Yes, I know that the financial media largely celebrated the third-quarter initial estimate for GDP of 3.5% as if the U.S. economy had just won some kind of significant championship. The headline seemed to be the robust 4.0% annualized growth rate for Personal Consumption Expenditures. I'm here to tell you that while this does appear powerful, there are more than a couple of dents in the economy from a macro perspective, so sit tight.

From the same GDP report, I guide your eye down to Current-Dollar Measures. Final Sales of Domestic Product printed at growth of 3.1%. That's interesting because it comes off of 8.6% second-quarter growth, and is the slowest pace of growth in that particular measure for final sales since the fourth quarter of 2016. Slide down to Final Sales to Domestic Purchasers. That number hit the tape at 4.9%, down from Q2's 6.5%. Combined, I'd say that these reports suggest consumption was pulled ahead of tariff implementation. Disposable Income grew at the slowest pace since the third quarter of 2017, by the way.

No, we are not close to recession, but I want each of you cognizant that the boom we have enjoyed to this point is slowing, and might be slowing hard. The Federal Reserve, by way of their ridiculous dot plot, expects GDP to slow down to 1.8% by 2021 (while raising short-term rates the whole time).

It looks more likely that the central bank has set about engineering this slow down, though the moderation of economic growth clearly, and I scream CLEARLY, lies outside of the Fed's dual mandate. This is simply not their job. Those of you who have been with me a long time know that I have been just as critical when the Fed was easing.

I think subtle interference with free market pricing is bad enough. Aggressive manipulation of the price point where available credit and time cross paths is unethical, in my point of view. This forces a skewed understanding of risk for all involved.

Meanwhile, the rate of growth for both headline inflation as measured through the Consumer Price Index, and core inflation have been in steep decline since peaking in July. We'll see PCE Price Index data for September today. A slowdown is expected there, too.

The most alarming item, besides the obvious move past peak that most are well aware of for both the housing and autos space, is business spending. Go back to last Thursday. Within the Census Bureau's Durable Goods Orders release for September was a second straight month of contraction for Core Capital Goods, and second straight month of stagnation in shipments for such goods, as well.

Looks like everything -- from those already mentioned tariffs to Italy, to cautious guidance on earnings calls, to political risk related to the coming mid-term elections -- is being priced in. While many individual names from the tech space -- such as Nvidia (NVDA) , a long that I have started rebuilding, and Amazon (AMZN) , a core long still on my book -- are mired deeply in a bear-market condition, the indices themselves are stuck in a confirmed correction and could be at, or close to, a point of inflection.

The Longs Do Have a Technical Ally

Now, stick with me. This gets just a little wonky. Many are calling for a retest of the February lows for the major indices. They may be right. Then again, a lot of cash has been moved. Any trader buying back stock now has successfully extracted capital from the market. My example is the above mentioned NVDA. The longer uncertainty stretches out, and the longer the FOMC overplays their hand, the greater the risk. No doubt.

However, there is evidence that the sellers are exhausted, that this pressure that we have felt may abate shortly. You kids have heard of what is known as a "bullish divergence" correct? By definition, a bullish divergence is created when price points reach a new recent low, while at the same time an oscillator fails to do so. This is often taken by technical traders as a signal that a low has been, or is close to being, put in.

You will find a reading for the Relative Strength Index on just about every chart that I work on. The RSI is a momentum oscillator that crosses velocity with price movement in a (typically) 14-day window. Well, last week, all of your favorite indices put in recent lows -- the S&P 500, the Dow Jones Industrial Average, the Nasdaq Composite, the Russell 2000 and even the Dow Jones Transports.

Yes, all of them, and you know what? In each and every case among those five, Relative Strength bottomed out for the week at a higher low. Interesting? Definitely. Certainly worth noting if the low actually did or does hit right here in late October. I leave you with this image of the S&P 500. Focus on the upper right hand corner. This worked last week for all five of those indices. 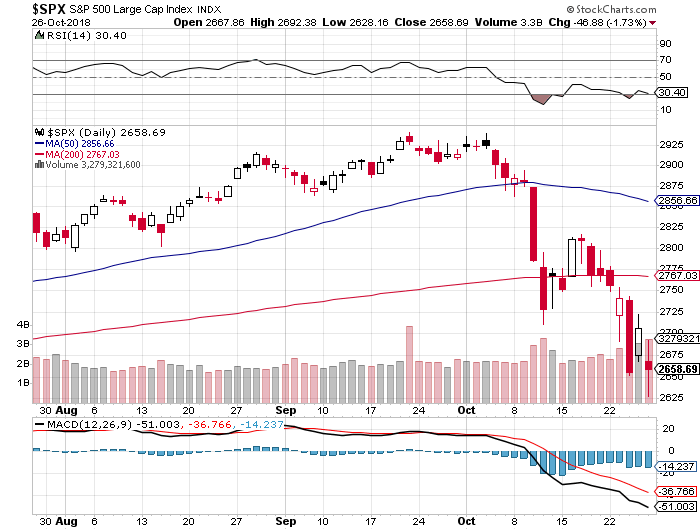 Unless you completely tune out on weekends, which by the way, seems like a good idea these days, then you are well-aware that International Business Machines IBM will dish out $190 a share in cash for software (not to mention cloud player) provider Red Hat, Inc. (RHT)  -- for a total value of $34 billion. For those of you who went home long a stock that closed on Friday at $116.68, I congratulate you. This 63% premium seems like something out of fantasy land to someone who did not go home long those shares.

IBM CEO Ginni Rometty called this deal a "game changer." She also said "IBM will become the world's number one hybrid cloud provider." Red Hat was one of those "bear market" stocks that I was referring to earlier. Down 34% from the high, I guess the iron was hot for Big Blue, a firm that clearly underwhelmed in cloud performance for the quarter just reported. For Remetty, this has the feel of a long pass toward the end zone as time expires. For IBM shareholders, I am hopeful, but I'll watch before I take a bite of this sandwich.

Obviously, this deal, even if it does come to bear that IBM paid too much, will put the firm in a more-competitive position as far as cloud computing is concerned. Whether or not any market share is actually drawn away from Amazon (AMZN) Web Services, Microsoft's (MSFT) Azure, Alphabet (GOOGL) , or Alibaba (BABA) is something already extremely patient investors will have no choice but to sit on.

One name that has been down since reporting their Q3 results on October 16 is UnitedHealth Group (UNH) . 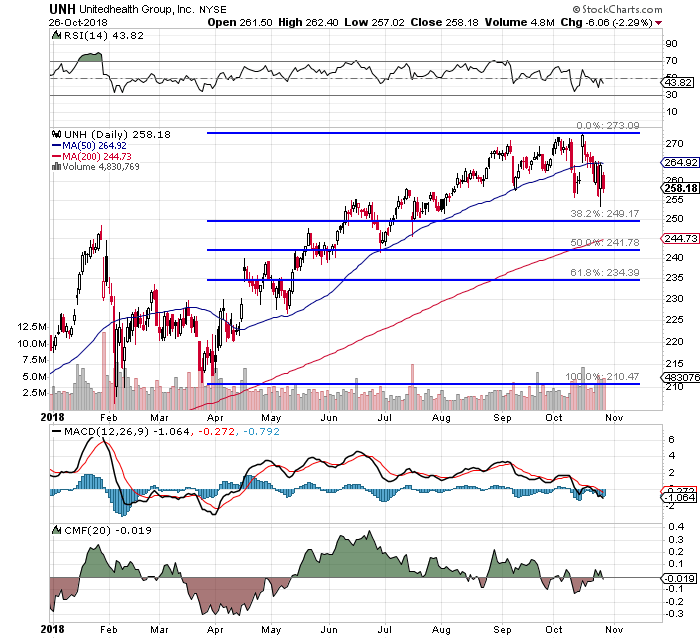 I'll let you in on a little secret. I have been trying to buy this name at deeper discount than the shares have offered me since last Wednesday's late selloff. No dice. This name, weak as it has been at 5.4% off of it's high, has significantly outperformed both the S&P 500 and the health care sector over the course of this awful month. The firm did, after all, beat expectations for both EPS and revenue, while increasing guidance for the full-year EPS above the higher end of the previous range.

The stock currently trades at 17.7x those forward-looking earnings. That looks to be a smidge more expensive than the sector, but upon close inspection is actually right in line with the managed health care subset within the larger grouping. Keep in mind that perhaps because most of the planet has socialized health care, this firm is nearly as domestic in nature as would be most "small-cap" firms. That means no impact from trade wars and no impact from dollar strength. Hence, this one should have already been in the portfolio. My bad.

Do I buy some here, now that I have laid out a case for equity market support? I do think that this name could make another run at its 2018 highs. I also understand that this stock may need to test the 249 Fibonacci level. This firm reports again on January 14, and pays shareholders 1.36%.

For the Less Bold:

If the shares never sink that far, the trader pockets $768 to help with holiday shopping. If the same trader is forced to eat these shares in January, the trade will run with an initial net basis of $242.32. The trader would obviously, at that point, then sell a call against the long equity stake, further reducing basis.

Get an email alert each time I write an article for Real Money. Click the "+Follow" next to my byline to this article.
TAGS: Investing | Global Equity | Financial Services | Healthcare | Earnings | Markets | Newsletter | Politics | Stocks