There are many ways to make money in the market. One of my favorites is simply to play with shares that appear clearly mispriced vs. their corporate fundamentals.

How can you know that is the case?

Compare easily verifiable metrics with the stock's price performance over time. When shares have lagged the actual value created, there is often opportunity. The more disparate the valuations, the greater the potential gain.

Two that jump out at me in this category are Sally Beauty Holdings (SBH) and Francesca's (FRAN) . Both have clearly made tons of measurable progress over the years. Neither is currently respected, or getting credit for that, in the market.

Since 2010, SBH has almost doubled its sales per share. Cash flow and earnings did even better, rising 157% and 133%, respectively.

There are no obvious problems with operations. In fact, fiscal 2017 (ended Sept. 30) is expected to have set all-time records when fourth-quarter and full-year results are released in early November.

Since 2012, there were four chances to sell SBH at prices from $31 to $35. In two other recent years, SBH peaked at $27 to $28. A simple return to those levels would provide large-percentage gains from Wednesday's quote of $17.47. 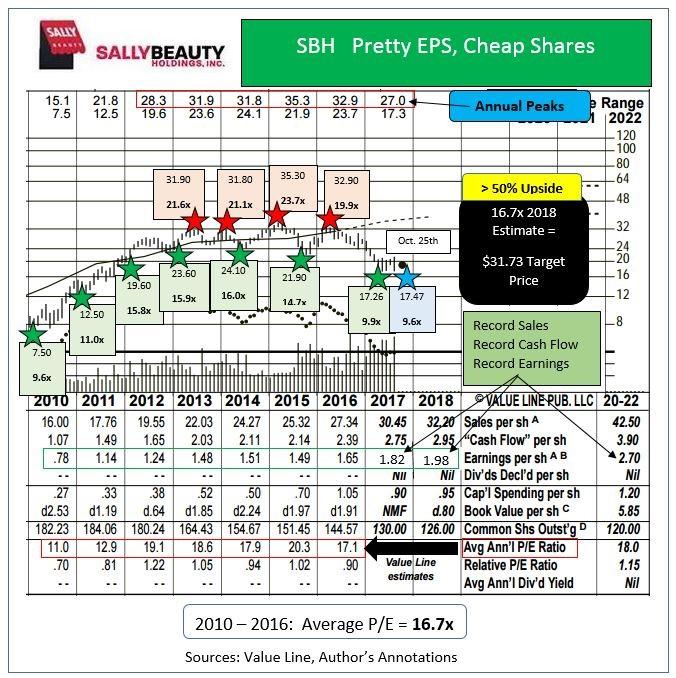 All SBH needs to reach $30 to $35 within 12 to 18 months is a regression to the mean valuation. Insiders, including the firm's CEO, have been heavy buyers. No insiders have sold in recent months. 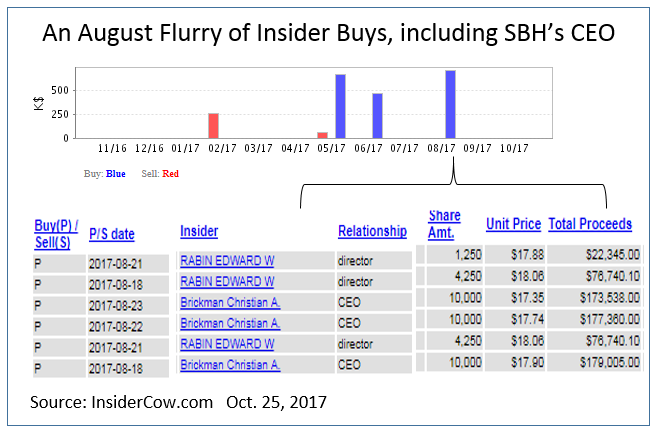 SBH's trailing P/E last Wednesday is tied for its lowest since the dark days of 2008-09.

I've been accumulating shares and selling puts on weakness. Sally's June 15, 2018, puts offer nice premiums along with reasonable margins of safety. SBH hasn't actually changed hands for as little as $16.50 since 2011. 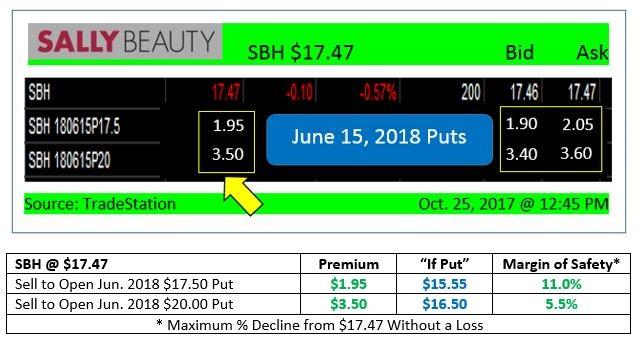 The company's fundamentals belie the extraordinary price movements. EPS growth has been spottier than Sally Beauty's, but FRAN has always remained profitable. Revenues and cash flow are up dramatically since the company's 2011 IPO. Profits are higher this year than in 2011, even during a relatively poor year.

The stock, rationally worth way more than six years ago, is down about 72% from its Oct. 25, 2011, quote. That's what I call a truly mispriced stock.

Analysts think this year's earnings disappointment will be temporary. Value Line expects FRAN to show EPS of about $1.75 no later than 2022.

The stock has never been offered with a more reasonable multiple. A partial pick up to a still-below-average, for FRAN, P/E of 16x could easily support a 12- to 15-month goal price of $12.80.

Option sellers can get paid generous premiums for committing to stand ready to own FRAN even cheaper. Worst-case, forced-purchase prices on the June 15, 2018, expiration date $7 and $8 strikes drop the "if exercised" net entry cost to either $5.60 or $6.05. 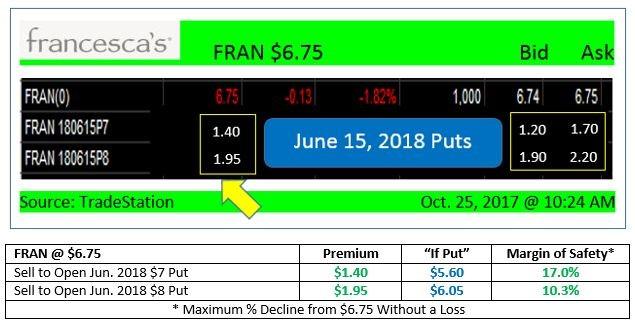 Future stock market action can never be guaranteed. We can know for sure, though, that either break-even point falls below FRAN all-time lows. This debt-free, money-making company is not in danger of disappearing.

A return to its early 2017 level would represent a 188% profit for those brave enough to buy now, when others are fleeing the shares.

Deciding between Sally and Fran proved too tough a choice for me. I'm going out with both girls and hoping to get lucky.

Buy both stocks, sell some puts or consider doing some of each.

The following article originally appeared Oct. 26 on Real Money Pro, our dynamic site for active traders. Click here to get great columns like this from Paul Price five days a week.

Get an email alert each time I write an article for Real Money. Click the "+Follow" next to my byline to this article.
TAGS: Investing | U.S. Equity | Consumer Discretionary | How-to | Options | Stocks