"Sweet are the uses of adversity, which, like the toad, ugly and venomous, wears yet a precious jewel in his head." -- William Shakespeare

We'll get back to the snap later, but Thursday certainly provided those of us who have a passion for the marketplace with some crackle and some pop. On top of the roller coaster rides offered by earnings season, there was sound, fundamental reasoning behind Thursday's perceived level of positivity. The excitement kicked off early, as the ECB met expectations for forward-looking monetary policy across the eurozone. The ECB would downsize their monthly quantitative easing purchases from the current €60 billion in half, to €30 billion come January. The program would be pushed out 'til at least September. Both of these announcements were priced in. What was not priced in was the dovish press conference. Super Mario really is at his best when trying to talk down the euro, and that is precisely what he did.

Traders wanted to hear something on interest rates. After all, the ECB had thought itself in position to raise rates in both 2008 and 2011. In both of those instances, the central bank was forced to admit policy error and reverse course. Unemployment? Down. Growth? Up. Inflation? Not close to target, but not much different than in the U.S., where the central bank is well into a tightening cycle. Uncertainty is what Draghi will use a crutch to slow things down and to push things out. Brexit, Spain and Italy all provide enough questions marks to keep rates where they are, and for the central bank to commit to possibly boosting QE purchases if need be. When asked about September, Draghi implied that the European economy will not be forced to go "cold turkey". Maybe at that point, he will call a downsizing what it is: "a tapering".

Let's not forget that in relation to net issuance of sovereign debt, the ECB's quantitative easing program has been many times the size of the similar program run by the Federal Reserve. As a chain smoker heading for the door would say: "What's one more going to do?" I don't know. Maybe cost you down the road.

Equity markets were also pushed in a northerly direction (as debt markets went south) by progress made on hopes for tax cuts this year. The House on Thursday adopted a budget resolution that had already passed through the Senate. The vote was close, as the budget passed by a 216 to 212 margin. All Democrats and 20 Republicans voted against the measure.

The obvious sticking point for those voting no is the expectation that a final plan tax plan will limit or repeal the federal deduction for state and local taxes. That is why a majority of Republicans voting against are from typically blue, or what one would refer to as heavily taxed states.

There are two important takeaways here. One, the potential for a filibuster has been busted, so to speak. A tax plan may now be passed by simple majority, as long as the plan does not project increased deficits beyond 10 years. I think that is fantasy, but to be honest, I am willing to play with fire in exchange for a sizable tax cut. Heck, I would even gladly move my business out of New York State, so the state and local tax caveat would only be an initial inconvenience as far as I am concerned.

Secondly, both House and Senate leaders have expressed a desire to get final legislation on tax reform passed by Thanksgiving. This gives our esteemed legislators just 22 days to get something major that they do not really agree on, signed, sealed and delivered. Fat chance? Not if they bear down, and display a work ethic like that of common folk. OK, fat chance.

Still About the Dollar

How will prospects for a tax plan impact the dollar? Well, how will federal budget deficits be impacted, in truth? Larger deficits typically weaken the home currency. Then again, the greenback is experiencing a technical rebound here in late October. I think that bounce is likely to run out of steam before the DXY hits 96, and as Mario Draghi's magic wears off a bit. On top of that, domestic economic growth, as well as a lower tax rate on repatriated dollars should (you might think), increase demand for U.S. dollars. In other words, the trend for the U.S. dollar is still to the downside, despite recent moves and the still dovish central banks in Europe and Japan.

Bottom line: Leave open the possibility that we just don't know here. Nearly every currency expert not named Douglas Borthwick was flat wrong about the dollar after the U.S. election last year. The current U.S. president is a "weak dollar guy", and on top of that, you may have noticed that we have been in a currency war for a very long time. For a road map, read the book. James Rickards wrote it. If you're new to this sport, you can use Google. I'll wait here.

You kids see Amazon (AMZN) last night? 35% sales growth for North America; 29% globally. Operating cash flow flowed to a 14% year over year gain. Operating income did fall, but far less than expected. Amazon Web Services? Rocked it. A 42% year-over-year gain to a mere $4.58 billion. The stock ran more than 7% after the close. That's right. A stock that trades around a thousand bucks a share ran more than 7%.

How about Action Alerts PLUS charity portfolio holding Alphabet (GOOGL) ? See that one. Bottom line there? This is still an advertising company, though they do many things at an elite level. Google Properties grew 22.5%. What the firm calls "Other Revenue"(Pixel, cloud services) grew by 40%. The firm continues to make progress on the creation of what I call a virtual mall that would include the likes of Walmart (WMT) and Target (TGT) , or basically an uneasy alliance of all of those who have not surrendered to Amazon. This next item is huge.

Though there is less money to be made per click through advertising on the internet than ever before as mobile has taken share away from desktop, Google advertising revenue increased by 21% year over year, as aggregate paid clicks grew a ridiculous 47% over that time. Think of the massive base that this 47% growth came from. This firm is healthy, and the stock ran more than 3% overnight.

Charts of the Day: The Bad (MAT) and The Ugly (CELG)

Where does one catch a falling knife? Should one even try. Is there a sweet spot that makes either Mattel MAT or Celgene CELG look attractive? Jeez Louise, maybe we should take a look at the charts.

The chart below indicates that despite some positive institutional money flow coming into earnings, there is not an apparent, or even hopeful support level that makes itself visible. The only hope is the cost-cutting program being pursued by CEO Margo Georgiadis. Hasbro HAS remains the better play if you must play this space, despite all of the uncertainty around Toys R Us. 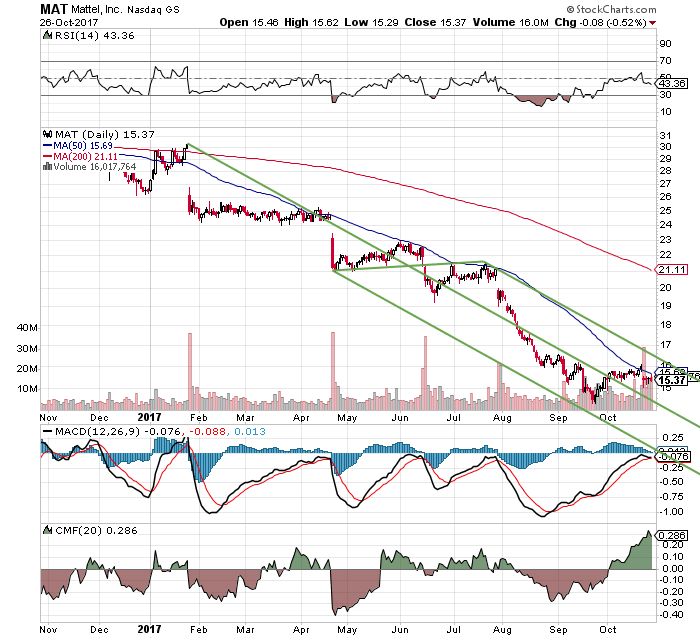 The selloff that shareholders have seen in Celgene (CELG) is truly catastrophic. The firm beat EPS expectations. Revenues missed, but still grew more than 10% year over year. The firm's fumble last week on its Crohn's disease new drug application is now well known, and has caused the firm to steer 2017 revenue guidance toward the lower end of the range.

Is there a spot to buy this one? Well, the answer, unlike with MAT, is a definite maybe. The stock closed just around par Thursday night, after a brutal beat-down. Take a look at this chart. Print it out, and we'll discuss below. 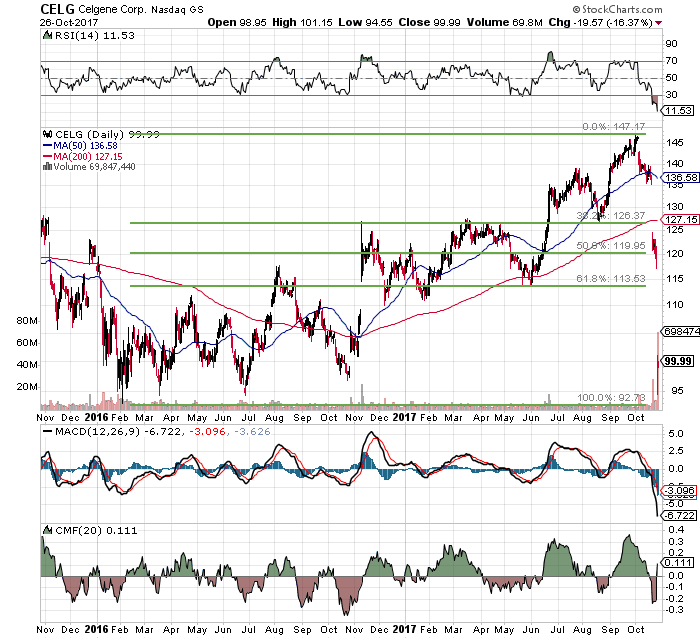 What does Sarge see here? I see a Relative Strength of 11, which is absurd for a firm not being accused of anything. Badly oversold. Institutional investment had been healthy prior to last week, indicating that a lot of folks have recently tried to squeeze through a small hole. Some of them may have cooled their jets if they had humans steering the ship. The moving average convergence divergence (MACD)? Don't even go there.

My point is that there may be a technical bounce from here. The environment is also likely far too dangerous for the retail investor to "take a shot". You can still make money here. Think the stock will stay around $100 a share? Me neither. I don't like to purchase options, as you know. I like to write them. However, opportunity like this is unique. Depending on where this thing opens, we'll use $100 as that is close to where it went out, but adjust that to the open.

If you think this stock will move more than two and a half bucks on Friday, or more than five bucks in a week's time, then you just may want to take a look at the purchase of a simple straddle -- an option to buy and to sell the security at the same price on the same date -- expiring either tonight, or next Friday. Go out further than that, and this idea becomes potentially expensive for the retail trader. This idea, though, is a way to take a non-directional shot in a name expected to display short-term volatility, while not exposing oneself to inordinate risk. Just a thought, kids.