Maybe you bought Dow Chemical  (DOW) in the past year or two for its relatively attractive dividend. Maybe you like the fundamental story (DOW is a holding in TheStreet's Action Alerts PLUS portfolio). Whatever made you click "BUY" it is OK because DOW's charts of look really bullish. Did I say really bullish?

Let me show you some interesting charts.

In this daily chart of DOW, below, I want you to put your thumb over the two-day spike in December in the $54-$57 area. Yes, I am guilty of "editorial license" with the chart and erasing two days of price action. It can be a slippery slope if you don't stop, but I have will power after spending my formative years at a military academy. By ignoring the previous high in December today's new high for the move up looks like a major breakout. I am not talking about a breakout from a seven-month consolidation since April but a two-year pattern (look at the weekly chart further below).

DOW is above the rising 50-day average line and the rising 200-day line. The On-Balance-Volume (OBV) line has generally been moving up from it's January low so we count it as positive. It is hard to see on this chart but the Moving Average Convergence Divergence (MACD) oscillator just moved up above the zero line for an outright go long signal.

Not impressed? Look at this Point and Figure chart, below. 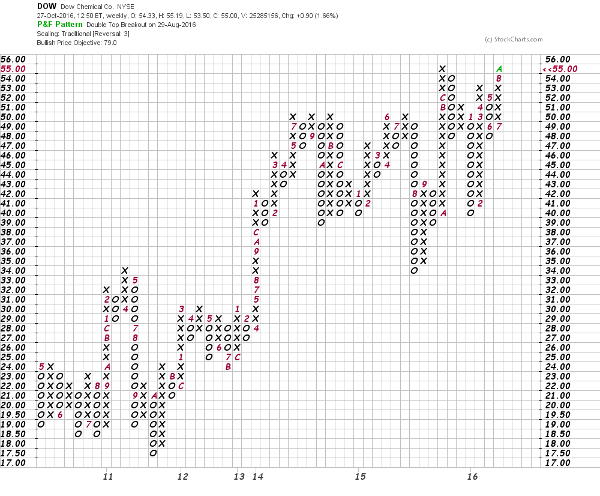 In this weekly Point and Figure chart, the breakout at $56 (soon I hope) will give us a potential longer-term price target of $79. Let's round up to an even $80. A close back below $51 will turn our charts neutral.

Get an email alert each time I write an article for Real Money. Click the "+Follow" next to my byline to this article.
TAGS: Investing | U.S. Equity | Basic Materials | Industrials

The charts and indicators of the metals producer are positive going into its fourth-quarter results.

General Electric Isn't Out of the Woods Yet, Here's How I'd Trade it

GE remains a cash flow based story, but I see two negatives.