The major equity indices looked okay for one day. I am willing to guess that most of you were well aware of the Amazon (AMZN) third-quarter earnings release that put foreign equities and U.S. futures markets back in their place. Clearly, the risk-off sentiment that has become pervasive on the street is alive and well, and it's not just a high profile revenue miss, or some lighter guidance.

Those items are significant enough in their own right, but they are the symptoms of a changed environment. Even the defense contractors -- many of whom I hold long positions in, and I would have thought might benefit from broadly increased global defense budgets -- have simply been routed.

We all know what's going on. On Thursday, though the markets largely shrugged off the information during regular trading hours, the weight of it all became too heavy overnight. The big concerns for most corporations have been margin compression, or rising expense levels, thanks to both the ongoing trade conflicts, particularly with China, as well as an aggressive monetary condition.

News broke on both of those fronts yesterday. While the Wall Street Journal was reporting that U.S. officials need "solid proposals over forced technology transfers" in order to resume talks on trade, we also heard from Federal Reserve Vice Chair Richard Clarida, who made his first public speaking appearance since taking that position.

Richard Clarida made it clear. He hears no alarm bells "at the moment" as far as consumer level inflation is concerned. Still, Clarida seems as hawkish as most of his mindless colleagues do at the central bank. In a statement that caused a temporary wiggle in stock prices when made, the vice chair said "If the data come in as I expect, I believe that some further gradual adjustment in the federal funds rate will be appropriate."

In case you do something else for a living, the FOMC has increased its target for the Fed Funds Rate a full percentage point since last December. The expectation is for this overnight rate at which banks lend reserve balances to other banks to rise again, to 2.5% this December. Call this pace whatever you want, but calling this gradual is obviously misleading.

With the Fed's dual mandate in good shape -- stable prices, close to maximum employment -- why would the central bank deliberately slow economic growth? Do they simply see something that I don't? That is entirely possible, I will concede. To coincide higher short-term rates with the regular withdrawal of potential liquidity (Quantitative Tightening) just seems so dangerous to me. I have been well ahead of Wall Street on this, and consistent in my stance.

They say that they still see a robust economy. I see housing numbers mired in terrible decline. I see troubling levels for auto sales. How will the retailers traverse this holiday season amid higher tariffs? We have already witnessed a significant drop-off in inventory building at both the wholesale and retail levels. Does that mean that consumption at those levels was likely pulled forward by expectations for a protracted trade war? My best guess is a big fat yes.

I have, over recent weeks, tried to move toward a more-defensive portfolio, and have urged my readership to go the same route. Unfortunately, the marketplace has not afforded us very many rallies off of which we could scalp some cash. For me, that remains my plan. Like I wrote to you twenty-four hours ago, high-dividend payers with a solid track record for paying those dividends are now like gold to us.

The Census Bureau hit us with a solid headline beat for September Durable Goods Orders. The problem is that the headline number presented a hollow victory. The print becomes far uglier once the veils of defense spending and transportation purchases are lifted. Core Capital Goods Orders, the most important slice of this report as far as business investment is concerned, hit the tape in a state of contraction... yet again.

That said, the BEA will print their first estimate for third-quarter GDP this morning. If it looks decent at the headline, those first-level thinkers at the central bank will believe that they are justified in the pace of their trajectory. Then, they will set about harming us all.

The most obvious victim of divergent monetary policies has been the U.S. dollar. If trade wars don't kill off U.S. multinational corporations, exchange rates surely will. The scariest thing I see is the one-month performance of the Russell 2000. That small-cap index that should not be impacted to a significant degree by tough exchange rates has led the way lower, at -11% over that 30-day period. Oh, that must be the result of higher input costs, which can also to some degree be blamed on rising expenditures on interest. Hmm, remember that's without anything within the Fed's mandate visibly forcing this hostility. Moderating economic growth is NOT, I repeat NOT their job.

A Bridge Too Far

While I was fortunate enough to exit my Alphabet (GOOGL) long this summer, and have traded Amazon (AMZN) fairly well, I do have a core position in Amazon -- and that one is clearly going to leave a mark on the old P/L today. I had written you on Thursday that I would add to AMZN in between $1610 and $1666, and I did, ahead of the earnings call last night, at $1616. I took that trade off at the end of the call, however, for a pedestrian profit, unwilling to come into this morning's action with increased equity exposure beyond what I consider to be that core. That said, I am going to watch this thing trade before I make another capital decision.

I find the forward guidance troubling. While I rejoice in the gains made by Microsoft's (MSFT) Azure, it appears from 40,000 feet that while AWS is still growing very nicely, perhaps AWS is losing some ground to number two in the cloud space. Needless to say that I am suspending my AMZN target price of $2100, as that number has become for me "Operation Market Garden."

I will have to rework my levels for this name over the weekend. I do not think Amazon is finished in any way. I am also unsure that I want to lay out any additional capital other than short-term rentals in this space. I would think that a lot of us still have long-term gains to protect here. That is not a positive.

One name that I will have no problem taking a pass on will be Snap (SNAP) . There was a minute or two there before the last bell went off at 11 Wall Street, where I thought that this firm might just beat earnings projections. Guess what? SNAP did beat earnings projections, as well as revenue expectations on substantial year-over-year growth. The revenue print was the most ever for one quarter for this firm. That's the good news.

The bad news is that this firm had never posted a quarterly profit, and still has not. SNAP printed a net loss of $-325.15 million for the three-month period, and that's not all. The parent firm's flagship social media site, Snapchat, lost two million daily users over that time -- dropping this highly focused-upon user base to 186 million globally.

The firm clearly knows that they have a problem. Earlier this week, they announced some high-profile hires from Amazon and the Huffington Post that appear to be aimed at improving both corporate strategy as well as advertising sales. As an investor, there is no longer a lot of downside to this firm, but six bucks is six bucks. You don't want to throw it away. Let's take a look. 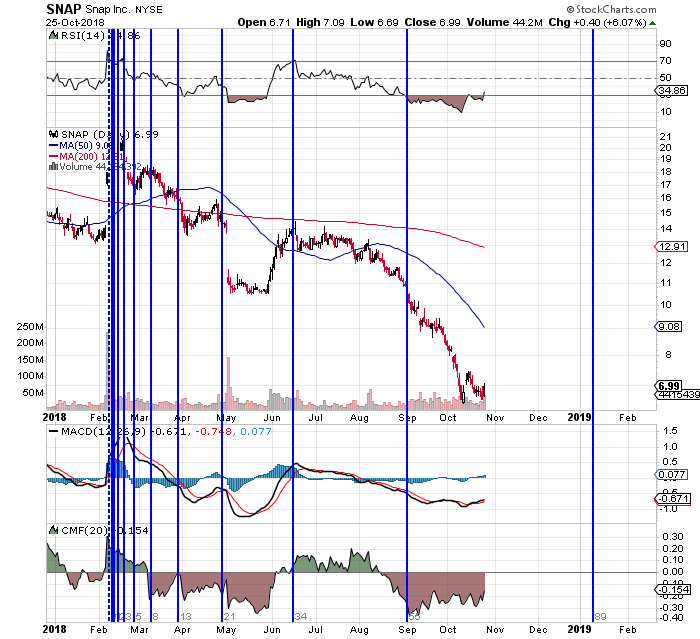 I tried all of my technical tricks on SNAP this morning, really just trying to find a way to take advantage of such a low-priced equity. We could just buy the shares, but if I am not willing to buy this name outright for the "Stocks Under $10" portfolio, then I am not going to tell you to buy it either.

Then I tried the Fibonacci Time Zone model, and I started the model with the upward spike of last winter. Whoa, something clearly changed in the underlying technical condition for this stock with the passage of each timeline. Spike lower in early May coinciding with weaker Relative Strength. Similar move in mid-June. Sharply more negative Relative Strength in early September.

Hmm. if the pattern holds, something stupid is likely to happen in early January. That's a few weeks ahead of the firm's next earnings release. Perhaps, if this name is not worthy of an equity stake -- and let's face it, they don't even let shareholders vote on corporate matters, so why bother -- maybe we can get away with something cheap in the options space.

Okay, even though I have sold AMZN out of the money puts and traded well enough around the core, I'm still going to take one on the chin this morning. Last night, SNAP $7 January calls went out at $0.94. My thinking is that a trader might just get those calls for a song this morning -- and with SNAP's recent hires of some competent leadership, the next spike in market value could actually be northerly.

That said, in this morning's environment, if the trader ends up wasting a few cents over a three-month window, it may amount to nothing more than throwing a deck chair off of the Titanic. So what.