"The risk of a wrong decision is preferable to the terror of indecision." -- Maimonides

The S&P 500 gave up one half of one percent; 11 sectors lined up and marched into the arena; 11 sectors came home bruised and battered. The fact is that the Dow Jones Industrials, the Nasdaq Composite, and the Russell 2000 all gave up close to half of one percent, after all having been lower than that. The buy-the-dip crowd? They might have dragged their collective feet a bit this time, but they did show up. A little profit-taking only makes sense at junctures like this, with a few earnings coming in a tad wobbly and yields spiking the way they did early on Wednesday. Remember that bumps in the road are normal. They haven't been normal lately, and they do not feel very good. However, as the forces that have artificially impacted the marketplace return to normal, so will the marketplace itself.

What's funny, at least to this guy, is that what caused that selloff across the Treasury space is precisely what will keep the stock market on trend going forward. You know what's good for the economy, and a sign of a healthy business environment? Core capital goods orders, that's what, and that line does not get enough media attention when durable goods orders are reported by the Census Bureau each month. Headline durable goods crushed expectations in September. Ex-Transportation? Ex-Defense? Crushed it. Core capital goods? It only seems like yesterday that American businesses spent nearly a decade finding ways to not invest in themselves other than through payouts to shareholders. Kind of hard to say anything negative about month-over-month growth of 1.3% and year-over-year growth of a whopping 7.8% though, isn't it? American business is back, and the economy is clearly strengthening.

What could screw this up? Oh, I don't know ... maybe interest rates that rise too fast. This balancing act will not be easy. It is also possible that fears of tighter monetary conditions are bringing activity forward to some degree. That could hurt later. You did see September new home sales, right? Strongest month in that space since November of 2007. The trader side of me is rooting for Jay Powell, or the re-nomination of Janet Yellen, while the economist side of me thinks very differently. That quieter side of my persona knows that a rules-based approach to policy is the correct way to go. So many possible Fed Chairs. So little time.

Everyone has an opinion, and this is another factor that has traders a little nervous. Speculation over what the European Central Bank announces on Thursday has been forcing both debt and currency markets into increased volatility over the past few sessions. What to expect? Although just about each and every broker-dealer that can afford an economist has published something on the topic, the smart money seems to be on an announced reduction in the ECB's monthly quantitative easing program. Most expect to see purchases drop from the current level of €60 billion ($70.8 billion) to something like €30 billion to €40 billion, and most expect that this further "tapering" (don't call it that) will not take place until January, giving investors plenty of time to digest the news.

Many in the field are also expecting Super Mario to offer a teaspoon of sugar to help the medicine go down in the form of an extension of this QE program. Perhaps an intent to carry the program out until mid or late 2018 will be announced. What investors really want to know is when interest rates will start to move in Europe. The short answer is "don't hold your breath, gang", at least not from this guy's perspective.

What does one do, when Mr. Market lands a sledgehammer sized fist on their jaw, or, better yet -- how does one prevent oneself from being slapped around by the markets when conditions do in fact get dangerous? These are the kinds of questions that seem to trickle in to my office at times like this. It's easy. OK, I'm kidding. It's not easy, but through doing the work, staying focused, and relying on one's self discipline. This is doable. Let me explain.

Some people play defense through diversification, which I endorse fully. This will allow your portfolio to avoid ruin when rotations hit the markets faster than you, the retail investor can react. I suggest something a little more aggressive than that. Why not multiple accounts, or at least multiple portfolios. Go ahead and write out a mission statement for each. Want to be elite? Or maybe you just want to eat nachos and play video games. Don't answer that.

By creating separate books with differing objectives, the idea will be to free your brain from over-thinking during times of heightened stress. By creating a dividend book, a fixed income book, a precious metals book, or any type of book that you think important, you can almost run these portfolios in the background. (Sort of like whittling down a $4.5 trillion balance sheet) This reduces cerebral clutter, allowing you to manage the one book that will be your main focus. Trust me. I'm not that smart. This is how I do it. I am great at nothing, but I am better than average at everything.

Now, one trick to actively managing your main book is to set three price targets (based on your homework) for every single position. Then, stick to those targets, even if you don't want to. What I am talking about is a target price, an aggressive target price (meaning that you are allowed to change your target one time, and one time only), and a panic point. The panic point is the spot where you decide that you have made a mistake, and the goal at that time is simply preservation of capital. By setting these levels ahead of time, there is no real panic at all, just execution of a plan decided upon prior to the entry of any emotional impact.

What to Guard Against

It is very easy to get sloppy in a bull market. It is also very easy to get lazy at any time. You might even walk away when you hit a rough patch. If someone pushed down your spouse or your child in the street, would you fight back? Would you remain vigilant? Then stay focused. The folks to your left and to your right, the folks who write the algorithms and are blessed with positions of privilege that give them greater levels of information than you might have, are in fact trying to take money from the marketplace. When you boil it down, they are trying to hurt you and your family. Stay tough, and bring both fists. This is not a nice sport.

Now, you can almost always hedge yourself through the options market. At least, in securities where there is a liquid market for their options. Many people will go the expense of purchasing options. Through experience, I have found that yes, while this does reduce risk, it also reduces principal through the deterioration of time premium. I absolutely despise buying options, and only do it as a hedge when I am extremely nervous over a particular position. (That does not mean that I will not take a one-sided shot this way in a FANG stock around earnings time). I would much rather sell (write) options against my positions. Doesn't this in a way, actually increase the risk, Sarge? Actually, yes. Sometimes. Far more often than not, one can reduce one's effective net cost though, and if forced to buy more shares at a disadvantageous price, you will have to live with that. I would not do something like this in a high-priced stock. Too much room for disaster. Still the way that I will often go about it.

Just One More Thought on This

After doing a little homework, you can also use what are called smart-beta ETFs as way to line your book. What I mean here is that there are ETFs that are designed to reduce volatility, while exposing themselves to the broader indices that will also pay a dividend. So... if you do not have the time, or the background knowledge to even begin to think about creating different books with different purposes, this is an easier way to attempt to simulate those same results. We'll talk more on this come Saturday, if you're at Jim's shindig (more on where and how at the end of this piece).

Chart of the Day: CBOE 10 Year US Treasury Yield

There are a couple of items that I think you can take away from this chart. First off, you can see what yields did after that death cross in July. This yield experienced a pretty serious bearish moving average convergence divergence (MACD) crossover at that time as well.

Well, you can see that we have just experienced such a bullish crossover in recent days. However, relative strength is at a level indicating an overbought condition, which means that 10-year notes themselves would now be oversold. The 50-day and 200-day simple moving averages are so far away at this point as to be irrelevant. 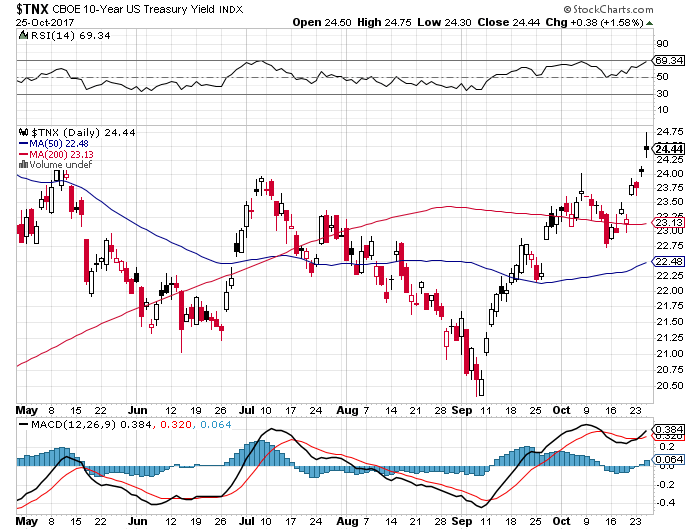 What this chart tells me, although the ECB may shake things up a bit, is that the 10-year has to re-test yields of 2.4% before it can move on. The recent moves are overdone. That does not mean that we are not headed to 2.6%, it just means that I think Mr. Market is going to try to shake you out of your financial longs. Good luck.

Get an email alert each time I write an article for Real Money. Click the "+Follow" next to my byline to this article.
TAGS: Investing | U.S. Equity | Financial Services | Economic Data | Markets | Economy | Interest Rates | How-to | Politics | Risk Management | Stocks

I Can't 'Affirm' That You Should Buy AFRM

AFRM could make an oversold bounce of $10 to $20, but let's look at the trend as a Real Money subscriber asks about the stock.