By BRUCE KAMICH Oct 26, 2017 | 10:01 AM EDT
Stocks quotes in this article: POT
Potash Corp. of Saskatchewan Inc. ( POT) looks like it is on the verge of an important upside breakout. Got your attention? Good, let's check out the latest charts and indicators to see what prices to focus on in the near term.
In this daily bar chart of POT, below, we can see that prices have rallied since early July recouping the losses from late January when prices peaked above $20 and dipped under $16 by mid-May. In the past four months POT has established a new uptrend above both the rising 50-day average line and the rising 200-day line. In early September we can see a bullish golden cross buy signal as the 50-day average crosses above the 200-day line.
The On-Balance-Volume (OBV) line has been rising from early July signaling more aggressive buying with heavier volume being traded on the days that POT has closed higher. The trend-following Moving Average Convergence Divergence (MACD) oscillator is above the zero line and just now crossing to the upside for a fresh outright go long signal.

In this weekly bar chart of POT, below, we can see a big decline from above $36 to under $16 followed by a long base pattern from early 2016. POT has found buying interest below $16 and is now above the rising 40-week moving average line. Prices have stalled at $20 a couple of times but with a strong-looking daily chart and this strengthening weekly chart a breakout over $20 looks like the "next move."
The weekly OBV line has improved the last four months and the weekly MACD oscillator is above the zero line for an outright go long signal.

In this Point and Figure chart of POT, below, we can see two recent peaks at $19.63 and another high at $19.82 in January. A breakout above these highs should open the way to further gains. A price target (conservative in my opinion) is projected to $23.90 or let's call it $24. The weekly bar chart (chart above) does not show significant resistance until the $30-$32 area, or a doubling from the recent lows. 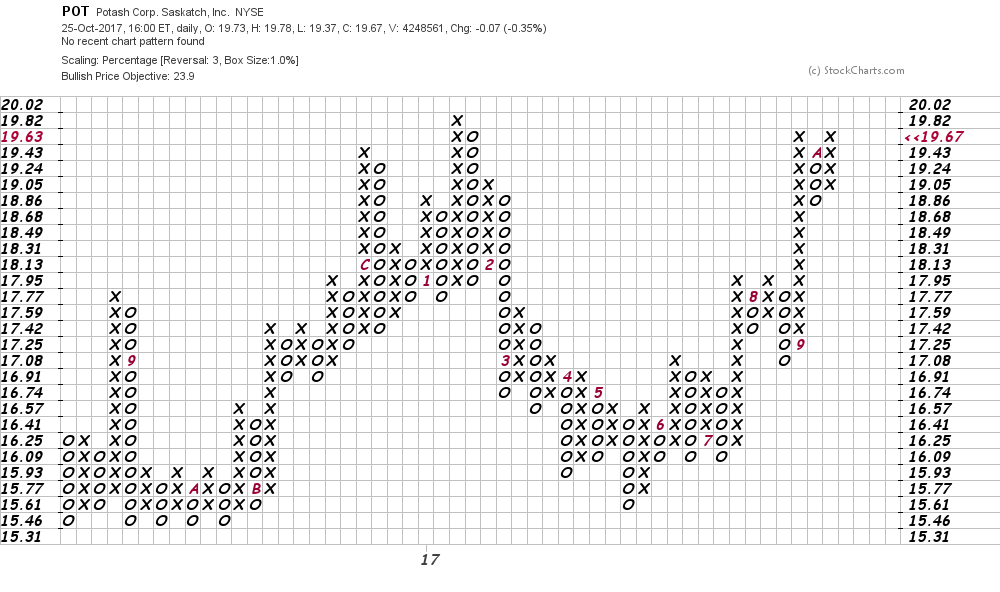 Bottom line: POT has made a large base formation that looks capable of supporting a good advance to $24 and probably higher. Aggressive traders could go long POT here and on strength above $20.50 risking to $18.50.
Get an email alert each time I write an article for Real Money. Click the "+Follow" next to my byline to this article.
TAGS: Investing | U.S. Equity | Basic Materials | How-to | Stocks