My trading is short-term, quantitative, and adaptive to current market conditions. When you shrink your holding time down to less than a day or even a few weeks, there are more data points (in one year there are approximately 250 separate daily data points for daily holding periods vs. one data point for a yearly hold). This allows for the large sample sizes necessary to do statistical inference and helps to make the future you wish to predict look more like the recent past you studied.

At the same time, I'm always interested in applying a numerate perspective to new timeframes, asset classes and forecasting ideas. Sometimes that might result in a tradeable signal, a meta-filter that can improve what I'm already doing, or familiarity with different research methods.

With that in mind, I was eager to explore a recession indicator suggested by Jeffrey Gundlach of DoubleLine Capital. After the Oct. 7 release of September's employment data, Gundlach said that one of his top three recession indicators had triggered when the unemployment rate rose above its 12-month moving average.

Here's a chart with the unemployment rate and its 12-month moving average from 1994 to the latest release. 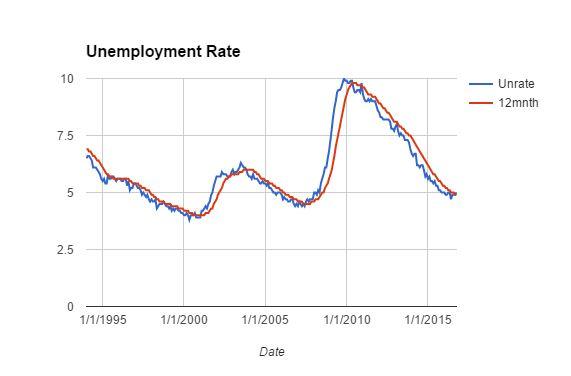 While Gundlach mentioned this as a recession indicator, I'm also interested in how it does as a stock market-timing tool. Below is a table with the forward 12- and 18-month returns for the SPDR S&P 500 ETF (SPY) on the seven instances when the unemployment rate has crossed its 12-month moving average since 1994.

This illustrates how the market can be so tough. Here's an indicator suggested by the head of a firm with $100 billion in assets under management that seems to capture something true about markets -- namely that rising unemployment leads to recession, which in turn is associated with large declines in the stock market.

In this study, the market rallied, on average, in spite of correctly anticipating two recessions. The accuracy faltered with false positives, such as a crossing in the fall of 1995 that led to 20% and 33% 12- and 18-month rallies and another in December 2010.

Another costly mistake was having a couple crosses late in 2002 and early 2003 near the end of the recession period. If we had had some sort of double-dip recession, this indicator would have looked especially prescient but as is, it signaled a recession after one was coming to an end and a rally was about to take hold. That illustrates why it is important to correctly specify your model and indicator.

I suspect Gundlach interprets this indicator as part of an ensemble or pastiche of other indicators and with some subjective judgment as well. Regardless, this bears watching, although it must be combined with other information.

Get an email alert each time I write an article for Real Money. Click the "+Follow" next to my byline to this article.
TAGS: Investing | U.S. Equity | How-to | Jobs | Markets | Stocks