Ben Stern and his wife Kate's French bulldog has had a really ruff 2-1/2 years. He's been hospitalized three times for pneumonia that puts him on a ventilator for days, has had several surgeries and has rung up some $165,000 of veterinarian bills. But fortunately, the poor pooch is one of 1.6 million U.S. or Canadian pets covered by animal health insurance.

The Sterns pay some $800 a year to cover their dog through Trupanion (TRUP) , one of 14 major animal health insurers who belong to the North American Pet Health Insurance Association. NAPHIA says the North American pet-insurance market has been growing 12% annually on average since 2014. That's not surprising because the American Pet Products Association estimates Americans will spend $15.92 billion on vet care alone in 2016.

Pet insurance has been around in the United States since 1982, when Veterinary Pet Insurance (acquired by Nationwide in 2008) sold its first policy to cover a dog playing Lassie. Plans like Trupanion's pay up to 90% of veterinarian charges for accidents and illnesses. Deductibles can apply, although policies often come without lifetime payout caps. That's making them more and more popular with pet owners.

"Pet medical insurance is a large and underpenetrated market," Trupanion CFO Tricia Plouf told Real Money. "It's no secret that Americans love their pets, and pet owners would do anything for their pets -- 88% would sell a possession to pay for a life-saving surgery for their pets."

Trupanion is currently the lone publicly traded pure play in the sector, and its shareholders have definitely been wagging their tails ever since TRUP went public in 2014. The company originally offered the public some 7.1 million shares at $10 each in July 2014, but the stock has shot up 43.1% since then to $16.31 as of Tuesday's close. The stock has done even better in the 12 months, up nearly 138%: 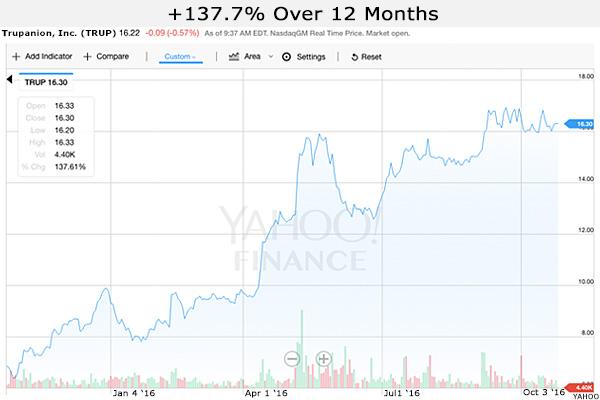 The company plans to report third-quarter results next Tuesday, with analysts expecting TRUP to disclose revenue of $48.2 million and a $0.05 per share loss. However, that's narrower than the firm's 17-cent-per-share red ink in the same period last year. For the second quarter, the insurer lost 3 cents per share but revenues rose to $45.8 million. That marked the 35th consecutive quarter of revenue growth in excess of 25%. CEO Darryl Rawlings also noted in releasing second-quarter results that Trupanion achieved positive free cash flow during the period for the first time -- "a guiding objective since our IPO and one that we are pleased to hit on plan."

RBC Capital Markets' Andrew Bruckner rates the shares as Outperform with an $18 price target, or some 10.4% above current levels. He said in a a recent research note that TRUP's second-quarter results continued to build on the firm's "already solid track record," and that the company has "the very attractive characteristics of a typical high-growth [Internet] company." Bruckner told Real Money in an interview that he expects Trupanion to see revenue growth in the high-20% range for 2016's second half, with the potential for 30% growth in fiscal year 2017.

Barclays' Christopher Merwin also expects TRUP's positive cash-flow momentum to continue into the third quarter and 2017. "As Trupanion continues to steadily grow top line, we are seeing the benefits of scale over its fixed-cost base," Merwin wrote in an Oct. 13 research note .

The analyst expects 27% top-line growth and other factors to help drive free cash flow to $2.7 million in the third quarter. He anticipates free cash flow will dip slightly negative in the fourth quarter, but then rebound in 2017 to around $4.9 million. However, Merwin currently rates TRUP at Equal Weight with just a $15 price target.

While Trupanion is currently the market's only pure play on animal-health insurance, larger publicly traded companies such as Allstate (ALL)  and Progressive (PGR)  also offer pet coverage, although neither breaks out the segment's results. Nationwide and other large and small non-publicly traded insurers offer policies as well.

Embrace spokeswoman Jenny Oliver says there are no immediate plans to go public, and RBC's Bruckner doesn't expect any other pet insurers to stage IPOs either. That leaves Trupanian as the sector's only publicly traded pure bet for now.

As for the Sterns' pet French bulldog, he's doing fine -- and his owners are happy because Trupanion covered 90% of the dog's medical bills, or some $150,000 in total. In fact, the Sterns like the company so much that they bought 10 shares of TRUP stock. As Ben Stern noted: "There is no way would could do this on our own."

Get an email alert each time I write an article for Real Money. Click the "+Follow" next to my byline to this article.
TAGS: Investing | U.S. Equity | Healthcare | Earnings

A Correction in the Share Price of Tenet Healthcare Appears Over