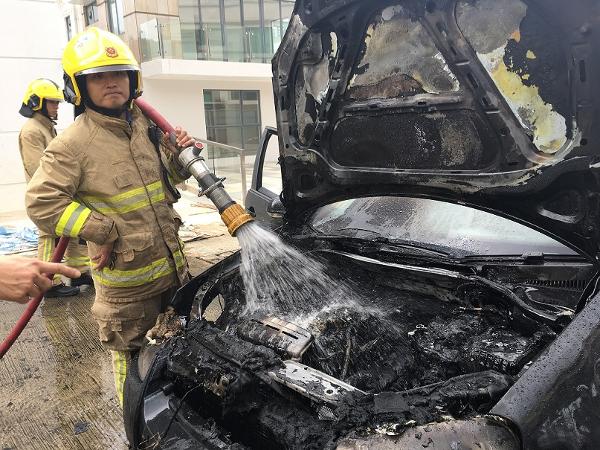 By strange coincidence, my Volkswagen Golf went up in flames today. Literally. Fire burned the engine to a mess of twisted metal and plastic.

It's odd timing. Volkswagen (VLKAY) just paid $14.7 billion in one of the biggest corporate settlements in history to settle its diesel-engine emissions-cheating scandal. It's the largest civil settlement in history against a carmaker involved in misconduct.

I'm not saying the two are connected. My car isn't even a diesel. Hmm, wasn't even a diesel. But it's still incredibly funny timing. Not funny for my bank balance, because I only had third-party insurance. Yet I actually found the whole episode fascinating and scary, and remarkably on point.

Not only has Volkswagen just had to fork over billions, but Samsung Electronics KRX:005930 has just wasted billions, too, for its double faulty recall of its Galaxy Note 7 smartphones, which turned out to be dumb and also prone to burst into flames. I explained immediately that the fiasco will be taught in business schools as what not to do with a defective product.

But, back to my car. I had just taken my kids to school, then returned home to take my wife to tennis training. I smelt something funny as I reversed out (it wasn't my wife -- she hadn't played yet). Then as I moved the car into gear, smoke started wafting out of the engine. "That's not a good sign," I thought.

I opened the hood, and smoke flooded out. When it cleared and I looked closer at the engine, I saw flames starting to come out of the oil tank. I took out the dipstick to see if there had been oil in there. But there was plenty. In fact, that was the problem.

I considered opening the oil tank for a second. I put my hand to the cap, but as a flashback to the movie Backdraft flickered into my head, figured maybe I shouldn't open a cap that already felt very hot. And had fire coming out of it.

That's when the flames got real. They started crackling out as the oil fire spread. I briefly considered getting a bucket of water, before sense told me you should never throw water on an oil fire. Sand is the best thing, but where was I going to find a beach in my car park? And would that be much better, if I threw granules of sand all over my damaged engine?

My wife had already moved well clear to call the cops. I started to think the worst, that the car might actually explode, throwing debris all over the parking lot, smashing into my neighbors' cars, and me.

So I backed away, too. My wife had reached the fire department, too, and they raced to the scene. But they were too late. The flames were roaring now, flicking all over the raised hood. Then poof, blam, and then the pops of all the engine parts melting down, next the windshield cracking, the tires blowing, and the front of our car was no more. Thank god it stopped at the engine and didn't reach the fuel tank.

I was pretty surprised when the firemen arrived with only their masks and normal protective garb, and went straight to the engine. Didn't they have shields? What if it blew?

But they knew better than me. Once they got out the hose, they pumped flame-retardant water over and into the engine. The fire went out, the police and firemen asked a few questions. Nothing suspicious, I told them. "Your car might be a total write-off," the kind policeman told me. Might be? By now I knew that was a certainty.

Why go into all this detail? Well, actually it was pretty cool, to be honest. I had never in my life seen anything like that. I mean, maybe I didn't want it to happen to my car. But I had witnessed something incredible, and saw how brave you have to be to put on that firemen's uniform.

I also have a point about what product defects can do. "We're not getting another Volkswagen," my wife told me. "We should get something Japanese."

I loved that Golf -- compact and fast. But I'm not going to fight her on it. I did look up used Bentleys just now. A Baby Bentley is the only luxury car I would ever consider. It's a pipe dream. Fuel guzzling and highly inconvenient in Hong Kong's tight multi-story car parks, it would never work. Plus, I would have to hire a driver!

You've got so many options once your purchased product chooses to destroy itself. Why get another VW? I mean, they just lied to 475,000 diesel customers. Of the settlement, $10 billion goes on the buybacks and customer compensation. I wouldn't go anywhere near that stock now that the individual suits can start for folks who don't think that's enough.

VW's reputation was dragged further into the mire when it turned out "irregularities" in tests to measure carbon-dioxide emissions could have affected about 800,000 cars in Europe. It eventually said, after investigation, this affected only around 36,000 of the cars it produces. But which ones?

So start stocking up on Toyota Motor (TM) shares -- mind you, today was also the day when Toyota announced the recall of 5.8 million cars because of a potentially faulty air bag inflator made by Takata -- Honda Motor (HMC) , Mazda (MZDAY) , Hyundai Motor (HYMTF)  . These are the Asian carmakers best suited to take market share in mid-range cars from Volkswagen. Don't buy Mitsubishi, because they have been caught lying several times to the Japanese public!

I wouldn't buy a Samsung phone either, whatever the company does next. The TVs are pretty good, but not the company's reputation, not now.

So buy Apple (AAPL) . They're being beaten up over their latest disappointing profits. Next quarter and from here on out they're stealing Samsung customers. Buy Alphabet  (GOOGL) and its Google phone, Huawei and Xiaomi if and when they go public, too.

Get an email alert each time I write an article for Real Money. Click the "+Follow" next to my byline to this article.
TAGS: Investing | Global Equity | Consumer Discretionary | Technology | Industrials | Markets | Stocks