Chipotle Mexican Grill (CMG)  was getting pressured this morning in pre-market trading. Not from another food safety scare that has plagued the chain, but from a slump in their third-quarter numbers.

As a technical analyst I don't try to understand the fundamental news, but rather I want to see how securities react to the news. In the case of CMG it looks like the news is disappointing and traders and investors are selling.

In this daily chart of CMG, above, we can see the price action through Tuesday. What is missing from the chart is the trading before the opening with CMG trading around $388, just above the 52-week low of $384.77. Before today, CMG was in a sideways trading range for the past five months. Rallies were capped around the $440 level and dips below $400 to $390 found buying interest, but with CMG trading below $390 it puts a lot of recent longs underwater. The technical landscape coming into today's session was not positive.

In this chart you can see that prices are below the flat 50-day moving average line and below the declining 200-day moving average line. Now look at the movement of the On-Balance-Volume (OBV) line, which has worked lower the past two months signaling more aggressive selling despite the news of a major stake by a visible hedge fund manager. In the bottom panel is a 12-day momentum study and unfortunately there is no bullish divergence to suggest that the price decline is slowing.

In this weekly chart above, going back to late 2011, we can see the long and strong rally to around $750 from below $250 -- impressive. Unfortunately, prices are coming back down and are below the declining 40-week moving average line. The weekly OBV line peaked in early 2014 and suggests there was significant liquidation into the peak in 2015.

The trend-following Moving Average Convergence Divergence (MACD) oscillator has been in bearish territory since November 2015 and looks like it is narrowing to a new sell signal. The next possible support areas for CMG on this chart would be $350 and then $300 as a "round number." 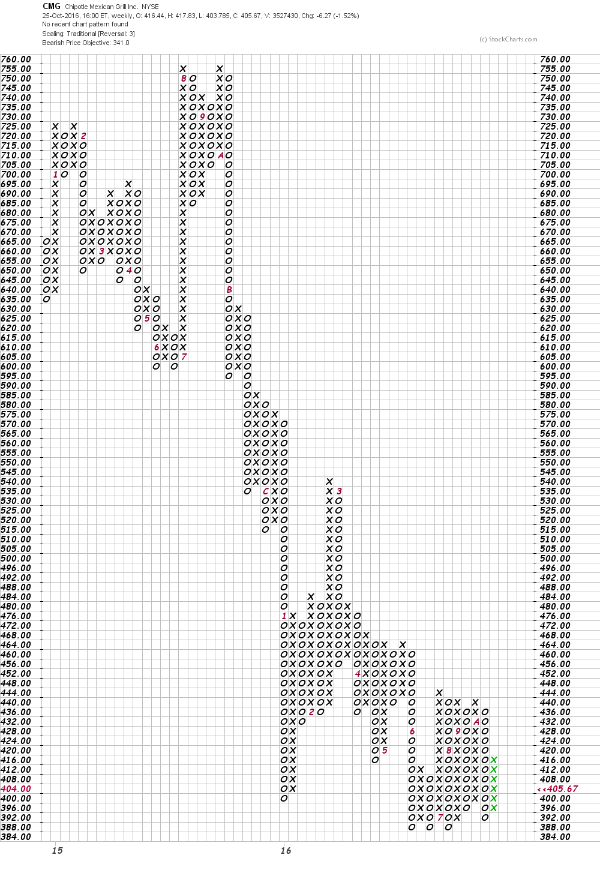 In this Point and Figure chart, above, we show the price reversals for CMG. Unlike a line chart that just shows the closing price or a bar chart that shows the high, low and close, the Point and Figure chart shows the intraday jiggles. In the case of CMG the moves are filtered by swings of $4 or more. When CMG begins to trade in the regular session we will see a line of 0s down to $388 and maybe lower. A breakdown on this chart gives us a price target or objective of $340 or so.

Get an email alert each time I write an article for Real Money. Click the "+Follow" next to my byline to this article.
TAGS: Investing | U.S. Equity | Consumer Staples | Markets | Consumer