Amazon.com Inc. (AMZN) has fallen sharply in recent days. The last time I wrote about AMZN was in late August.  I included a monthly candlestick chart with that analysis and wrote, "What did I say and what should you do? All I said was that after a very long rise in the price of AMZN I see some patterns that give me pause. I did not say sell. I did not say go short. I did not say write at-the-money calls. Just keep an open mind as we move into September." Now as we approach the end of October we can see that AMZN has fallen around $300 a share since the end of August. Let's check out the charts again this morning to see if it safe to go into the water again with Amazon, which is a holding of Jim Cramer's Action Alerts PLUS charitable trust.

In this daily bar chart of AMZN, below, we see some weakness in the indicators and no strong buy signals yet. To speed up the moving average signals I switched to exponential moving averages (EMA) this morning. AMZN is below the declining 50-day EMA and it tested the rising 200-day EMA on Wednesday. The daily On-Balance-Volume (OBV) line shows a rise from last October to early September and then it has declined. The rising OBV line is bullish, but the decline tells us that traders of AMZN are now more aggressive sellers. The 12-day price momentum study in the lower panel shows a bearish divergence from July to September as momentum slowed. Momentum has improved from its lowest readings this month, but I would not call it a bullish divergence just yet.

In this weekly bar chart of AMZN, below, we can see that prices are testing the 40-week EMA. The weekly OBV line shows a dip and the 12-week momentum study shows a bearish divergence from March to September.

In this monthly candlestick chart of AMZN, below, we have nine record highs (white candles) to August. We have a bearish hanging-man candle in September and confirmation in October. Candles do not give price targets, so we need to look at other charts.

In this Point and Figure chart of AMZN, below, the computer program is projecting a bearish price target around $1,470. 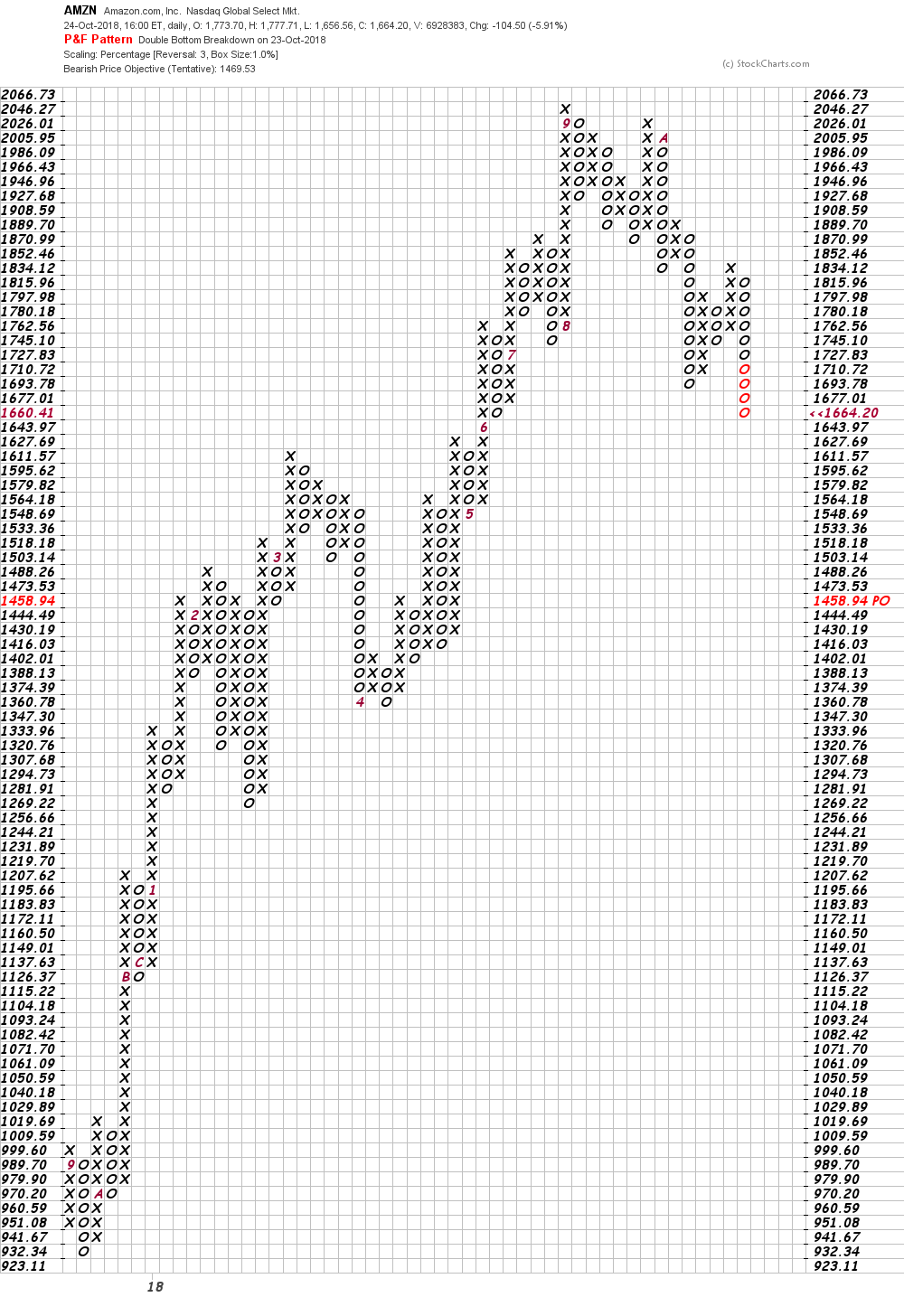 Bottom line strategy: The  major averages have opened higher on Thursday, and AMZN is up around 2% in early trading. To me this is not enough technical evidence to recommend a long position.

Get an email alert each time I write an article for Real Money. Click the "+Follow" next to my byline to this article.
TAGS: Investing | U.S. Equity | Technology | Consumer Discretionary | Entertainment | How-to | E-Commerce | Risk Management | Stocks