"Wealth can only be accumulated by the earnings of industry and the savings of frugality." -- President John Tyler

Huzzah!! Impressive quarterly earnings were put to the tape on Tuesday by some of America's bluest of blue-chip firms. Of particular note were the powerful numbers, coupled with powerful full-year guidance, which we saw from the likes of Caterpillar (CAT) and 3M (MMM) . The gains made by these stocks were not typical. The day was not a bad one, but due to the way that the Dow Jones Industrial Average is weighted by price, the levels that these stocks trade gave them more influence over direction on Wednesday than other names. This put the Dow well ahead of the broader markets for the day.

What do those two stocks tell us about the state of the marketplace? You can throw in General Motors (GM) and United Technologies (UTX) if you'd like, but I think CAT and MMM tell us so much more. Monetary policy is no longer all that predictable in the medium to long term, and looks like it could be a headwind rather than a tailwind if not handled well. Tax reform is a positive story. Some firms are even starting to mention it in their earnings calls. This had not happened before, and that in itself is cause for optimism regarding trend. That said, do not be surprised, when we get there, if there is something of a "sell the news" event, as investors have already "bought the rumor." The real story for the big U.S. industrials is global demand.

Take Caterpillar, one of my favorites. Am I long? No. The kid got himself long, and "shrewdly" took profits ahead of earnings. Gotta smile. Well, CAT saw sales in the Asia-Pacific region grow by a whopping 31%. Half of that growth came from China. One Belt, One Road? Another empty city? Who cares. China provided the planet's engine for growth during North America, and Europe's darkest financial moments, and they appear to be building again. 3M used to be known as Minnesota Mining and Manufacturing. Know what its famous brands are? Scotch-tape, Post-its, Nexcare. Know who's buying their stuff? The Chinese. Organic sales growth for this firm reached 23% in China, and a more pedestrian 3.6% here in the U.S.

You have probably noticed the performance of the Dow Jones Industrial Average versus the Russell 2000 over the past three months. We're talking a 9% gain versus 4.3%. I had been looking at this, as skepticism over successful tax reform as corporate tax reform would benefit smaller firms the most. Perhaps I read this incorrectly. Perhaps, the potential of tax reform is still the catalyst for the domestically based Russell 2000's gain over this timeframe, and the outperformance of the large industrials is simply a function of their collective exposure to a growing global marketplace in a cheap dollar environment. It's not like this economic trend was not already becoming obvious earlier in the year. It's just the magnitude of this demand. One word. Impressive.

Run for the Border

The U.S. 10-year note, which happens to be the most closely watched of the Department of the Treasury's line of debt products, has now made a clear run for the border. After the yield for this product scraped along 2.4% support for much of Tuesday's session, that level cracked. This morning, the 10-year is giving up more than 2.45%. I think you can call this a surge, as this yield is the highest that we have seen in the space since back in March, after the same product had twice found support at 2.6% in a three-month span following the election. A lot has been made of this 2.4% level from some of the most highly celebrated names in U.S. bond markets, namely Bill Gross, and Jeffrey Gundlach. Both have been tagged with the nickname "the bond king", and both have warned that the bull market for fixed income would face an inflection point as this level was crossed.

The catalyst? There are several. Global growth. Expectations for unbottled inflation. Speculation that growth in Europe could force the ECB to be more aggressive as they normalize policy than had been previously expected, and finally... the odds of John Taylor rising to one of the top two jobs at the Federal Reserve after several Republicans showed some informal support in his direction. Taylor, for those unaware, favors a rules-based approach toward monetary policy. He is thought of as more hawkish than the other two leading candidates for the top jobs, current Fed Chair Janet Yellen, and current Fed Governor Jerome Powell. As for equities, financials, particularly the banks, are now enjoying their day in the sun.

Ever hear of Peter Tchir, current head of Macro Strategies at Academy Securities? Usually the smartest person in the room? In my world, he's the "bond king". Peter has been looking for yields on the U.S. 10-year approaching 2.6% since before the 2.4% level broke. By the way, Peter also writes for TheStreet.

Chart of the Day: The Nasdaq Composite

Rotation, anyone? We all know that the Nasdaq Composite has run 22% year to date; however, the hard-charging, tech-laden index has slowed its trajectory of late. Up top, we spoke of the 9% run of the Dow Industrials over the past three months, as well as the 4.3% performance turned in by the small-cap index. The Nasdaq over that time? Less than 3%.

We've heard a lot lately on the rotation out of FANG. Should you be out of those stocks? With the exception of Action Alerts PLUS charity portfolio holding Alphabet (GOOGL) , where I stayed long, and Netflix (NFLX) , where I just jumped back in small, I have avoided these names myself for more than a month. Maybe I'm biased. Everyone knows that I am a Walmart (WMT) fan. What do I think of the Nasdaq going forward? The chart below is very busy. It needs to be. Print it out, and we'll discuss. 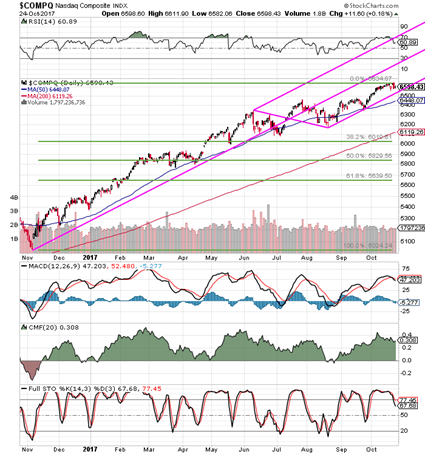 First off, keep in mind that tech is the horse that I rode in on, and I remain long an absolute bevy of semiconductor-type names. I think that group will ultimately prove to be the long-term support for this index when it gets heavy.

The Pitchfork model clearly shows that a certain level of support did crack this summer. The lower tine is now support, while the central tine, formerly support, has become resistance. This suggests to me that on a "sell the news" event regarding tax reform, profit taking could easily take the index below current support. Should that spot crack, the crowd looking for a 38.2% Fibonacci retracement would be watching for much lower levels, barely above 6000 on the index. Too far? There is a 330-point gap between the 50-day and 200-day simple moving averages (SMAs).

Would I abandon my longs based on this obvious danger to the index? No; 10-year trends that hurdle changing fundamentals with only minor bends do not die that easily. Though there could be a "sell the news"-type event, the index is likely to regain its footing in the event of any shakeout. As we have often seen, the "buy-the-dip" crowd tends to show up. Tighter monetary policy does become a headwind, I believe, as the yield on the 10-year approached 3%. My thought is that the index could hit resistance around 6800, and if that level can be held, 7100 would then become a reachable target over a six-month timeframe.

The indicators for the short-term are mixed. The Chaikin Money Flow is still flying the flag of strong institutional investment. However, both Relative Strength and the Full Stochastic Oscillator indicate that the index is now coming out of an overbought condition. The moving average convergence divergence (MACD), which is one of my very favorite tools, shows a bearish crossover, though at elevated levels.

What Am I Trying to Tell You?

Simply put, I am trying to indicate that short-term, the index will continue to struggle somewhat. Do you want to be long this index, or its components? Yes, I think the prudent investor would be crazy to abandon such a consistent performance. That said, if you're out, I think there is a better point of entry ahead. If you're long, there will be a better spot to add. If you're short, you are going to get your chance. If you are the kind that checks your portfolio once in a while, and does not actively manage your book, you can go back to the box scores. I think you'll be fine. That's not a promise.