Broadcom Ltd. (AVGO) has nearly tripled in the past three years. AVGO is certainly one of the stocks you should have bought back in 2011-2013 when it was in a consolidation pattern at $30 per share. Would have, could have, should have. We cannot go back in time for a do-over so we just have to do the best we can in real time.

We looked at the charts and indicators for Action Alerts PLUS holding Broadcom five weeks ago, and we concluded that "Has AVGO made a major top pattern? No. Can AVGO weaken to $240 and then $230? Yes, it looks like we are heading lower in the short run." A fresh look at the charts of AVGO wouldn't hurt now.

In this daily bar (high, low, close) chart of AVGO, above, we can see that over the past five weeks or so the slope of the 50-day moving average line has turned negative. The slower-to-react 200-day moving average line is still rising. While the slope is positive the line is coming up to the price action because prices have traded sideways for the past five months. The volume of trading is interesting in that there was a volume surge in early June and some smaller surges in August and September but prices have weakened.

The daily On-Balance-Volume (OBV) line peaked in early June and despite some volume surges it has declined. A weakening OBV line is a sign that sellers are more aggressive with heavier volume being seen on days when the stock closes lower. The trend-following Moving Average Convergence Divergence (MACD) oscillator gave a cover shorts buy signal in early October but has yet to move above the zero line for an outright go long signal.

In this weekly bar chart of AVGO, above, we can see the uptrend going back for three years. The rising 40-week moving average line has done a good job in defining the uptrend.

The weekly OBV line peaked nearly eight months ago and has not confirmed the price strength similar to the daily OBV line. The weekly MACD oscillator has been in a bearish mode since late June. 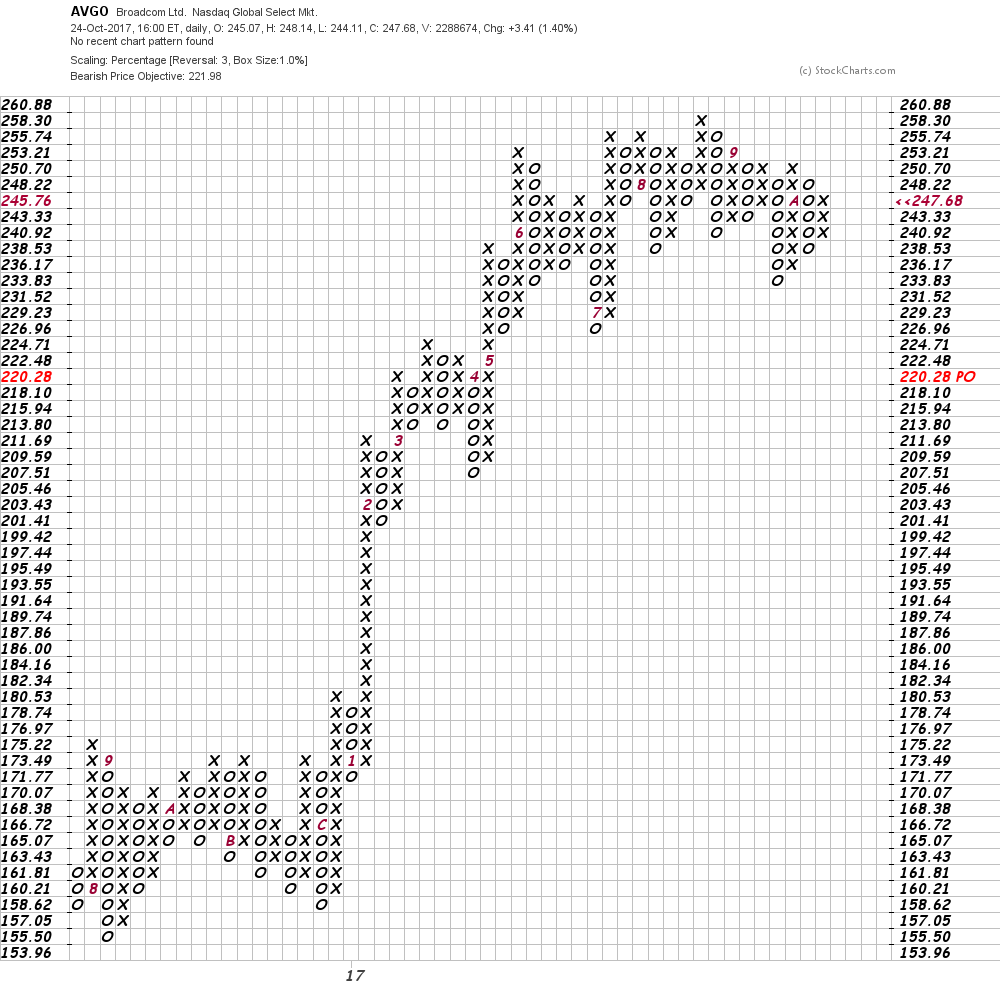 In this Point and Figure chart of AVGO, above, we can see that prices have made a number of rally failures since June (look for the "6" on the chart). A decline to $236.17 will be a sign of weakness and a decline to $231.52 could open the way for a deeper decline to the $222 area.

Bottom line: A decline to the $222 area, if it were to happen, would break the rising 40-week moving average line. Breaks of the 40-week average have happened before (see the weekly chart above) and it has not broken the back of this bull, but the bull is older than it was back in 2015. So what are we saying? New longs should be cautious. A decline to $236 could be strike one and a close below $230 could be strike two. Don't take your eye off the ball.

Broadcom is a holding in Jim Cramer's Action Alerts PLUS Charitable Trust Portfolio. Want to be alerted before Cramer buys or sells AVGO? Learn more now.