We reviewed the charts and indicators of KLA Tencor (KLAC)  in early August, and gave this advice, "KLAC made have put in a tradeable low, but I would wait to buy the first down day and then use a sell stop at $88.25." With almost three months of new price history to look at, we can see that going long KLAC back in August was well timed.

What should we be doing now that prices are back up to their June zenith? Could this be a double-top pattern in the making?

In this daily bar chart of KLAC, below, we can see that prices made a lopsided double-bottom pattern in July and August followed by a rally back to the highs for the year. KLAC is above the rising 50-day moving average line, as well as the rising 200-day line. Prices are currently "playing chicken" with the June peak near $110.

The On-Balance-Volume (OBV) line has been rising over the past twelve months and hardly declined in June through August. The trend-following Moving Average Convergence Divergence (MACD) oscillator has crossed to the downside from above the zero line. This signal above the zero line is considered a take-profits sell signal and not an outright sell or a go-short signal.

This weekly bar chart of KLAC is clearly bullish. Prices are above the rising 40-week moving average line. The weekly OBV line has been going up since late 2015 and the weekly MACD oscillator has signaled a cover-shorts buy signal last month. 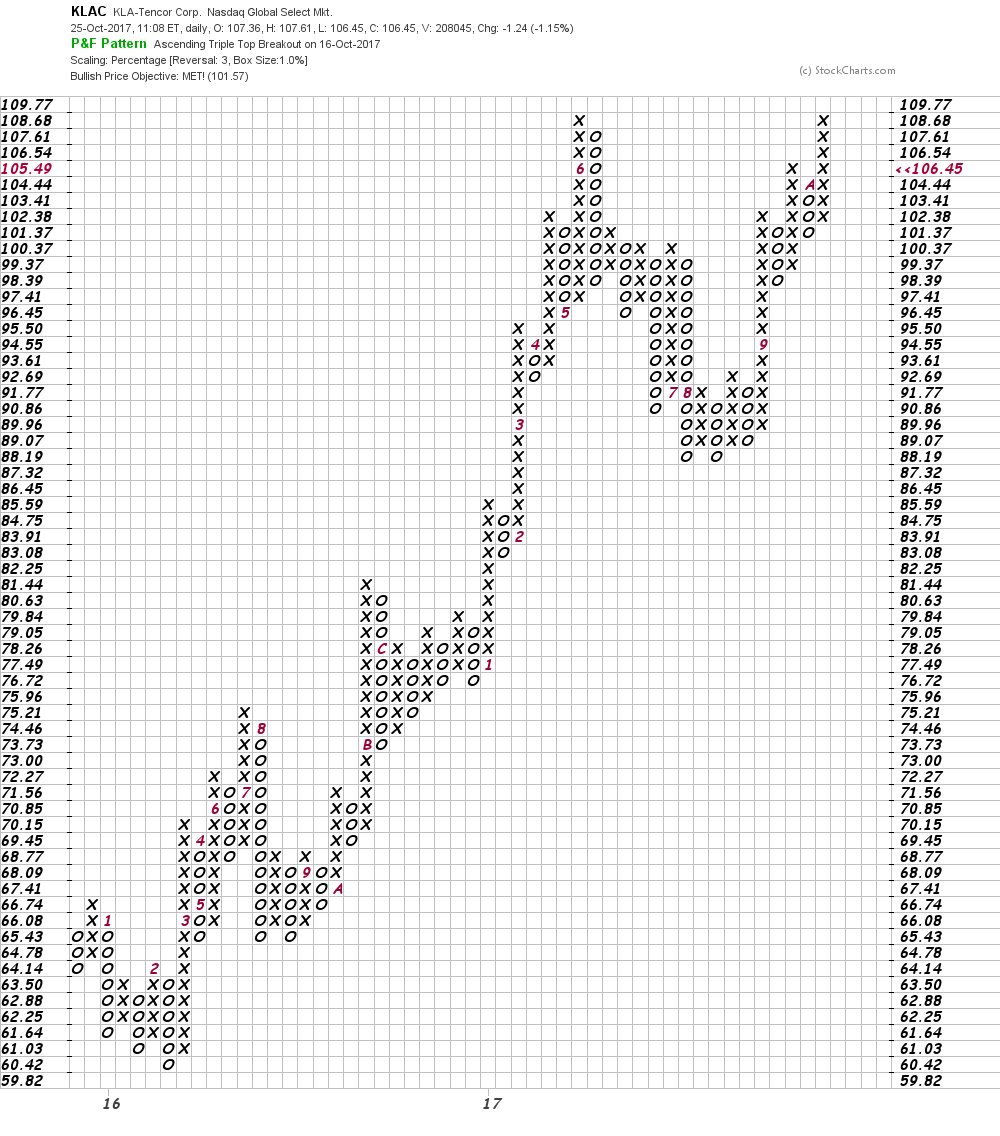 This Point and Figure chart of KLAC, above, shows the potential double-top formation. A trade up to $109.77 will be a minor breakout. I say it is minor in that you can sometimes see prices go one or two percent above the prior high as they make a double top. Sometimes prices stop one or two percent below the prior high. This chart also shows that a $101.57 price target was reached.

Bottom line: KLAC will need to decline further in the short run before I will be certain that this is a double-top formation. A trade above $112.20 (2% higher) is needed to negate the double top idea. Because the indicators have not deteriorated at a recent second peak I favor the upside.

Get an email alert each time I write an article for Real Money. Click the "+Follow" next to my byline to this article.
TAGS: Investing | U.S. Equity | Industrials | Technology | Markets | Stocks