One of the themes for most of 2017 has been a weak U.S. dollar. After a post-election rally, the greenback reached multiyear highs, finally peaking in January. Since then, the buck has been on a mostly downward trajectory.

However, the dollar's fortunes have recently changed. The U.S. Dollar Index finally showed some strength in September after a series of consecutive losing months and as of late October was retaining that strength. 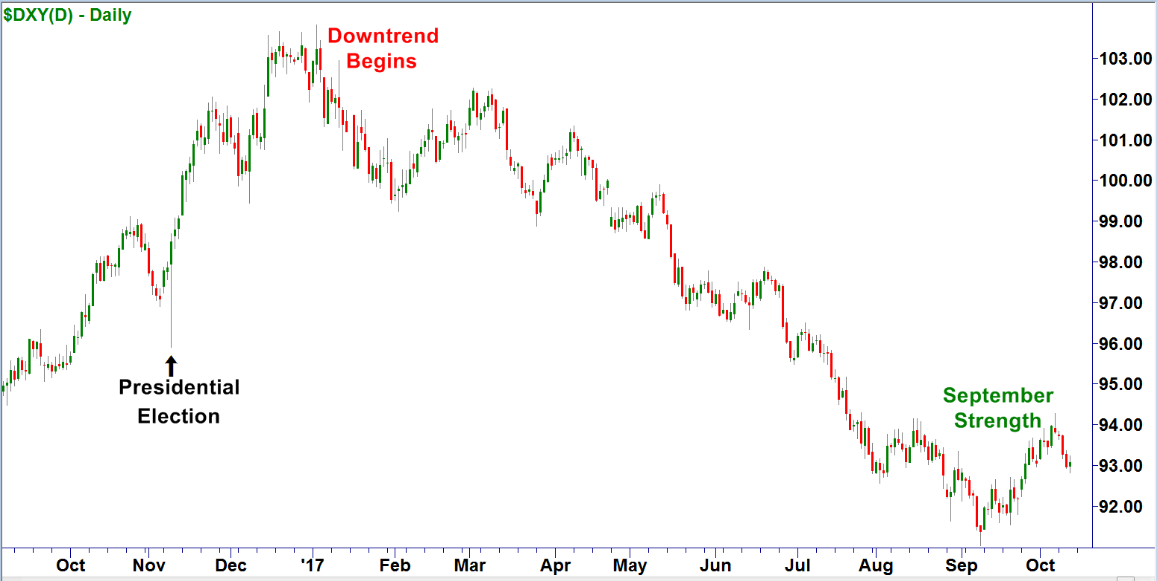 If the dollar does continue to strengthen, which companies stand to benefit?

Here's a rule of thumb: When the dollar is weak, look outward and invest in companies that do a significant amount of business outside the U.S. Think of some of this year's big winners, like Alphabet (GOOGL) , 3M (MMM) and McDonald's (MCD) . Those companies have significant overseas operations.

However, when the dollar is strong, look inward and buy companies that do the lion's share of their business within the U.S.

A good example would be regional banks. Unlike their multinational counterparts, regional banks have little to no international exposure, and therefore are insulated from the negative effects of a strong dollar. Names like SunTrust Banks (STI) , BB&T (BBT) and Capital One (COF) fall into this category.

What about restaurants? You can find a McDonald's almost anywhere in the world, and that makes it a great stock to own when the dollar is weak. When the dollar is strong, look for chains that have little to no overseas exposure, like Texas Roadhouse (TXRH) , Red Robin Gourmet Burgers  (RRGB) and Sonic (SONC) .

Who else benefits from a strong dollar? We can invest in foreign-based companies that do a significant amount of business inside the U.S. Some companies that fit this description include consumer-products giants Unilever (UL) and Nestle (NSRGF) and commercial airline manufacturer Airbus (EADSY) .

In Washington, proposed changes to corporate tax laws could have a side effect of making the dollar even stronger. White House economic advisor Gary Cohn is floating a proposed 10% tax on funds held overseas by U.S. companies.

Companies like Apple (AAPL) , Alphabet, Cisco Systems (CSCO) and others hold an estimated $2.6 trillion overseas. If the tax rate on funds repatriated to the U.S. is temporarily cut to 10%, it could unleash a significant flow of capital, which in turn would cause an upward surge in the dollar.

The bottom line: 2017 will likely be remembered as the year of the weak dollar, but 2018 could be an entirely different story. Now might be a good time to formulate your game plan.

(This commentary originally appeared on Real Money Pro at 7:00 a.m. on Oct. 13 and was updated on Oct. 25. Click here to learn about this dynamic market information service for active traders.)

Apple, Alphabet is a holding in Jim Cramer's Action Alerts PLUS Charitable Trust Portfolio. Want to be alerted before Cramer buys or sells AAPL and GOOGL? Learn more now.

Get an email alert each time I write an article for Real Money. Click the "+Follow" next to my byline to this article.
TAGS: Currencies | Markets | Investing | FOREX | How-to

Fundamentals? It Has All Been About Central Bank Liquidity!

All eyes will be on the Fed this Wednesday to see if this 'weakness' will or can cause them to reverse their policy.

The Dollar's Parabolic Rise Is Hard to Ignore

This is a massive move in the world of currencies.

I'm thinking this may be a time when the old K.I.S.S. principle comes into play.

These products offer traders the ability to speculate, or hedge interest-rate risk, in a relatively conservative and comfortable manner.