The normally sleepy Dow Jones Industrial Average has gone parabolic in October, rising over 5% with a week still left to trade. Five percentage points may not sound like much, but when we are talking about a concentrated index that is up a little less than 12% for the last six months, picking up half its gains in a single month is pretty impressive.

This basically matches the big move higher in February, after which we traded sideways to lower for the next three months. So if this pattern repeats for the next three months, what pieces of this sleepy index might outperform the rest? I have an eye on one name that has already outperformed, one that has stayed in line and one where we might have to do some nose-holding to even consider a position.

We'll start with the best-performing name in the trio: Visa (V) . We all know the name and the core of what Visa does to earn its keep. Simply put, Visa is best known for its payment processing of credit and debit cards. The company recently raised its dividend and has been implementing a $5 billion buyback. While the dividend yield is only 0.7%, when you combine it with a buyback totaling 2.5% of its market cap, this is a nice bonus on a consistent performer. Not only consistent but big, as sales and earnings are projected to grow in the mid- to high teens for the next three to five years. 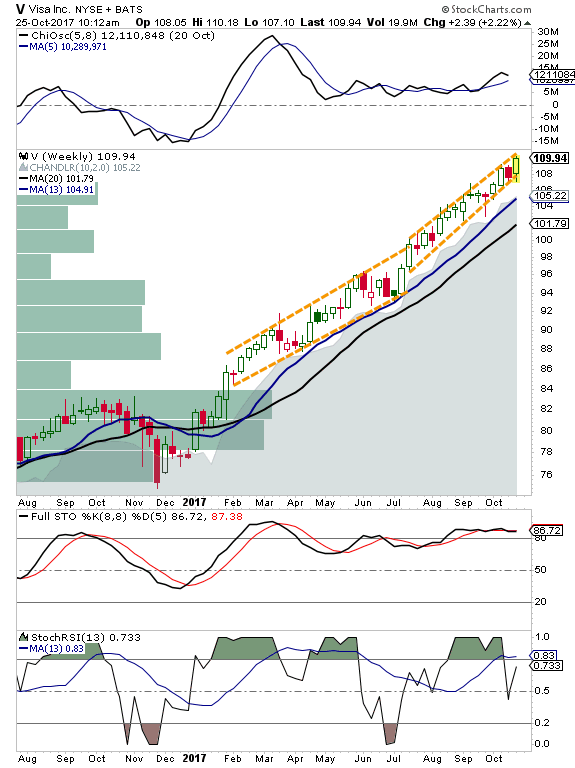 Technically, the lower-left-to-upper-right movement of the stock is what dreams are made of in terms of price action. Shares of Visa have not breached the 13-week simple moving average (SMA) since the second week of 2017. I would target aggressively buying shares on any sniff of this 13-week SMA, currently $104-$105, and target a climb to $120-$125 in 2018. Visa does appear to be slightly overbought in a technical sense, but after the company reported earnings per share a nickel ahead of estimates this morning on $4.9 billion in revenue, my only fear is it won't give us a chance at entry. The likely best strategy is to take a starter position here and sell out-of-the-money calls against shares while looking to fill the position on the 13-week SMA.

This isn't simply a story about credit card processing, and that's what propels Visa to the top of the list. The company recently rolled out VISA ID Intelligence, making a move toward the unique payment systems required by Internet of Things (IoT) devices. These devices like rings or watches (wearables) will require security geared more toward biometrics such as facial scans, voice recognition, fingerprints and other non-password measures. Advanced cybersecurity measures will help accelerate IoT into everyday use, and a company with the most secure payment processing could find itself in as many as 20 billion devices by 2020. Expect aggressive competition in the space, but Visa is clearly a player that should boost the top and bottom line for years to come.

From best to worst brings us to Nike (NKE) . Shares are trading lower as the company prepares for an investor day today. Investors will be listening closely as the company needs to address current market concerns like the growing competition from Adidas and how management is balancing the creation of product scarcity while still achieving sales goals. The new NBA sponsorship should allow for strong marketing directly to the consumer Nike wants to chase the reinvented scarce products. Feels a bit ironic discussing the idea of driving demand behind a product line like Nike Air Jordan only to make the product less widely available, but that's the core thinking. 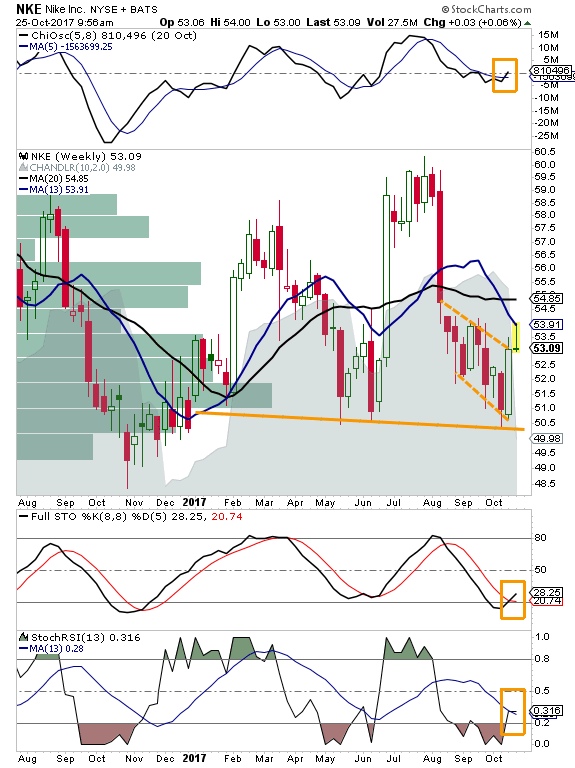 International sales should drive Nike moving forward. It's been the strongest story the company has to offer. From a contrarian standpoint, there is overwhelming negativity among analysts and investors. Most are advising a wait-and-see approach. If Nike can smooth distribution issues in North America, maintain a strong growth trend internationally and navigate both online competition and industry trends, the upside could be huge.

There's no denying Nike's weekly chart is ugly. Shares are under the 13-week and 20-week SMA, which is a concern. If the stock closes under $50, all bets are off and I would actually look for a test of sub-$45 as this big bearish head-and-shoulders pattern would take hold. That being said, shares are breaking higher from what appeared to be a bearish flag. We have bullish crossovers from bearish territory in the Full Stochastics, StochRSI and Chaikan Oscillator all occurring simultaneously. That's happened twice before over the past year (November 2018 and June 2017) with both times producing big gains. Nike comes in at No. 2 on my list.

Completing the list is Home Depot (HD) . Shares have been buoyed by the catastrophic hurricanes, Irma and Harvey, but likely aren't done rising. Not only did we have two Category 4 hurricanes make landfall in the continental U.S. in the same year, but they were only days apart. Home Depot shares, despite a solid year, have been depressed by Amazon (AMZN) concerns. One thing the hurricanes taught us is folks aren't going to scramble to get online to order stuff after a hurricane, but they will hit up stores like Home Depot and Lowe's (LOW) . Unfortunately, this won't be the last of the natural disasters. Harvey and Irma could increase Home Depot revenues in 2017 and 2018 by a billion dollars, if not a little more. The company already guided sales and comps to growth factors of 5.3% and 5.5%, but these may prove to be conservative. 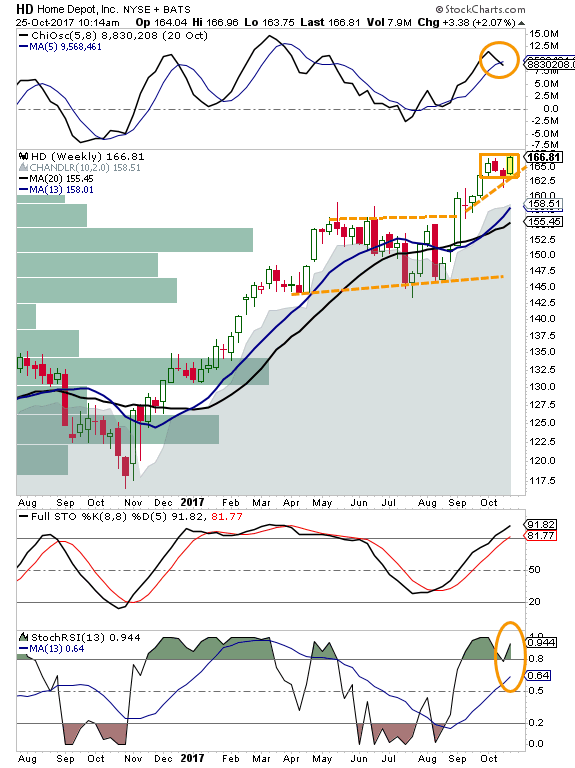 If there is an area of opportunity that hasn't been discussed, it's in home automation. While Home Depot won't be viewed as a player for a name like Alarm.com (ALRM) or Control4 Corp. (CTRL) , it should absolutely explore partnerships with companies like these that are leading the smart-home revolution. Home Depot offers plenty of products that can tie in with the overall implementation of a total smart-home system. If we see any movement into the space, investors should consider becoming a bit more aggressive on the long side.

While shares enjoyed a strong post-hurricane September run, we've moved into an area of consolidation. This is a positive development and I'm looking for shares to trade in the $161 to $167.50 range, a rest to reset. Investors can target two entry points: a test of support around $162.50 or a breakout over $167.50. The initial upside is $177.50, but I believe Home Depot should trade $200 in the next 12 to 18 months.

Get an email alert each time I write an article for Real Money. Click the "+Follow" next to my byline to this article.
TAGS: Investing | U.S. Equity | Basic Materials | Consumer Discretionary | Consumer | Markets | Stocks