During Tuesday night's Mad Money program a caller asked Jim Cramer about the airlines given the holiday season is around the corner and oil prices are pulling back. Cramer said now's the perfect time to get into the airline stocks and Southwest Airlines Co. (LUV) remains his fav. Let's check the charts and indicators before filing a flight plan.

In the daily bar chart of LUV, below, we can see a high in December/January and a lower high in September. The June-September rebound stopped in resistance from December/January and has turned lower. This month LUV failed at the underside of the cresting 50-day moving average line and today we are likely to see LUV close below the declining 200-day line.

The daily On-Balance-Volume (OBV) line shows a decline from December to June, which is a sign of more aggressive selling. Another decline in the OBV line looks like it began in September.

The trend-following Moving Average Convergence Divergence (MACD) oscillator moved below the zero line this month for an outright sell signal.

In this weekly bar chart of LUV, below, we can see a large potential top pattern playing out from early 2017. Prices have been crossing above and below the 40-week moving average line, which has been weakening this year.

The weekly OBV line shows a similar topping pattern. The weekly MACD oscillator is poised to cross to the downside for a take profits sell signal.

In this Point and Figure chart of LUV, below, we can see a downside price projection of $52.69. 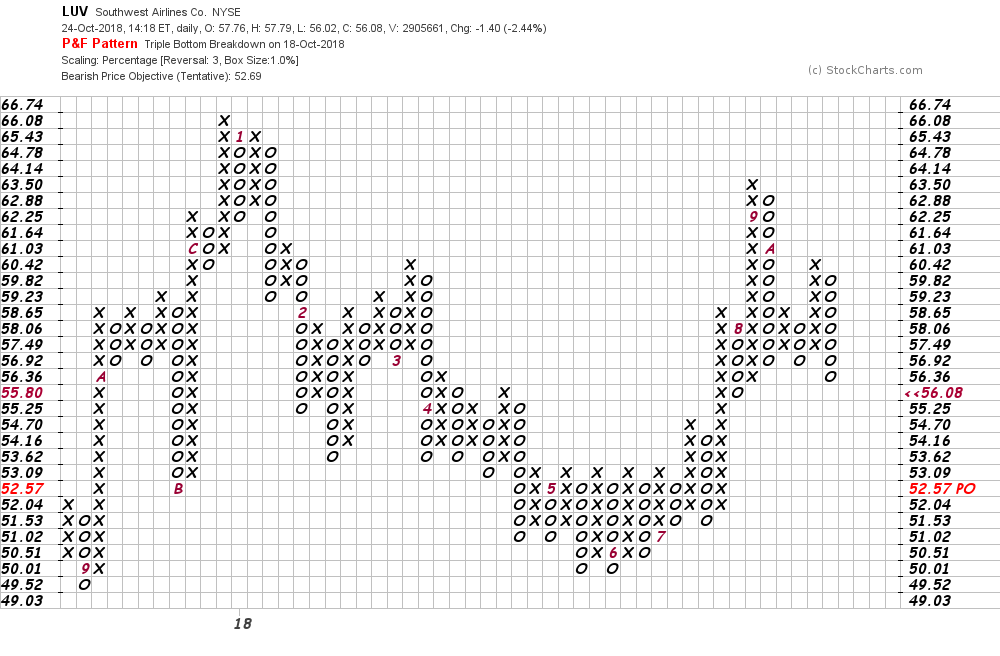 Bottom-line strategy: With a downside Point and Figure target of $52.69 we could see LUV retest the nearby support zone in the $54-$50 area from May-July.

Since 2010 Signature Bank grew rapidly across all major business metrics and renewed growth is expected in 2021. Here's how to play it.

Psst: Can You Hear that Bitcoin Chatter? Then I've Got a Chart for You

After a reader asked about the cryptocurrency, I took a look, and I like what I saw.

Jim Cramer: Buyers, It's Time to Look in the Mirror

Blame the Fed? No. I'm reserving my wrath for the clueless buyers who appear to have taken a permanent intellectual summer vacation.