What was the most stunning event of Tuesday? Jim Cramer said it wasn't the Dow Jones Industrial Average's 500-point reversal, it was a 7.2% jump in shares of PulteGroup Inc. (PHM) .

Does this mean the housing sector might finally be finding a bottom? Don't count on it, said Cramer on Tuesday night's Mad Money program on CNBC. Let's visit with the charts of PHM to check out the trends and patterns.

In the daily bar chart of PHM, below, we can see that the stock price peaked back in January. Prices made a quick downside adjustment into February and then slowly rolled over until August. In August the sellers became more aggressive and PHM quickly dropped to around $21.

Back in June the 50-day moving average line moved below the slower-to-react 200-day line for a "dead cross" sell signal. The slope of the 200-day line turned negative in August and both the 50- and 200-day averages remain negative.

The daily On-Balance-Volume (OBV) line has been weakening since June/July and tells me that sellers of PHM have been more aggressive. The trend-following Moving Average Convergence Divergence (MACD) oscillator moved below the zero line in late July for an outright sell signal. This oscillator may cross to a cover shorts buy signal but it is a long way from an outright go long signal.

In this weekly bar chart of PHM, below, we can see a bearish alignment of our indicators. Prices are below the 40-week moving average line and its slope has been negative for the past three months.

The weekly OBV line shows a peak back in December 2017 so we have seen months of liquidation or selling. The MACD oscillator went negative in July and is not narrowing.

In this Point and Figure chart of PHM, below, we can see the big decline from the distribution pattern. Prices have met a downside price target but with no nearby support and no new basing, further declines are likely, in my opinion. 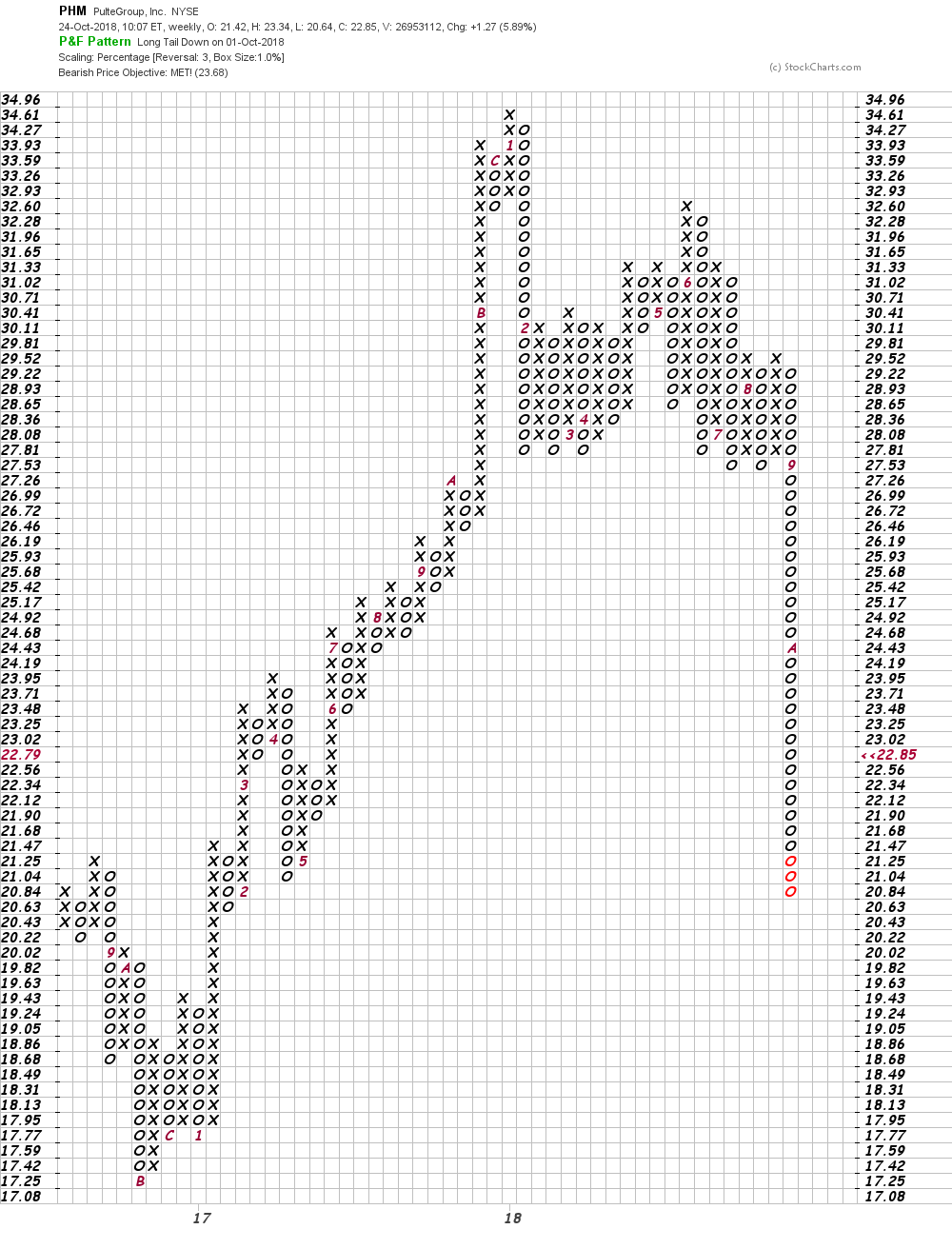 Bottom-line strategy: PHM made a low Tuesday. This probably is not "the low" and we may not even have the start of a bottom. (When housing stocks peaked in 2005 it took three years until they started to bottom. The circumstances are not the same today but I would just caution you on being early.)

A Penny for Your Value Investing Thoughts? How About 20 Tons of Them

A huge truckload of copper-rich pennies offers a lesson in the dilemma of locked-up value.

You've Got Volatility 'Covered' With This Strategy

This simple option strategy, which I continue to use with small-cap biotechs, is one of the easiest and cheapest risk mitigation approaches an individual can take.

Mattel Is Doing Swell, So Add to It on Fresh Highs

It appears buyers of the toymaker's stock have been more aggressive of late based on its charts.