The eurozone put their second-quarter GDP growth data to the tape in early September. The engine had slowed to yearly growth of 2.1%, which was down sequentially from 2.5%, and 2.7% over successive quarters. Right or wrong, Italy defies fiscal rules set forth by the EU that, at the very least, deny national sovereignty. In exchange for the surrender of national independence, comes the support of the European Central Bank. Thus, in less than a month's time, what the Italian 10-year pays has spiked about three quarters of a full percent. Italian equities have underperformed already stumbling European markets over that time, as well.

You may have seen European Flash PMIs this morning. Germany, France, the eurozone in aggregate. Three big swings. Three big misses. Somehow, Mario Draghi is supposed to sound hawkish tomorrow morning. Somehow, the ECB is supposed to end its version of "quantitative easing" by this December, and start talking about an unwind similar to what the Fed is doing with its balance sheet -- with eurozone consumer-level inflation cruising at a "robust" 0.9%. Yeah, you may have to wait for a bit before you actually see a rate hike, if you ever do see one.

Do we get started on China? Slowest rate of headline growth in nine years. Slowest pace of growth for industrial production in two and a half years. More of a willingness to simply pour more stimulus on that economy than even respond to U.S. concerns that have forced a confrontation on trade, unless something interesting changes in Buenos Aires. The stage is set for a positive breakthrough as far as that is concerned -- either that, or a new Cold War. We will adapt to either outcome.

Slower global economic growth and a widening divergence in monetary policy have forced higher valuations for the U.S. dollar. This makes it even tougher for large U.S.-based multinationals to sell, while dealing with the dual impact of rising material costs and the likelihood of a further slowing of demand across international borders.

You might think Tuesday to be an odd time to initiate a long position in a name directly negatively impacted by the conditions just outlined, but that's exactly what I did with Caterpillar (CAT) . Why? Well for one thing, the shares are broken, down 32% from the 2018 high, and trading at prices not seen for over a year's time. Corporate execution is obviously there for this name, as they beat top-and-bottom-line expectations handily on more than acceptable revenue growth.

The firm stayed tough on 2018 guidance. The fact that it did not increase guidance was taken poorly. I see it a bit differently in this much tougher environment. Of course, margin pressures as the trade war with China develops, will be a concern for this stock. Yet, on the call, CEO Jim Umpleby sees normal demand from that base over the rest of the year and into 2019. At least some of all of this negative sentiment has to be priced in at this point. Oh, and by the way, Umpleby has committed to repurchasing another $750 million worth of equity over the fourth quarter, and maybe more if the shares appear to be undervalued. If a bell didn't go off there, gang... On top of that, they'll pay you 2.7% just to own the shares, which really is not bad at all if Umpleby is really going to be in the next foxhole, facing in the same direction.

The bottom line is that I have barely gotten my feet wet. Remember what I have taught you about incremental entry and net basis management. These tools are what gives the sentient investor an edge. This bet is simply a hedge against the ability of global central bankers to accomplish their stated missions.

I truly hope the shares come in as headlines worsen, because I intend to scale this purchase in for a while, and build a healthy core position. I could not do that 25% higher. Do I fear being wrong? No. (I understand that I am not normal.) Fear is for the wicked. The wicked shall be trampled. I know how to drive a forklift. I know how to lug 80 pound bags of cement. I store plenty of potable water. I'll be just fine. How about you?

I might also call this segment "Why I bought more Micron (MU) at Tuesday's lows, and not Nvidia (NVDA) ." Let's be clear, I am long both stocks. Where Nvidia is concerned, i am down to 10% of my original position size -- and will not reduce further, even if the stock goes to zero. At 27x forward-looking earnings in an industry priced at 12x to 13x, I can wait before I need to rebuild that position. For those that do something else for a living, UBS analyst Timothy Arcuri cut his price target for NVDA Tuesday, and seems less than enthusiastic on the future of gaming into early calendar year 2019. We'll see. Jensen Huang has a way of coming out on top.

Memory chip maker Micron (MU) is a different story for me. Yes, these kinds of (memory) chips trade more like commodities than anything else. Susquehanna (not the hat company) Financial downgraded MU Tuesday, and obliterated its price target. The $37 level has been my downside target all along for this name. When the shares kissed that level Tuesday before they rebounded, I was there. Susquehanna cites weakened demand for DRAM type chips (super important for MU, more so than for a firm like Western Digital (WDC) , which is more reliant upon NAND).

I will buy more should the stock make another attempt at cracking this level. Yes, the shares trade at just above 3x forward-looking earnings. I think we already know that something is terribly wrong here. My target price is $55, but I will take something off at $45 given the chance. Hey, Sanjay Mehrotra has already guided lower on fiscal first-quarter earnings and margins due to both demand and trade issues. What else? Yeah, Mehrotra is also buying the shares next to you (in accelerated fashion) while committing $100 million to start-ups involved in artificial intelligence. Doesn't sound like much of a surrender. No, not at all.

Mama said that there would be days like Tuesday. If I recall correctly, she never said a thing about months, though. The fun and games of earnings season continues on Wednesday. Yeah, I have a few logs in the fire. One of those logs reports tonight -- Microsoft.

What do we already know about Microsoft coming into today? Well, we know that the firm has moved its focus away from the legacy software business lines, such as the Windows operating system. We know that its new focus has been on the cloud and artificial intelligence. I would expect strong results for both the "Azure" cloud and public cloud lines as I would like to see MSFT further entrenched as number two in this space behind Action Alerts Plus holding Amazon (AMZN) . That firm reports tomorrow, by the way. Don't forget that Microsoft is expanding the firm's Azure service for government and is still very much alive in the pursuit of the Pentagon's JEDI project, potentially worth $10 billion.

Also important will be anything said tonight regarding the firm's recently announced decisions to invest more heavily in the Internet of Things and edge computing. Other items also of interest could be the future of gaming, and the firm's decision to tie CEO Satya Nadella's compensation to the performance of the job-seeking and business networking social media site, LinkedIn. I come into tonight's report long the shares.

I only show you this two and a half year chart to illustrate just how long the 50-day SMA had acted as support when tested for MSFT. That is, until a couple of weeks ago. That line suddenly looks like mild resistance. Nerdy? Yes. Interesting? Yes. 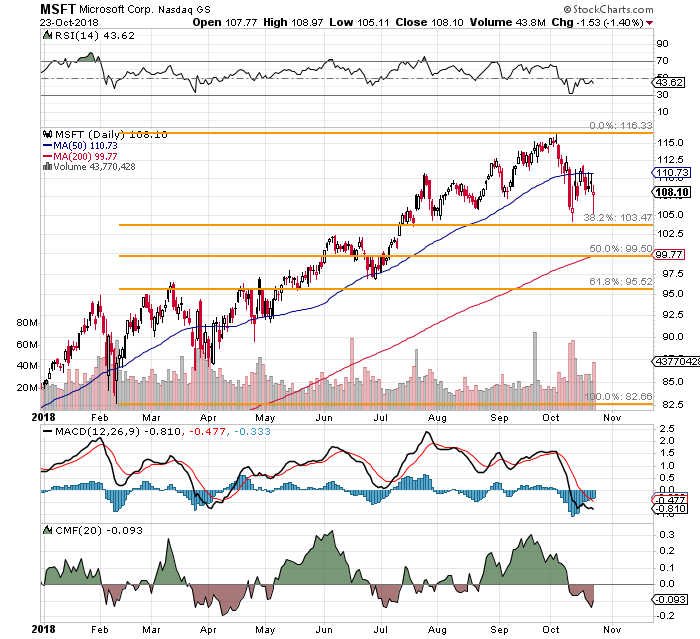 Let's get back to trading this thing. Relative Strength is somewhat neutral coming into tonight's numbers. The daily Moving Average Convergence Divergence is on the ugly side, but appears close to forming a positive-looking cross-over. Now look at the Fibonacci model that I have laid out for you, stretching from the February low through the present. See that double bottom that has formed almost precisely at the 38.2% retracement level? That's still where support lives. I intend to add to my long close to that spot.

Last night, one October 26 $108 Straddle would have cost you $5.37, or 537 bucks. (For the new people, a straddle is a simple options strategy consisting of the purchase (or sale) of a like number of calls and puts bearing the same strike price with the same expiration date. This is a direction neutral play on volatility, where the underlying share price must move more than the combined premium paid in order for such a purchase to be profitable.)

This information implies to me expectations of a 4.9% move in the shares during tonight's pajama session. This would be a larger-than-usual move for not only this stock, but for the broader equity market, as well. Now, at least you know where the options market thinks you can buy these and where you can sell them. Opportunity knocks. It always does.

Get an email alert each time I write an article for Real Money. Click the "+Follow" next to my byline to this article.
TAGS: Investing | Global Equity | Technology | Economic Data | Earnings | Economy | Newsletter | Politics