"Being a Navy SEAL and sniper taught me all about risk management. Take away all the risk variables under your control and reduce it to an acceptable level. The same fundamentals apply in business." -- Brandon Tyler Webb

A Little Off the Top

After last week's string of record finishes across the broad equity indices, I don't think anyone could be too surprised that after both trader and algorithms smelt a little morning weakness, profits were taken in what turned out to be an uglier afternoon than folks who stepped away from the markets might think. The weakest among those indices happened to be the Russell 2000, also known as the small-cap index. The underperformance of the small-caps versus the broader marketplace actually began late last week, which could indicate, in my book, some investor skepticism over successful tax reform.

For those who may just be getting involved, on average, small-cap firms pay very close to the standard corporate tax rate of 35%, whereas larger firms are better at finding ways to reduce their effective tax rates. Therefore, smaller firms are exactly the kind of firms that stand to benefit the most from any headline reduction in this space. On top of that, watch the U.S. 10-year note this morning, gang. Yields for that product are now flirting with 2.4%. Bill Gross kind of warned us about this neighborhood.

Leading the charge to the downside in Monday's trade was Action Alerts PLUS charity portfolio holding General Electric (GE) . This stock appeared to be given a one-day stay of execution on the back of that stellar performance by CEO John Flannery in the wake of those disappointing quarterly earnings. Flannery was forthright, and used the term "horrible" quite often throughout his televised appearance. I like Flannery. I do think that he's the hard-charging, fire-eating, butt kicker that this firm desperately needs to have at the top following the way the firm had been run for so long.

What is a small investor to do? I am hardly one to give advice here. I jumped in a bit early on this name. I was so excited when I learned that Jeffrey Immelt was leaving, and that Warren Buffett had exited his position, that I felt the stock was cheap, with one of the largest possible sellers removed from the price discovery mechanism.

Well, it turns out that there really is not enough cash flow. Oopsies. Not enough to break the firm up. Not enough to properly support the dividend in its current form. Hmm. The stock was not really cheap at all. In fact, the stock was, and is expensive. (New rule: You're not smarter than Warren Buffett). So, now I'm wearing a long position running at about 40% of what I originally intended to get long, at an average price almost a buck and a half higher than the last sale.

I am going to go out on a limb here and imagine that I'm not the only kid in the neighborhood that has ever had to walk down a tough block, so I'm going to tell you what I am going to do about it. You can make your own decisions. Keep in mind that the firm will let us know more about where it thinks it is are headed next month.

The first thing I will do is decide where I feel that I have made a mistake, and that the investment is not worth it, especially if the 4% dividend yield takes a hit. For me, that spot is $19. The second thing to do is figure out how to reduce your cost basis, while allowing the stock price enough wiggle room to expose yourself to some positive risk. For informational purposes, GE Dec. 15 $21 puts went out last night at $0.36, while GE Dec. 15 $24 calls closed at $0.28. Why not sell (write) both? That's called a strangle, for the new kids.

By making this sale, you expose yourself to buying more at $21, and to making a sale at $24, both in mid-December. You do this while reducing your net effective average cost by more than $0.60. (If you can not afford to absorb the risk, you can buy back the options at a loss if need be.) If you're in my boat, that would also make a $24 sale quite painless.

Never fret over these things, gang. There are always ways to effectively manage risk, or in this case, mistakes. By the way, good traders make plenty of mistakes. Most just don't discuss them, and thus do not provide a roadmap for a way to punch your way out of a jam when you find yourself in one. Got enough to eat tonight, gang? Clean water? Well then, you're already way ahead, sport.

Netflix (NFLX) went to market on Monday. This news did not really make big headlines, but the firm borrowed $1.6 billion in what was its biggest bond sale. This particular offering will mature in 2028, and it went off at a yield of 4.785%. The deal was oversubscribed, as bankers supposedly fielded orders for roughly $2.5 billion. Why is this significant?

It's no secret that this has been a big year for corporate debt. Firms have raised more than $1.4 trillion here in the U.S. in 2017. That's a record pace. The fact is that this has been a poor year for junk. New issuances across that market have raised a rather paltry $215 billion. Netflix equity has performed very well this year, however, its ratings from both Moody's and S&P Global land the firm's debt in the junk category. What gives?

As you know, I usually dabble in the FANG stocks around earnings time. Last week was no different. Made a few bucks overnight on this name. The stock has come in a bit. Is it worthy of equity investment at this point, worthier than that of a mere short-term trade? Netflix is running into some interference from Walt Disney (DIS) . That has been well-publicized information.

Netflix has already told us that the firm expects to see free cash outflows of $2.5 billion this year. Though subscription has been strong, the firm expects the expense of its own original content to run up to $8.0 billion in 2018. The recently announced price hike was huge, and smart. There will have to be more of that, and growth in that particular space will have to managed incrementally. On top of that, the firm will have to show not just international subscriber growth, but international profit, as well. Bottom line for me: this could be time to wet the beak. That said, I am starting out with about a tenth of a position, rather than my usual one-fifth.

I think the speculative and volatile nature of this stock, coupled with the danger associated with hedging this name through the options market, make this a yield sign. Notice that I did not say "a stop sign". We'll go slow and keep our eyes open.

Charts of the Day (NFLX vs. DIS)

Believe it or not, I think the case can now be made for equity ownership of both of these names, though they appear to be in clear opposition to each other. Now, to be clear, both come with risk, and I strong suggest hedging be done through the options market where it can be done effectively. For your information, I am long both names. I am wearing a full long position in Disney, and actively sell both calls and puts against this position every month, depending on which way I think the wind is blowing. I am also long an odd-lot of NFLX, with the intent to buy more if the market should bestow upon me a discount. 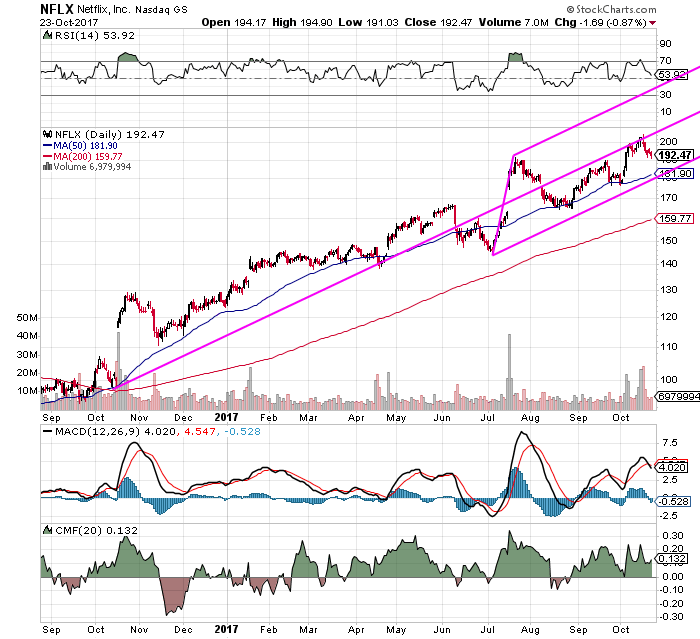 This chart clearly illustrates the stock's outperformance since experiencing a golden cross in the wake of third-quarter 2016 earnings. The Chaikin Money Flow indicator (on the bottom) infers that institutional investment has been positive almost all year, and remains so. However, the moving average convergence divergence (MACD) indicator suggests that the short-term selling that began last week could continue for a bit.

This is where it gets a little tricky. You can see that the stock price has used the 50-day simple moving average (SMA) as support since the summer, and the central line on a year-long Pitchfork model as resistance. What does this chart tell me? My thought is that I will likely triple my small holdings just above $181 if permitted, and then, assuming that this all works out the way I plan to unload half of that accumulation at or slightly above $200. The eventual intent here would be to end up with a long-term investment that is almost entirely made up of house money. 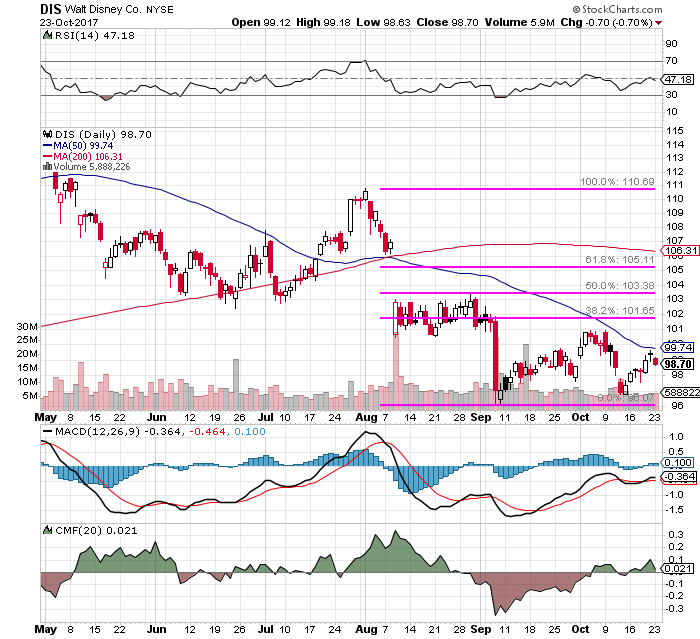 This is a far sadder story, but all is not lost. Unlike the golden cross experienced by NFLX, DIS experienced a death cross back in early August. Much ugliness ensued. Here, we have a Chaikin Money Flow indicator that after a mega-does of institutional selling has started to raise its ugly little head. You also have a MACD that has tried to go positive for two weeks. It's not there yet. That's why we hedge these things, but it's obvious that the stock has found at least some short-term support above the $96 level. Let's take a look at some Fibonacci levels, starting the model with the August selloff. Your 38.2% retracement would land the stock above $101. The stock has already seen resistance there. Should that early October resistance end up looking like the first shoulder on a developing head and shoulder pattern, the thought here is that we may get a chance to make a sale above $103, as that 50% could be the head in such a pattern. Hey, gang. It's a plan.