Andrew Left's Citron's Research published a smartly timed 180-degree opinion shift on Tesla (TSLA) at the market open on Tuesday morning, engineering a material short squeeze in the face of a major market selloff. I say smartly timed for one main reason, and that's the Monday evening announcement that Tesla is going to report third-quarter financial results on Wednesday, Oct. 24 after the close.

The timing of the Tesla Q3 announcement was notable for two reasons. First, Oct. 24 is at least one week earlier than it usually reports. Second, the "fuse" in terms of a heads-up was 48 hours -- not the 10 days or two weeks that the company normally provides.

As a result, there was no shortage of overnight theories as to the reason for this unusual scheduling. Those theories ranged from very bearish to very bullish. Citron latched onto the most bullish of them all -- that the earlier announcement is a positive indicator of better results.

One can't totally disagree with that theory. In isolation, reporting earnings a week or more earlier than usual should be a good sign -- all other things equal.

However, this report will come in the context of the company having promised a specific financial performance for Q3 -- GAAP profitable, and Free Cash Flow (FCF) being positive. One might have thought that if the company had achieved its guidance, it would have preannounced that achievement in early October already.

After all, the company's CEO is hardly shy about tweeting out the slightest whiff of good news that could be good for the stock.

Yet, the company has been silent on those financial metrics. Perhaps this will be the exception that confirms the company's rule. Perhaps the Q3 results are murky and can be interpreted in multiple ways. We just don't know.

Everyone knows -- or should know -- that Tesla's Q3 saw the most favorable of product mix circumstances that the company can expect to obtain until at least the Model Y makes it to production in volume, which is at least two to three years from now. As a result, whatever "peak" earnings (if any) and free cash flow the company manages to print for Q3, it will be as good as it gets for a long time.

Therefore, it's far from certain what the actual Q3 print will even mean, if it does somehow manage to meet the company's guidance. Will the Street see through the temporary nature of any decent Q3 financial performance, or will it spike it straight up in a sugar rush? With TSLA, you just don't know -- and Citron's answer seems to be "Yes, sugar."

However, I did read the full Citron report and Left's "fundamental" reasoning behind suddenly going from hating TSLA to liking the stock, is simply uninformed, in my opinion.

Here are the reasons why.

First, Citron talks about the Model 3 selling well. Yes, it sold well in Q3, but there are two fundamental reasons for that, that are both unsustainable.

The first reason is that Tesla was working from eating the backlog that it created ever since March 31, 2016. It delivered the Model 3 in decent volume for the first time, even if at under 4,200 Model 3 cars per week produced, it remains below where it promised to be last December.

Since Q3 ended, the Model 3 activity has slowed considerably. I can see this because I have gone around to some Tesla delivery centers and I see Model 3 cars that have been sitting there for well over a month now, and are not moving. Before Oct. 1, they were moving off the lots faster. Now, not nearly as fast. Yeah, anecdotal I know. But that's sometimes the best indicator.

Citron also brings up that the Model 3 is beating various other sedans in U.S. sales -- Mercedes, BMW and others. That was true in the last few months. But there are two answers to that too, that Citron does not address:

First, Tesla underprices its product. Unlike the other automakers, Tesla is running its business at a loss. Other automakers, despite whatever other problems they've got -- and there are plenty of them -- they are at least nicely profitable in their ongoing operations right now. They pay for massive R&D programs and capital expenditures from profits and cash flow. From the points of view of balance sheet and income statement alike, they haven't been in this good a shape in decades.

Ask yourselves what would happen to those market-share numbers if those other automakers were to cut their prices 25% across the board. Their sales would soar too -- partially at the expense of Tesla.

Tesla has proven one thing: It is possible to sell a dollar for 80 cents. Bravo! But is that sustainable?

The other reasons the comparison with the other automakers is skewed in Citron's research, is that Left's comparing Tesla against the sedan models -- not the crossovers and SUVs. The reality is that if Tesla didn't exist, the sedan sales of those other automakers would be down anyway -- as they are cannibalized by their very own SUV sales.

The area where Citron goes off-base the most is in discussing the emerging competitive landscape. We are in the early stages of seeing many more electric vehicles (EVs) becoming available in the market. For example, we know that there will be approximately 200 pure EV models on the market by the end of 2022.

All brands will have very attractive EVs. The Volkswagen Group (VLKAF) will have 50 models in the next few years, and then 30 plug-in hybrids (PHEVs) on top of those 50.

That's because the Norwegian consumer is the most well-educated EV buyer, and Norway has the best EV-charging infrastructure, of pretty much any country in the world, by far.

So, with that in mind, what is happening in the Norwegian electric car market this quarter thus far? 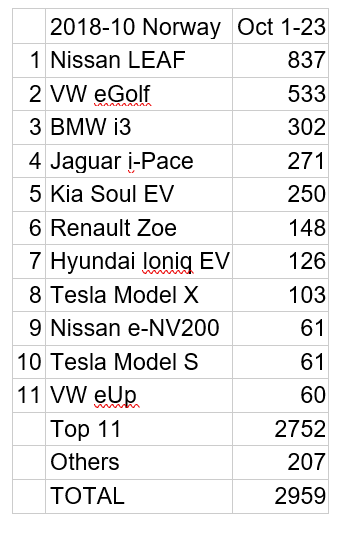 As you can see in the table above, the Jaguar i-Pace has entered the market and is outselling the Tesla Model S and X combined to the tune of 65%.The Jaguar i-Pace is the first premium pure EV competition to Tesla, and Norway is one of the first markets in Europe to get it.

Yes, I know what you are going to say: Tesla's quarters are typically back-end loaded and therefore Tesla will likely beat Jaguar come December. That may be. We shall see if that holds this time around, now that attractive premium competition has shown up. This quarter may be the last time that happens for Tesla, to any significant extent.

Tesla will also be pressured by other attractive long-range EVs that are just now hitting the European market, shortly followed by the U.S. market: Hyundai Kona EV and Kia Niro EV -- both of which will have a range of more than 250 miles and are very attractive and practical alike. Expect full-blown pan-European sales of those two models to be significant when they kick off in a major way in early January.

Hyundai (HYMTF) and Kia will be important in showing the global consumer that the Tesla Model 3 isn't the only sub-$50,000 long-range EV -- and they will still be a few thousand dollars less expensive than a Model 3, while simultaneously pointing to the reliability scores of those companies. Kia and Hyundai lead the quality rankings these days, side by side with Lexus and Toyota (TM) .

On the premium side of the business, Audi will start deliveries in Europe of the eTron at the end of 2018 -- not too many weeks from now. The U.S. will follow in April or May.

Once we get to the latter stages of 2019, Mercedes, Volvo and some others will follow too. General Motors (GM) has yet to tip its hand on its next two offerings, expected around the middle of 2019. Nissan's (NSANY) 230-mile range LEAF will also be in the market by the end of June 2019. By the time 2019 draws to a close, many people will have a hard time keeping track of them all.

In other words, Tesla's competition is already mauling it right now, this very month, in the industry's "canary in the coal mine" -- and more pummeling will hit Tesla's Model S and X models all over Europe in early-mid 2019.

Of course, Tesla's Model 3 is slated for overseas sales in 2019 as well, and that should help offset the burn-off from waning U.S. demand that is starting this quarter. However, there is no word yet from the European authorities that they have approved the Model 3 for sales. That may happen soon, or it may not. Clearly something to watch.

In short, Citron's research piece did not show an understanding of Tesla's current, international, and emerging 2019 competitive landscape -- let alone what is coming in 2020, 2021 and 2022.

As an investor, you should take a ride down to your local Jaguar dealer and take a look at the i-Pace all-electric SUV and ask yourself: Very soon, every automaker will have more than a handful of these all-electric crossovers. Why would anyone buy a Tesla at that point?

I predict that as little as 90 or 180 days from now, Citron's research piece will look very naive in hindsight, at least as far as automotive industry fundamentals are concerned. In the meantime, the stock is up 10% Tuesday.