What is greatness? Is it possible for someone, or something to become great? Might that condition, or quality last for an age, maybe even longer? Shawnee war chief Tecumseh once said "When the legends die, the dreams end; there is no more greatness." Tecumseh certainly was a legend, and was considered great by many in his day. His dream of a unified native government representing a confederation of tribes died with him at the Battle of Thames in October of 1813.

The week ahead might just make or break this earnings season. A whopping 202 companies among those that make up the S&P 500 will report their quarterly results over the next five days. While the intensity will ramp up considerably on Tuesday, Thursday will be the hottest and heaviest day by far. A bevy of high-impact names will report that day, co-headlined after the closing bell by Alphabet (GOOGL) , and Amazon (AMZN) . The focus on the latter will range for Amazon from AWS (Web Services) to Prime Membership to continued dominance in e-commerce.

For Alphabet, the focus is in a different place. While revenue is expected to have grown significantly for both firms year over year, for GOOGL, margins that have been under pressure in recent quarters are the hot topic. The investor take-away might just be rising costs at YouTube, as competition across the streaming business rises, despite how well the rest of the firm's business lines perform.

As the week develops, several large industrial firms will have to address margin compression in their earnings calls, in the way of rising expenses due to the worsening U.S./Chinese trade conflict. Defense contractors will be put in a similar position, as existing and future business becomes questionable in the wake of growing geopolitical concerns in the Middle East, particularly with Saudi Arabia.

There is no doubt in my mind that the week ahead will be highly volatile for investors. Some will say that traders love the volatility. Those that make this blanket statement give this writer a little chuckle, as the statement itself forces one to question the validity of that trader.

While what we do, professionally, is adjust to developing environments, nobody I know, who understands the risks, has ever relished uncertainty. Every successful trader I have ever known simplifies every decision down to the point where that trader is able to make capital decisions in such a way where probabilities might be more effectively determined. The very least successful traders are those who strategy involves "taking a shot here."

Chinese leaders were out and about over the weekend in an attempt to talk up the markets and the economy. Despite a Friday rally that still left the Shanghai Composite 7.6% lower for the week. That index soared on Monday to the tune of more than 4%. What has changed? In the wake of weak third-quarter macro that included a soft number for GDP growth, one thing has become clear. Even more fiscal stimulus is on the way.

The government in Beijing touted newly proposed cuts to personal income taxes, while President Xi made a point, according to Xinhua News, of stressing his administration's support of the nation's private sector. For Chinese stocks, this more than outweighed the openly negative (that's how I took it) interview with Larry Kudlow in the Financial Times this weekend. Kudlow was quite frank. "We gave them a detailed list of asks, regarding technology for example, (which) hasn't changed for five or six months. The problem with the story is that they don't respond. Nothing. Nada."

Kudlow finds the lack of a Chinese response troubling, as he also says that he believes that there likely has been some capital outflow from the nation in response to / exacerbating the depreciation of the Chinese currency. For those keeping score. President Trump still has that last tranche of $267 billion worth of tariffs on Chinese exports to the U.S. in his pocket, as well as the potential increase from 10% to 25% for the already implemented tariffs on $250 billion worth of these goods. Easy? No, gang, the low-hanging fruit has already been picked clean.

My Thought For Today

Trust nothing, least of all these markets. Without humans at the controls, it seems to me that aggregate market moves appear to force technical overshoots based on speed or momentum at any point, and that price discovery has moved ever further away from purity... that being the simple result of well-reasoned demand and supply.

Growing up in the shadow of Shea Stadium, I remember being so excited when my beloved New York Mets had traded for Willie Mays in 1972. My Mother, an avid New York (baseball) Giants fan from their days in Gotham was just as excited as I. (My Dad is a Yankees fan.) We understood that the "Say Hey" kid was a great ballplayer. We did not understand that for Willie, the sun no longer shined brightly on center field.

The Ford Motor Company (F) is expected to put their third-quarter results to the tape after the final toll of the bell at 11 Wall Street on Wednesday afternoon. Consensus expectations are for EPS of $0.28 on revenue of $33.3 billion. There are some whispers out there that EPS will come in higher than that. Will a simple beat be enough? Let me ask you something. How attractive does taking an equity stake appear for a name currently sporting both a forward looking P/E ratio of just 6x, as a 7.1% dividend yield? Eek. The Cat.

My guess is that you may have noticed this name traded at a multi-year low on Friday in response to the downgrade from Overweight to Equal Weight at Morgan Stanley. Morgan also cut the firm's target price from $14 to $10, while analyst Adam Jonas opined on the potential for tens of thousands of job cuts at Ford.

Despite Current and Quick Ratios that remain above the key "one" level, the firm, as of the second quarter, has seen year over year erosion in sales, margins and cash on hand, all while total debt has been on the rise. Levered Free Cash Flow? Yes, that's a minus sign. The point is that this firm was suffering even before these current trade conflicts kicked into a higher gear -- and domestically, the U.S. economy, though robust at a headline level, appears to be past peak autos (and housing and retail).

The stock does not have a lot of downside left, and the share price could benefit from the reduction of overhead, unless that reduction comes in the form of a dividend cut going forward.

By the way, if you are already long these shares, they will trade ex-div today, payable December 3. That payment is fine, but I mean moving ahead, the dividend does seem exorbitant. 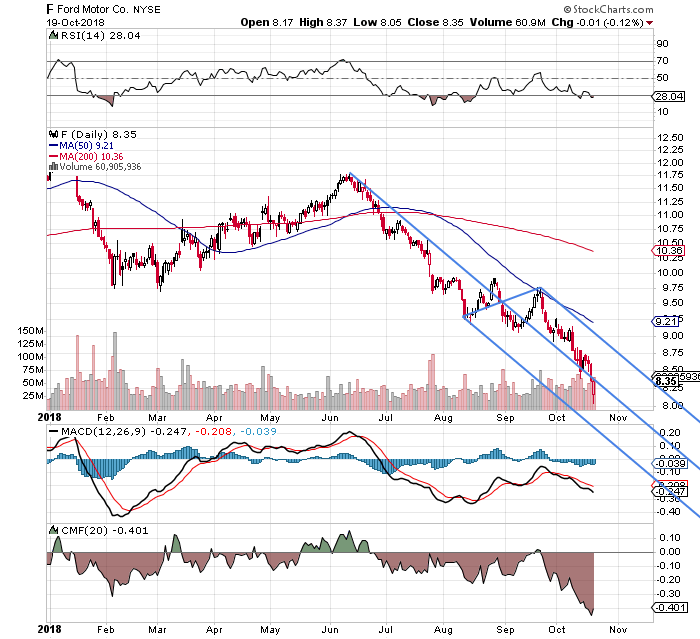 There obviously is not a lot of nice things that one can say about this chart. The daily Moving Average Convergence Divergence, Relative Strength and Money Flow are all ugly with a capital "U". The Pitchfork, if held through not only earnings, but to the end of November, suggests eventual $8.25 resistance, as well as support that could drop to levels in between $7.50 and$ 7.75.

I do not feel comfortable buying this stock, and shorting this name could blow up on the trader very easily on the slightest positively perceived news. Fortunately for short sellers, only a rough 3% of the entire float is held in short positions, so this is not a crowded trade, but if going that route, the trader will surely need to hedge the position. Here's how.

Given that protection on this trade is priced so cheaply, this is one time where I would not oppose the use of options in order to mitigate risk overtly, rather than to simple manipulate net basis. If the equity trade is carried forward, I would suggest maintaining the hedge throughout the life of the position.

There are no significant domestic macroeconomic events scheduled for today.

Get an email alert each time I write an article for Real Money. Click the "+Follow" next to my byline to this article.
TAGS: Investing | U.S. Equity | Transportation | Economic Data | China | Markets | Economy | Jobs | Newsletter | Options | Politics | Risk Management | Stocks