Fiat Chrysler Automobiles N.V.  (FCAU) is trading firmer this morning in New York. Traders seem to be reacting to the news that Fiat Chrysler is selling its Magneti Marelli division to Kohlberg Kravis Roberts's Calsonic Kansei (CLKNF) in a €6.2B transaction. Interesting news, but I prefer to check out the charts and indicators to see if it is worth responding to with investment dollars.

We last looked at FCAU in late July and wrote that, "The charts and indicators of FCAU were bearish before the latest corporate news. The daily chart shows potential support in the $18-$17 area and that may contain the decline but a close below $17 will open the way to still further losses."

In the daily bar chart of FCAU, below, we can see a downtrend in force from January -- prices have declined about $10 from their peak around $25. The 50-day moving average line has been in a downtrend since July and the slower-to-react 200-day average line turned from flat to negative this month.

The daily On-Balance-Volume (OBV) line peaked in late January and its nine-month downtrend tells me that sellers of FCAU have been more aggressive for a long time. The trend-following Moving Average Convergence Divergence (MACD) oscillator has spent most of its time since May below the zero line.

In the weekly bar chart of FCAU, below, we can see a similar bearish setup that we see in the daily chart above. Prices are below the declining 40-week moving average line. The weekly OBV line shows a peak in January and another peak in April before a multi-month decline.

The MACD oscillator on this longer time frame is bearish and it will probably take a rally and a number of weeks before a cover shorts signal could be generated.

In this Point and Figure chart of FCAU, below, we can see a downtrend and a downside price target of $14.87. Prices are due to open higher Monday but without any prior signs of accumulation (buying) I would not anticipate the rally to go very far. 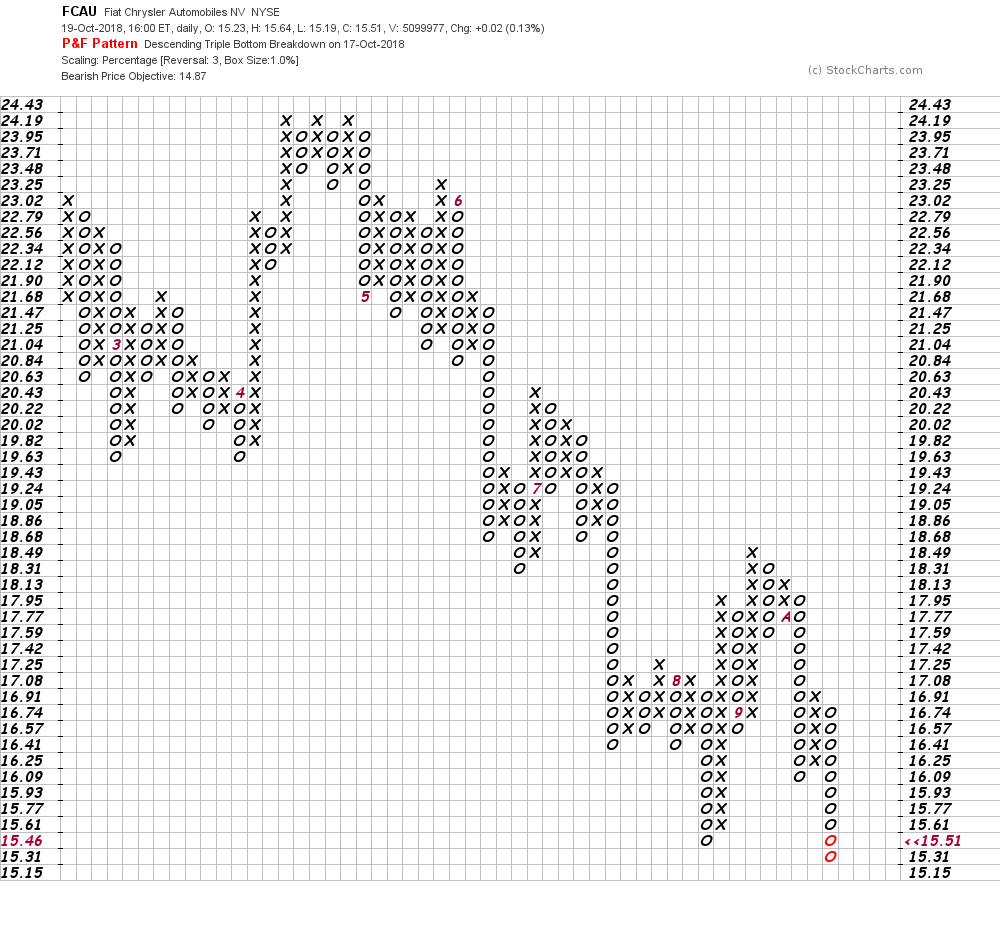 Bottom-line strategy: FCAU could try to stabilize around $15 but I suspect it could take many months before the stock is in a technical position to make a sustained rally.
Get an email alert each time I write an article for Real Money. Click the "+Follow" next to my byline to this article.
TAGS: Investing | Stocks