Might as well go ahead and start getting the hats made now -- the Dow Jones Industrial Average has its sights set on 30,000.

At this point, that's more a question of "when" than "if".

At the start of this year, the Dow pushed past 20,000 for the first time in history. And this month, the Dow has just definitively blown past 23,000. Before we get any further, let's be clear about one thing: there's no particular significance to the 30,000 number versus Dow 29,999. While there are some psychological effects around eclipsing a big round number for the broad market indices, hitting Dow 30k is all about the fact that we're in the midst of a rip-roaring equity rally that's not showing any signs of slowing down.

This is hardly uncharted territory.

If investing with stocks at all-time highs leaves you with a queasy feeling, rest assured, we're actually in the market's normal mode.

Over the last six decades, the big S&P 500 index has spent approximately half of its trading sessions within 5% of all-time highs. In other words, there's a strong precedent for even higher equity prices ahead.

And that's made most obvious in the S&P 500 rather than the Dow: 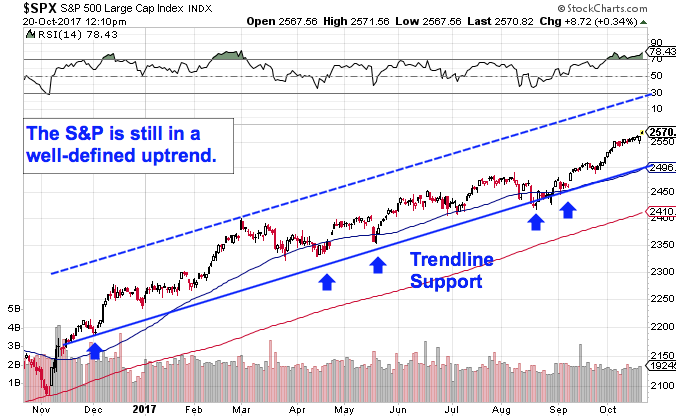 This technical setup in the S&P is literally as simple as they get. The big index has been in a textbook uptrend since the end of 2016, bouncing its way higher in a textbook uptrend all the while. And with stock prices smack dab in the middle of that trend channel, there's plenty of upside room for stocks as we head into the final stretch of 2017. 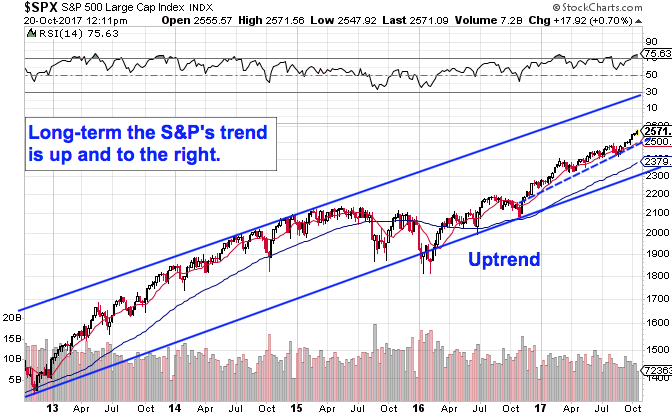 The primary trend in the S&P 500 remains up and to the right. Moreover, we're far from make-or-break mode here. The S&P 500 could retract back to the 2,300 level without calling that trend direction into question.

I said a moment ago that we're not in uncharted territory -- that goes beyond the fact that new highs are "normal mode" for the market. We're also in an environment with an exceptionally high correlation to the recent past right now. The S&P 500 from Nov. 1 through Friday's close has an incredible 94.5% correlation with its price action from Nov. 1, 2012 through mid-October of 2013, a timeframe that was followed by another 10.4% total return in the 12 months that followed.

Once again, there's a precedent for the price action we're seeing right now.

The only question is the best way to play it. In other words, which stocks are set to rally the most along the way?

Once again, the sequel shouldn't surprise you if you've seen the original. 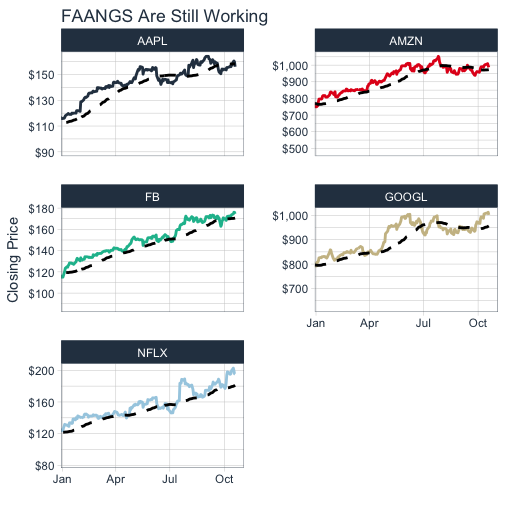 Consider the fact that the S&P 500 is currently weighted 23% toward the tech sector, a higher weight than any other single sector of the market. Simply put, FAANGs and their tech peers have been dragging the rest of the stock market higher all year long, and that trend isn't showing any signs of fatiguing right now.

In fact, after basing in the late summer, a handful of FAANGs like Netflix, Facebook, and Alphabet are actually kicking off new breakout moves to new highs this fall, signaling that buyers are still definitively in control of the price action.

These are buy signals, not caution flags.

To be sure, no trend lasts forever. But at this point, we simply haven't seen any of the technical deterioration that would warn of a change in trend. In fact, the playbook for this market environment says that Dow 30k is the next stop. Plan accordingly.