Netflix (NFLX) staged a nearly 20% rally on Tuesday on the strength of greater-than-expected earnings. The company cited audience enthusiasm for its own content such as "Stranger Things" and "Narcos" as significant drivers of profitability.

In light of the recent low level of market volatility, I felt like I was becoming calibrated to low volatility and range-bound action so I decided look at the history of daily changes in NFLX to make sure I was appropriately calibrated and find out how Tuesday's move stacked up. Here's a histogram of daily percentage changes since 2015. 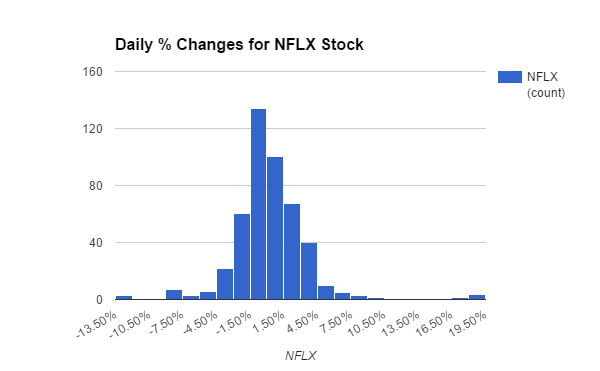 NFLX is a volatile stock, but the post-earnings rally stacks up at the far right edge of the histogram, indicating that investors believed NFLX's earnings were a substantial surprise. I wanted to see if history says anything about how NFLX moves after such a large increase.

Here's a table with forward returns for NFLX after a 10% or greater one-day gain since 2013.

I'm not prepared to draw any conclusions from this study, given a small sample size of seven, but NFLX has continued to rally 20 days out following large rallies like this in the past.

Abstracting a bit, I see this as anecdotal evidence that companies that figure out how to deliver on the web or in mobile are doing well. I also see a possible "game-changers theme" where perhaps some combination of a change in fundamentals along with price confirmation augurs a trading setup or establishes a trend.

These kinds of questions and observations go into my trading notebook and become fodder for further investigation. I invite readers to email me with themes that are working.

Get an email alert each time I write an article for Real Money. Click the "+Follow" next to my byline to this article.
TAGS: Investing | U.S. Equity | Technology | Earnings