There's been little to interest me recently in the oil space -- as I've written over and over, there's a longer timeline that's been put into play for the oil bust, particularly since the outline of an OPEC production deal was struck in Algiers last month. The one small light I see at the end of the tunnel has been in natural gas -- and recently, the increase in injections has depressed gas prices and their stocks.

That's created an opportunity to buy natural gas stocks at the low end of a long-term range, and I'm looking specifically at increasing my position in Southwestern Energy (SWN) , which reports its third-quarter earnings tonight.

I know -- it's rolling dice to buy immediately before an earnings report. That game is normally reserved for insiders or algorithmic magic boxes, who can "sense" the smart money during the day, much as the chart watchers do at the racetrack, following the payoffs of exotic bets right before the starting gates open.

But Southwestern has a history of being buried the day before earnings in the last several quarters, whether or not those reports have in fact shown beats or misses. And with Southwestern so close to the lower limit of its trading range for the past several months, I think it's worth a roll of the dice today.

Don't get me wrong, either. I'm not investing in Southwestern because it is a stellar natural gas company. It has shown a horrible example of over-leverage during the oil and gas bust, and has been forced to sell core assets in West Virginia at a loss to reduce debt. Cash burn continues and the wager on Southwestern is based on the lone idea that natural gas will recover to sustainable prices above $4/mcf before oil shows itself above $60 a barrel. Lots of the reasons I have for this -- including liquefied natural gas prospects, lackluster injections and storage, weather forecasts and a likely El Niño coming into the winter -- have all been outlined in previous columns and remain in play.

And the chart doesn't look particularly great either. While the daily chart is showing momentum to the downside is just gaining steam, the weekly looks like it's only beginning to roll over. 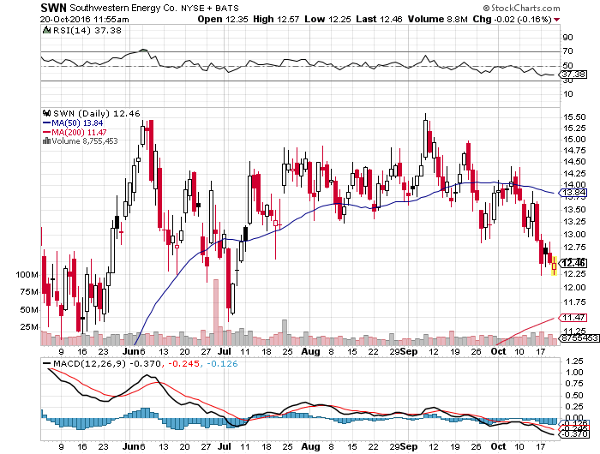 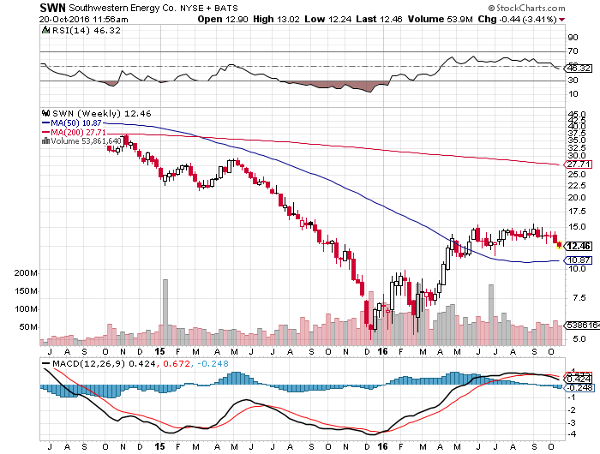 So why add now? I have a gambler's idea that all these counterintuitive indicators are actually showing a bottom sign, or a soon-to-appear bottom sign -- and I don't want to miss a low basis price on SWN if it happens to beat earnings strongly later this evening.

So I'm advising a small add to an established position today -- Southwestern Energy at $12.50.

Get an email alert each time I write an article for Real Money. Click the "+Follow" next to my byline to this article.
TAGS: Investing | U.S. Equity | Energy | Earnings