It was a hot, humid South Carolina night. Seventeen years old. My high school friends were probably drinking in Cunningham Park in Queens, or prepping for college. I was covered in mosquitos and sand fleas. Encumbered by the full weight of our "battle rattle", we were about to do what was then known as the "night booby trap" course at Parris Island, way before night vision technology existed. The course was set up by the older sergeants who had all served in Vietnam. Disorienting machine gun fire, simulated incoming mortar fire. Trip wires. Hanging surprises. Always having been meticulous, I made it through that course slowly and did not trigger any traps. A passing grade for the course, right? My team had failed. I had not helped the less able around me get through. The shame I felt that night, returns in spades as I write this missive. Never made that mistake again. Nearly four decades later.

Thursday's trading session was in way similar to an obstacle course. On financial television late in the day, I was asked of all of the high profile headlines, what had been the largest impact on my day. I had to think for a second, as there were simply too many headlines to consider. Given my penchant for investing in aerospace and defense, my answer for public consumption was the decision by U.S. Treasury Secretary Steven Mnuchin to take a pass on the Future Investment Initiative conference in Saudi Arabia next week. That had nothing to do however with my decision to take partial profits in the names that I had the largest one week profits in, and place that money more defensively.

My answer could have just as easily been any number of other global events currently impacting potential economic growth, from Italian fiscal policy to stalled Brexit negotiations to the sagging Chinese economy to segments of domestic macro-economic performance that seem not in line with superb headline performance, and finally what I think is an overly aggressive U.S. central bank.

My point is this. There is almost no way to avoid being touched by one of these items unless one avoids risk altogether. This game is as much about sticking to one's designated set of disciplines as it is about having good ideas. On every position you take, I want you constantly thinking about how you can lower your net basis. This is every bit as important as anything else you do. We all know that option premiums whither and die over their lifespan, kind of like the value of a new car. Purchasing options is an act of fear. Knowing how to read a chart, and where to write calls or puts against equity holdings, I have found over the course of a long career to be more effective in producing winners than any other strategy I employ. Hard to explain the joy in selling an equity below where you bought it and still turning a profit. You're scared? Let those with impure hearts know fear. For us, fear is controllable. We win, or we fail. Together. Back to back.

The Sounds of Panic

In the U.S., December gold futures actually sold off late Thursday. Clearly, investors are concerned, but still no sign of outright panic. China, however, is a different story. The Chinese government's National Bureau of Statistics went to the tape with a plethora of data overnight. Third quarter GDP printed at year over year growth of 6.5%, below expectations, and the slowest pace of growth for any quarter in nine years. Industrial Production, far more important domestically in China than in the U.S., hit it's slowest pace of growth in two and a half years.

Chinese stock markets, though down more than sharply year to date, rallied overnight. Why? Expectations are that the government might borrow to build. Regionally. Again. Perhaps more devaluation of the currency? Maybe it was just the Chinese government officials who were out in force trying to calm investors. Vice Premier Liu He tried to reassure the public on trade. He said: "The psychological impact is greater than the actual impact." He also assured Chinese investors that China and the U.S. were in contact with each other, pointing toward next month's meeting between Presidents Trump and Xi at the G-20 meetings in Argentina.

Still, according to the Financial Times, the Chinese Academy of Social Sciences currently predicts a further decline in GDP for 2019, to 6.3%. President Trump still has that last tranche of $250 billion worth of potential tariffs on Chinese imports in his pocket for potential implementation, maybe in January. One thing we do know. By then, the U.S. mid-term elections will have been decided. That outcome could shift the balance of power at this summit.

While I often lament the rising value of the U.S. dollar versus it's peers, there is clearly a disturbance in the force. In what should be headline news, but seems buried on page 47, it appears that China and Russia are putting together a pact that would boost the importance of both the Ruble and the Yuan in trade between the two countries, thus reducing international reliance upon the greenback.

Anyone who watches global economic development for a living really has been expecting something like this for quite a while now. What are the implications? Will other countries try to enlist themselves in such an idea? Does this ultimately lead the planet away from the supremacy of the U.S. dollar as a reserve currency? Is this an opening for the eventual implementation of a currency without borders, such as the IMF's Special Drawing Rights (SDRs), or a crypto-currency such as Ripple to gain prominence? I really do not know how this develops, but the U.S. dollar is the only item mentioned here not likely to benefit in some way. Be careful what you wish for.

Today is the 31st anniversary of the stock market crash of 1987. There have been several "sort of" crashes since, but nothing like what happened in one day at that time. Due to the circuit breakers that now exist, it's doubtful that markets will ever again be permitted to decline by 23% in one session. In addition, due to the fact that markets mostly trade electronically in the modern era, and much of the decision making is now made by those who write algorithms and not by actual traders, it becomes impossible to even imagine the intensity of those times ever again being matched. I was working in the old booth ZA, under the pulpit in the NYSE's Main Room that day. To my left? Donaldson, Lufkin & Jenrette. To my right? EF Hutton. Behind me? Salomon Brothers. I've outlasted them all.

Last week, I mentioned quite a few names that I had either initiated or added to late on Wednesday, and late on Thursday. Over the past two days, I have returned both Adobe (ADBE) and Amazon (AMZN) to their original sizes. Both were very profitable trades around core positions that were needed to fund losses elsewhere. That worked like a charm. Sarge, you're so cool.

I also bought Apple (AAPL) last week, and that one is right back at net basis, even with the associated games I play that impact net basis. Sarge, I take that back. You're not cool at all. So what now? What do I do with Apple? The name still does not report for two weeks. Clearly, China matters here, and not just for the hacking news that broke earlier this week.

There are a couple of catalysts for the name. This morning, Wedbush initiated coverage of the name with a $310 target price. Wedbush's Daniel Ives thinks that the firm will beat consensus iPhone sales in 2019, and mentions the large corporate repurchase plan in the piece. Secondly, the firm has scheduled a promotional event for Tuesday, October 30th. Expectations are that updated versions of the iPad and the MacBook will be featured. 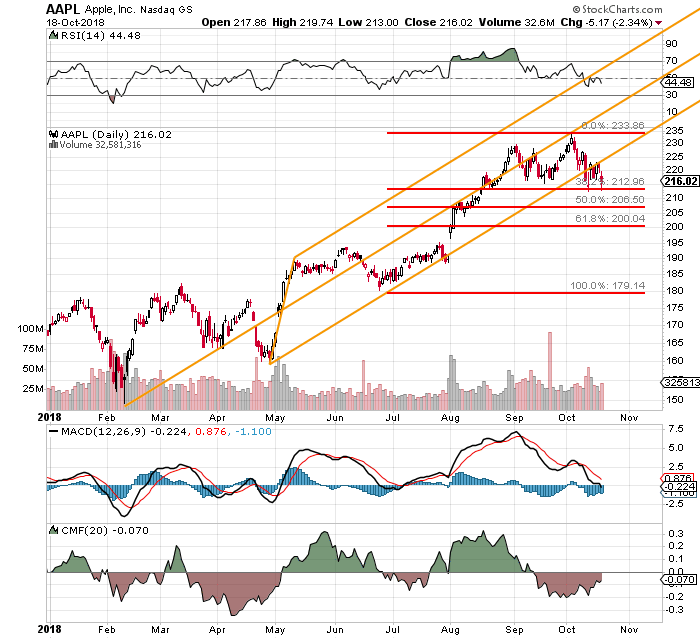 The possibly broken Pitchfork model that had been in place since February will catch your eye. What I want to catch your eye is the twice tested support level at $213. That spot just happens to be a 38.2% retracement of the June through October move higher. That is where the battle will resume on the next selloff.

Keep an eye out for positive swings in the daily MACD, and the Chaikin Money Flow. These indicators will matter in the immediate to short term. Though I am nowhere as optimistic as our friend at Wedbush, my target price is also above the industry average. I do expect to make money in this name.