PayPay Holdings, Inc. (PYPL) is up sharply in early Friday trading as investors react to its earnings release. A number of technical sell signals developed over the past two months so the key question now is whether the strength Friday can be sustained? Let's check out the charts and indicators of this Action Alerts PLUS holding.

To add to the price decline the On-Balance-Volume (OBV) line did not make a new high in September when prices made new highs. The OBV line has moved lower in October telling us that sellers of PYPL have been more aggressive with heavier volume being traded on days when the stock has closed lower.

In the bottom panel of this first chart is the 12-day momentum study, which compares today's price to the price 12 days ago. From May to September momentum slowed and diverged from the price action. In October prices finally declined and so far we do not see a bullish divergence to give us confidence in a rally.

In the weekly bar chart of PYPL, below, we can see how prices stayed above the bullish 40-week moving average line until this month. The weekly OBV line has been stalled since November and diverged from the price action.

The OBV line began to weaken in June as sellers subtly increased the pace of selling. In the lower panel is the weekly Moving Average Convergence Divergence (MACD), which has turned lower (again) for another take profits sell signal.

In this Point and Figure chart of PYPL, below, we can see a longer-term potential downside price target of $66.41. This chart does not have the pre-market rally but a rally to $82.25 should improve the chart and that is likely Friday. 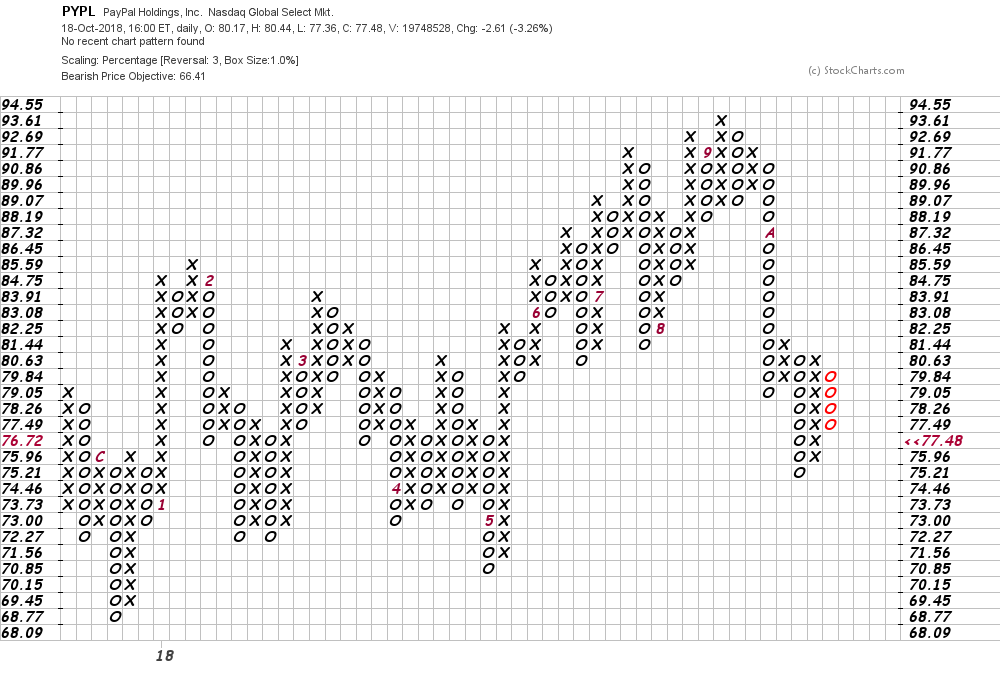 Bottom-line strategy: The early rally in PYPL Friday is good for the bulls but I would want to see a close or two above the 200-day moving average line. If that happens then aggressive traders could probe the long side if they can afford to risk below $75, the recent low.