The last time we visited with United Rentals, Inc. (URI) , was at the end of June and we recommended, "Aggressive traders could sell URI here on this bounce or on a close below $101."

If you waited to sell URI until late July you could have made money as the stock retreated again into late August. Over the past seven to eight weeks URI has rallied to new highs. Now what? Further gains? A sideways move? A downward correction?

In this daily bar chart of URI, above, has climbed more than forty dollars in a relatively short period of time. Prices are above the rising 50-day moving average line and the rising 200-day line. The On-Balance-Volume (OBV) line has moved up with prices to confirm the price action and tell us that buyers of URI have been more aggressive.

Even though the trend is still up the Moving Average Convergence Divergence (MACD) oscillator crossed to the downside for a take profits sell signal.

In this weekly chart of URI, above, we can see that the rally from the early 2016 low has reached a new high. Prices are above the rising 40-week moving average line. The weekly OBV line is pointed up but it has yet to register its own new high to confirm the price strength above $132.

The weekly MACD oscillator crossed upward from above the zero line for a fresh outright go long signal in early September. 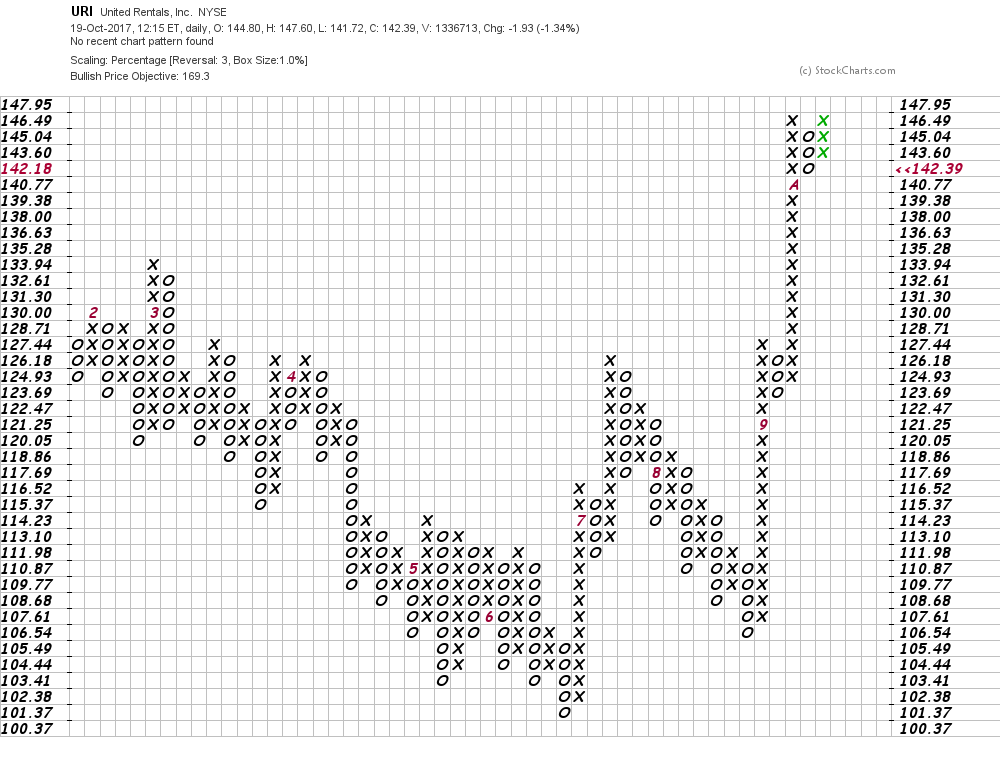 In this Point and Figure chart of URI, above, we can see an upside price target of $169 being projected and we can also see that a decline to $140.77 will weaken the chart picture.

Bottom line: URI has made a significant advance. While prices are extended (overbought) on the upside we do not yet have sell signals. A period of sideways consolidation would be welcomed before further strength.

Get an email alert each time I write an article for Real Money. Click the "+Follow" next to my byline to this article.
TAGS: Investing | U.S. Equity | Earnings | Stocks

I do believe that having no economy is temporary. I also believe that what comes out on the other side will be smaller, far less global.

Here's a Trade Idea for Lululemon

I think LULU is structured to survive well in a tough environment. Is 'survive well' a good enough reason to allocate capital?

A Way to Trade Lululemon on Earnings

As with so many companies, we already know the reporting quarter should be relatively strong.

It's a paradigm shift that all started with Zoom and Cisco's Webex.

I do like the attitude of this firm and its leader, CEO Sanjay Mehrotra, moving forward.