The good news today is that the S&P 500 is working on two positive days in a row. It's been about two weeks since that last occurred and it wasn't particularly impressive. The bad news is that today's follow-through isn't very impressive either.

Breadth is fairly solid with about 3,900 gainers to 2,300 decliners and the big-cap technology names such as Alphabet (GOOGL) , Netflix (NFLX) and Facebook (FB) are attracting some interest, but Apple (AAPL) has faded and Intel INTC is a major problem. (Alphabet, Facebook and Apple are part of TheStreet's Action Alerts PLUS portfolio.)

Oil is doing well on inventory numbers and steel names are up for a second day, but biotechnology is struggling again. The biggest challenge for traders is finding new themes that have some momentum.

Today, I've been trading Mimecast (MIME) , which broke to new highs out of a nice base, and Emerge Energy (EMES) still looks good on strong oil.

One name I'm watching more closely is Acacia Communications (ACIA) . This was a huge winner in July and August and I've been waiting for it to form new support after its recent secondary offering, priced at $100.

Last quarter, the big-cap stock that probably had the best earnings report was Facebook. Not only did the company beat but at an accelerated rate. The stock hasn't done a whole lot since then, but the chart is developing well and I'm inclined to build a position into the anticipation in front of its next report, which is due on the afternoon of Nov. 2. 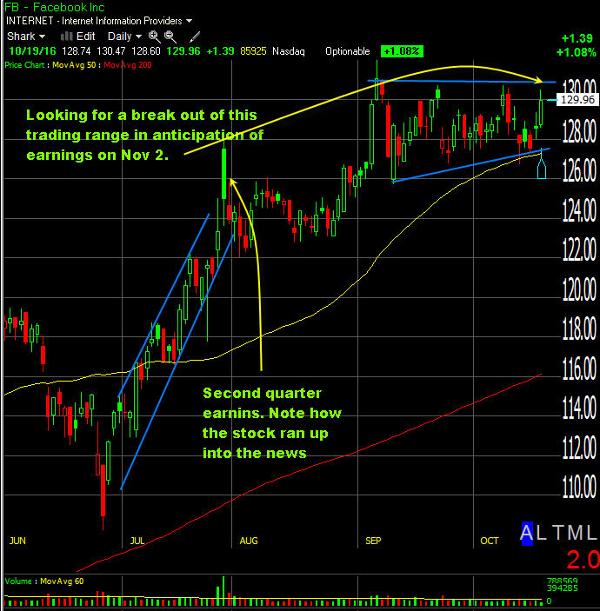 There Are Multiple Bullish Divergences That Push Me Into Comcast

This trade is essentially a stock replacement strategy.

JFrog Shares Have Bottomed and Can Be Bought