Regions Financial Corp. (RF) looks strong on the charts and could break out to new multi-year highs in the months ahead. It could double from here - rare for a financial, in my opinion. Let me make my case.

In this 12-month daily bar chart of RF, above, we can see a pattern of higher lows and higher highs -- the simple definition of an uptrend. RF had a deep correction in June, but in terms of time it was short-lived and prices rebounded relatively quickly. During the June decline the On-Balance-Volume (OBV) line did not decline much, telling us that the buyers of RF did not rush to sell but rather they held the positions acquired in January through March.

The OBV line continues to point higher and confirms the price strength this year. The trend-following Moving Average Convergence Divergence (MACD) oscillator in the lower panel has been above the zero line (positive territory) since early August. Going back to the price chart, RF is above the rising 50-day moving average line and the slope of the slower 200-day average is turning positive. All in all, a positive picture.

We included a five-year weekly chart of RF, above, to point out a few more bullish technical clues. RF has corrected its earlier gains to a late 2013 peak. Prices have broken above the downtrend line (not drawn) from that 2013 zenith. RF is above the now rising 40-week moving average line. The weekly OBV line has been inching higher the past four months and the MACD oscillator is in a bullish configuration above the zero line. 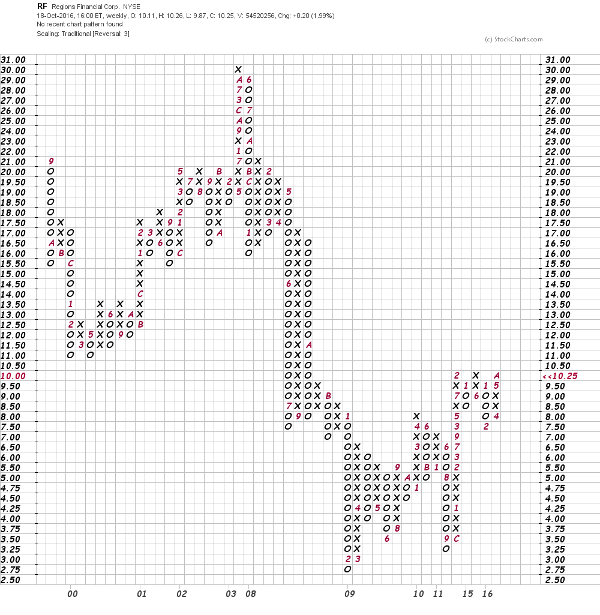 In this long-term weekly Point and Figure chart of RF, above, we can see a strong base pattern and that a weekly "print" at $10.50 will be an important upside breakout. This chart does not show meaningful resistance until the $16 level. That is what I call an attractive price target!