Wednesday night on Jim Cramer's Mad Money show he did another installment of his "Power Rankings" series. Cramer started to cover the industrial sector. These stocks are a volatile group that began 2018 strong, only to get hit as the trade war began and hit again as rates rose.

On top of the rankings was Union Pacific (UNP) . This West Coast railroad has managed to be up 12% for the year. Freight prices are on the rise and that's great news if you're a railroad, Cramer noted, yet the shares trade for just 17 times earnings. OK, that is the fundamental story. Now let's check out the charts.

In the daily bar chart of UNP, below, we can see the uptrend of the past 12 months. There are rallies followed by periods of consolidation or sideways price action to correct the gains. Higher highs and higher lows can be seen but recently we could be seeing a change in that pattern. Prices declined this month and are now below the flat 50-day moving average line and are very close to breaking below the August low. Breaking the August low would break the pattern of higher lows. UNP is still above the rising 200-day moving average line for those traders who rely more on math.

The daily On-Balance-Volume (OBV) line shows a rise from late October to the middle of September where it starts to weaken. The OBV has not broken its uptrend but the recent softness tells us that sellers have become more aggressive at these price levels. The trend-following Moving Average Convergence Divergence (MACD) oscillator is close to crossing below the zero line for an outright sell signal.

In the weekly bar chart of UNP we can see that prices have more than doubled from their early 2016 nadir. Prices have stayed above the rising 40-week moving average line for much of the past three years but that might be coming to an end.

The weekly OBV line shows a small peak in September and the weekly MACD oscillator has crossed to a take profits sell signal.

In this Point and Figure chart of UNP, below, we can see that prices reached an upside price target of $162. There appears to be good support below the market in the $140s but a decline to the upper $130s would be breaking the 40-week average line on the chart above. 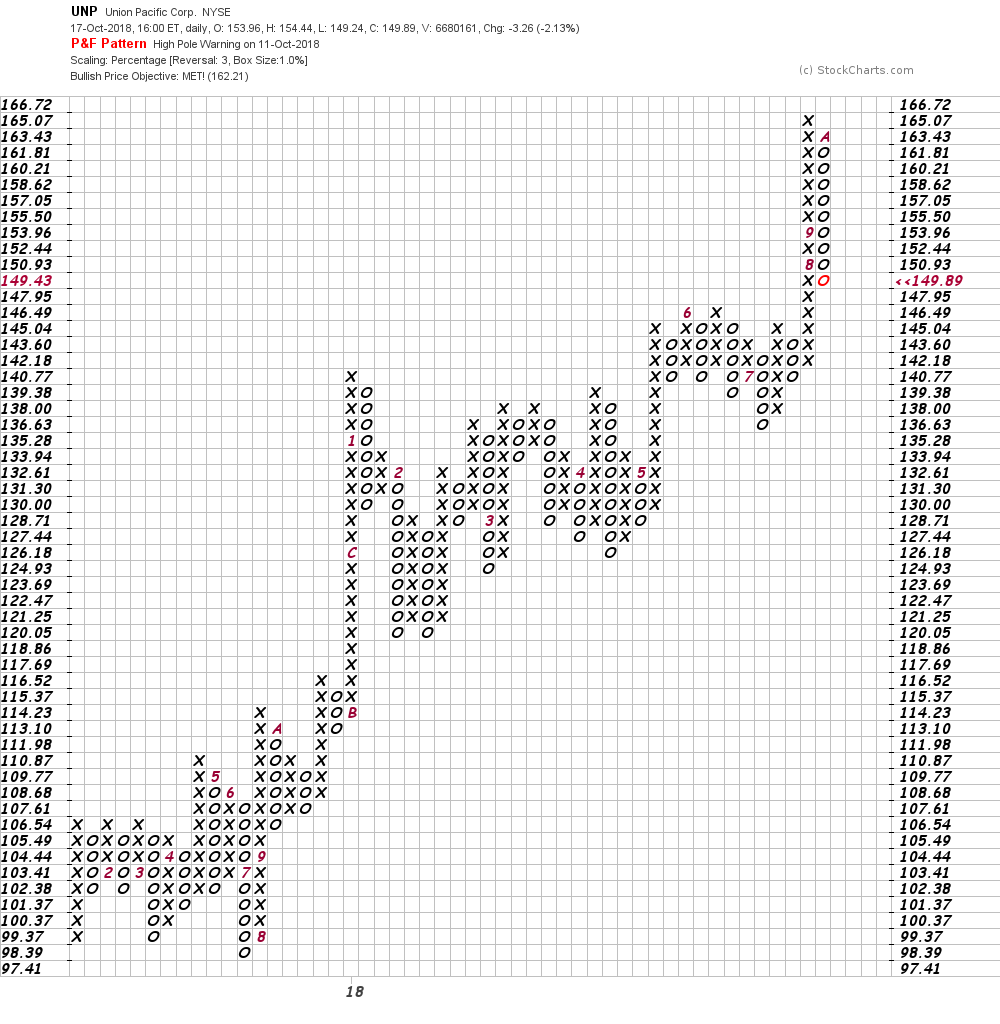 Bottom-line strategy: UNP has had a good run but some subtle changes in the chart and indicators suggest we might want to be a little more cautious at this intersection.