The Ability To Reason

Sentience. This was the difference. Some creatures learned to live in communities. They learned to hunt, and gather as part of a team. These creatures built new knowledge on top of old knowledge. They figured out how, through cooperation, communities might broadly benefit from an array of talents and skill sets, while in the process smoothing out individual weaknesses. These creatures, that were different, that displayed the ability to both learn and reason are known as the Hominidae or simply...the Hominids.

I am no biology major. These Hominids include modern humans, now extinct human relatives, and the Great Apes as well. I'm not really sure where the FOMC branches off, but something has clearly mutated in the nation's capital. Not only do the Minutes of the policy meeting of September 25-26 set off alarms, it really makes one wonder. We know that those who define domestic monetary policy for the rest of us are having some trouble figuring out just where the mythical neutral interest rate is. That's okay. That rate, defined as the price for short term credit that would neither be accommodative nor restrictive might be a range, or it might be razor thin. We just don't know.

The fact that the central bank is willing to play games with restricting an economy that has already shown itself to be past-peak autos, past-peak housing, and past-peak retail due to the fact that the labor market is tighter, displays, at least in my opinion a broad lack of work ethic at the central bank. Stop looking at headline data-points. Leave the castle. Talk to the people. Consumer level inflation, as displayed just last week, has not gotten away from us, neither has wage inflation. Of course it might. Their concern is correct, but the willingness to place a stick in the spokes of a bicycle in motion, while also placing large rocks on the bike path (quantitative tightening) is reckless.

I think you all know that I am a hard currency style economist. I was neither in favor of how long the central bank kept their quantitative easing program in place, nor how long the committee kept short term rates at the zero bound. That is just the point. The "gradual" pace of interest rate increases has been anything but gradual... all while experimentally reducing the size of potential liquidity available. It's the reduction of the size of the balance sheet that is being paid the least respect by academic economists, but perhaps as an unknown entity, presents as a danger of an unpredictable nature. Maybe the academics can stop and listen to the practitioners?

As for that subset of participants that "expected that policy would need to become restrictive for a time," I have no words. Get this through your thick heads... policy never has to become restrictive intentionally, unless forced by macro-economic conditions. The dual mandate of the central bank includes stable prices (check), and maximum employment (Hmm, sounds like these two are in good shape). Hey, I'm a kid of the 1970's. I fear rampant inflation as much as anyone. I get it, but there comes a time when the ability to reason develops as the ability to adapt. We already know that much of this economic expansion is due to fiscal policy that did not provide enough on the revenue side to counter spending. Guess what? The creators of that fiscal policy have openly acknowledged this shortfall, and are just as openly trying to address spending. Time for the central bank to show the same level of concern for their misplaced aggression.

You kids may have noticed that Health Care has taken sector leadership away from Information Technology and Consumer Discretionaries. This is true, whether your snapshot is in one month, three months, six months, or year to date. This is defensive positioning for those new to this game. This is where those who manage money for a living have chosen value investing over investing for growth (even with lofty GDP numbers dancing in their heads).

If one only goes back one month, number two is the Utility sector, and number three would be the newly minted Communications Services sector (that includes Telecom). All this search for value... all this is the seeking of a dividend payment even with yields supposedly pressing higher at the long end of the curve. For those wondering, most sector rotation models consider Health Care a late cycle leader. What comes after what we in the business refer to as "late cycle"? Anyone? Best guess? If we see no increased level of adaptability at the central bank, I will be using December/early January rallies to raise cash, because they are going to kill this expansion. Right now, from a trader's perspective, it is still okay to play the overbought/oversold game, but to quote my young friend Arthur Cashin... stay nimble.

Now, to be clear. I am not one to shy away from trading growth type names. I have long been an Amazon (AMZN) shareholder, and have been in and out of both Alphabet (GOOGL) , and Netflix (NFLX) often over the years. I don't remember, however... ever having a long position in Facebook (FB) . A quick search of my accounts confirmed that fact, though apparently I have been short the name going way back and have often played the firm's earnings releases through the options market. Facebook will report their third quarter after the closing bell on Tuesday, October 30th.

Consensus expectations are for EPS of $1.47 on revenue of $13.8 billion-ish. That revenue number would be good enough for 33.5% year over year growth. despite the firm's warnings in the wake of the July earnings call. The firm also warned at that time on rising expenses. Now, operating margins have been in the mid 40%'s, while gross profit margins, though in recent decline, were still up in the 90%'s. That said, I think these margins will be the focus in two weeks more than anything else.

News made the rounds yesterday that the state treasurers of Rhode Island, Illinois, and Pennsylvania had teamed up with the comptroller of New York City to side with a proposal filed back in June by Trillium Asset Management requesting that the firm make independent the role of the chair from that of the chief executive. Though, this firm has stumbled badly through a number of very publicly embarrassing events this year, the facts are that this proposal will go to a shareholder vote in the spring, and that Mark Zuckerberg controls 59.9% of the vote. So, the two roles only will be divided if Zuckerberg feels like it. Nuff said. 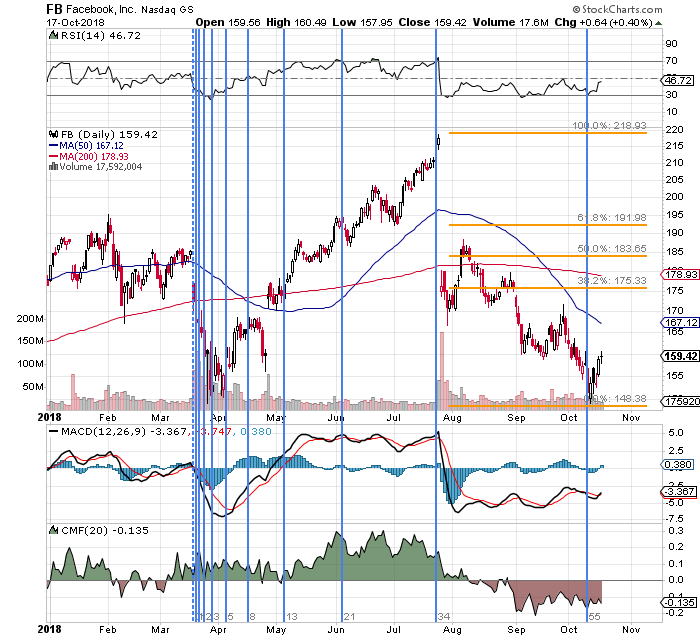 FYI, I screw around with charts all the time. 99% of my charts are never made public. That said, I was messing around with Facebook last night,, and whoa... something I thought that I would bring to your attention frankly, because I know a lot of my readers trade this name.

We all think we know that the FANG names often trade together. Not true at all. Year to date, Netflix is now up 80%, Amazon has returned 55%, Alphabet, a mere 7%, and Facebook has looked like a rented mule running against thoroughbreds at -10%. For those, who include the double "A" in their acronym, Apple (AAPL) has run 30% this year.

Now, this is simple. Take a look at the obvious double bottom on Facebook's year to date chart. The Chaikin Money Flow remains awful, but Relative Strength is looking better, and within the daily MACD, the nine day EMA has turned positive while the 12 day EMA has crossed over the 26 day EMA. (This might be seen as bullish.)

Now, look at the Fibonacci Time Sequence. If you line this thing up with the major selloff in March, it times nearly perfectly with the major selloff in late July. This sequence also indicates that the recent bottom may have been a major turning point as well. My thought is that if long these shares, a trader has a serious chance at selling them at $175, which would be a 38.2% retracement of the top to bottom July through October move.

A trader coming into earnings season flat FB could...

For my novice options traders, this is a simple strategy known as "Bull Call Spread." Basically, this is a method used to bet on an upward move in an equity, but in a way that greatly reduces the capital risk. The sale of the higher priced call limits the potential profit if the stock does rise above that strike price, but also helps subsidize the loss should the direction of this gamble fail.