Union Pacific Corp. (UNP) was last reviewed back in May, and we summed up our advice this way: "UNP might trade sideways for a while further but I would look for the uptrend to resume before too long. Traders could go long near $110 risking a close below $106 and then add to longs on a close above $115. The $150-$160 area is our price objective in the next few months."

Unfortunately our forecast was only partially correct. Prices did trade sideways until the middle of July and then closed below $106, which would have resulted in a modest loss from our suggested entry at $110. The decline or setback did not end until buyers came in around $102. Prices rallied to a slight new high by late September but have turned lower this month.

So here we are at another crossroad in the charts and indicators. Let's see what kind of signs we can find up ahead.

The daily On-Balance-Volume (OBV) line shows a peak in September suggesting that sellers of UNP have been more aggressive in recent weeks. The Moving Average Convergence Divergence (MACD) oscillator peaked with prices in late September and generated a take profits sell signal.

In this weekly bar chart of UNP, above, we can see that prices in the last four months have swung below and above and back down to the rising 40-week moving average line. The level of volume or turnover has declined all year.

The weekly OBV line was neutral from January until August when it dipped slightly before moving up to a new high. The weekly MACD oscillator is above the zero line but narrowing toward a possible bearish crossover. 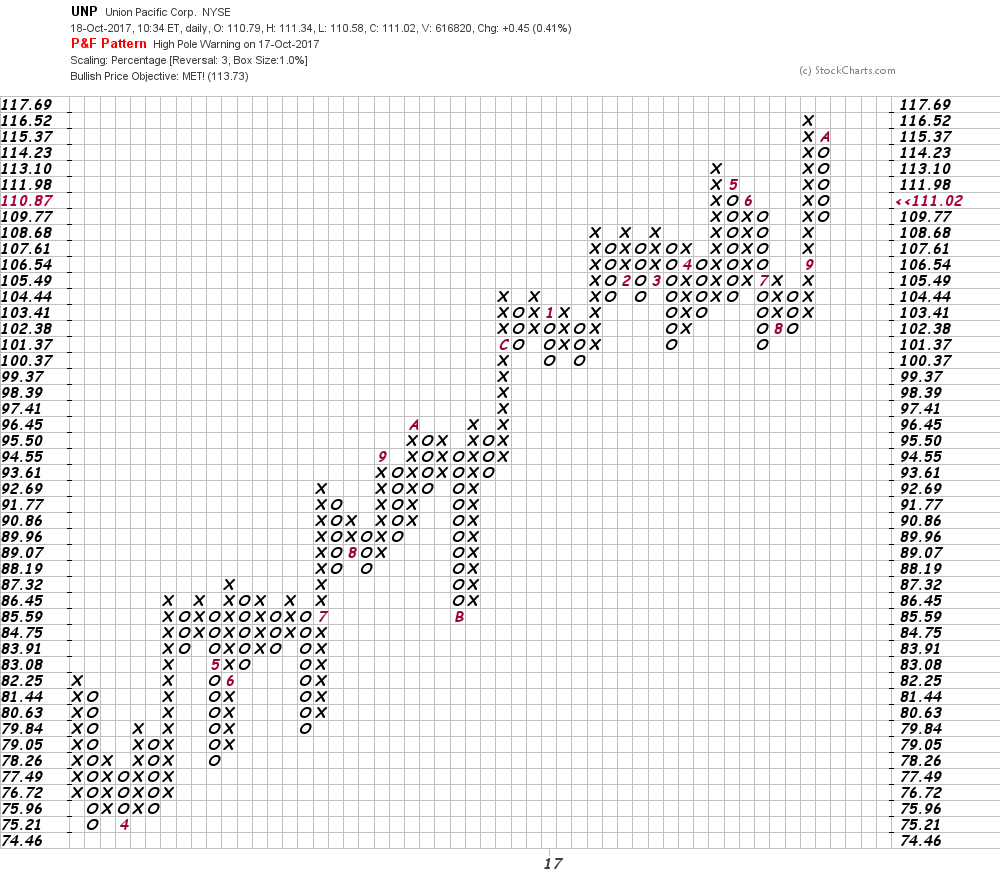 In this Point and Figure chart of UNP, above, we have a mix of information. Prices are in an uptrend but they have also met a longer-term price target near $114. Prices could decline to the $106-$104 area without breaking significantly lower but a rally to $117.69 is needed to refresh the uptrend.

Bottom line: UNP has not made much if any sustained upside progress since February when it traded around $110. With mixed technical signals on UNP now, I expect we'll see more sideways movement.

Get an email alert each time I write an article for Real Money. Click the "+Follow" next to my byline to this article.
TAGS: Investing | U.S. Equity | Transportation | How-to

Technically, FedEx Is a Buy Here But I'm Not Feeling It

I'm downgrading FDX to a 'sell' and plan to exit the name.

Keep on Truckin' with Knight-Swift Transportation

When I first wrote about KNX it was under $44 -- look where it is now and what appears down the road for investors.

AutoNation's Charts Are Bullish: Who Knew Used Cars Would Be So Strong?

On the upside, here's the area for our first price target.

According to Uber's CEO, U.S. volumes over the past week were the highest since March.