The macro was solid. I really do not think that I have ever heard so much made of the monthly JOLTs report in my life. In fact, in another time, much was made of how the JOLTs report did not accurately measure labor conditions, as there was a huge disconnect between the skill sets possessed by the supply side of that market and the skills required by the demand side. Obviously, that no longer matters.

As I told you in Tuesday's note, the "take 'em" boys had ridden into town. For those who may have spent a lifetime doing something else occupationally, the "take 'em" boys, though not actual individuals, were a real concept on trading floors in the days of auction markets, and the term was used to describe the shift in sentiment seen at short-term market bottoms.

All eleven sectors roared -- led by Information Technology, and Information Technology itself was led by the cloud and the semiconductors. If only someone had mentioned that at last weekend's Cramer Teach-In event. While it does take some nerve, it really does not take a ton of cognitive ability for an experienced trader to step in and buy oversold conditions and then conversely sell overbought conditions.

I told you last week that I was buying several names near the lows, among them, the "Cloud King" Adobe Systems (ADBE) . Yesterday morning, I had placed a $260 price target on that stock. Incredibly that level was reached later in the day. I have been asked what I did in response.

You all know my rules by now, discipline demands that something be done when self-designated levels are reached. I sold 20% of my ADBE long late in the day. I hung onto 80% of my equity stake, and remain short now well out of the put options. My price target moves to $275, and I will not even sell the entirety of the balance there. That said, should profit takers pressure this name on Wednesday or later this week, I am likely to buy back the shares that I sold yesterday, merely extracting some capital and leaving my position size where I originally intended it to be.

The environment remains dangerous, gang. No. we are not out of the woods fiscally, nor monetarily. That is simple fact. What is also fact is that the first round of earnings is (for the most part) going well, and corporate performance will always come first in equity valuation. Newly minted San Francisco Fed district president Mary Daly made her first public appearance Tuesday night. San Francisco is a 2018 voting member of the FOMC this year, meaning that Daly will impact the probability of another rate hike in December, then lose her voting status until 2021. She played it close to the vest in that speech, but in my opinion sounded like her thinking was in line with the committee's current trajectory for interest rate policy. Right now, futures markets in Chicago are pricing in a 75% probability of that last 2018 short-term rate hike.

Keep Your Eye On This

Almost beneath the radar, on Tuesday, the SEC ruled that the New York Stock Exchange and Nasdaq had not justified increased fees for the selling of their market data, particularly their depth of book. According to the Financial Times, Nasdaq has already made plain their intent to appeal the ruling, while the Wall Street Journal reported that a spokesperson from the NYSE had mentioned "regulatory overreach," also doubting that this ruling would withstand a challenge to be made by the exchange.

What this means to us? As traders, our commissions have contracted over the years as humans have been removed from the industry, but these fees certainly do pressure margins at various broker-dealers. In fact, last December, 24 firms, including many of these "brokers," signed a letter complaining about these price increases to the SEC. My thought is that for us -- the end user of both brokerage services and market data -- in this competitive era, we won't see commissions increase in the near-term future, but we may see an impact in the quality of information available at that price.

I know most of you saw the overnight pop in the share price of Netflix (NFLX) . The shares are about 12% higher than where they traded as Tuesday night's closing bell chimed. Plenty to get excited about. Third-quarter EPS beat expectations by $0.21. The firm added 1.09 million new domestic subscribers as well as 5.87 million internationally, for total new subscriber-ship of nearly 7 million accounts. This beats prior guidance of a rough 5.3 million.

The firm's operating margin improved from 11.8% to 12%. Revenue did increase 33.8% year over year, but that was right on consensus and not considered a beat. The subscriber growth is the big deal here, and for NFLX investors, this is what matters most. That is what was most harmful to these shares in the wake of their second-quarter earnings release.

My take is this. The firm's guidance for the fourth quarter is more troubling to me than it seems to be for other traders. Yes, the firm forecasts the addition of 9.4 million new subscribers globally, which is above industry estimates. But the firm guided Q4 EPS of around $0.23 on revenue of $4.2 billion. Both of those numbers are below broader industry consensus.

Furthermore, Netflix last night admitted that some of this Q3 earnings beat was attributable to the firm pushing a portion of its marketing costs out into the next quarter. Hmm. The firm also anticipates that free cash flow will end the year at -$3 billion, despite the fact that year to date, that number is -$1.7 billion. Must be some quarter coming up. Yikes. This firm also states that they see no significant improvement in free cash flow for fiscal 2019.

I don't know, but wow. I am getting the itch to short this thing. You know, now this is just my opinion, but the quality of the programming seems to be getting tougher to duplicate. I still like some of the product, but I watch Netflix myself less and less.

Family members in my home watch Hulu, Amazon Prime, and YouTube Red more than they watch Netflix. That programming that I am not watching is expensive to create and maintain. Market-share is key, and Disney (DIS) , Amazon (AMZN) , AT&T (T) , Alphabet (GOOGL) , and Walmart (WMT) all intend to take a bite. How long can Netflix compete with the likes of those firms, all of whom run revenue driving businesses away from this space that would allow them to experience less pains while taking market-share at a loss? Good question. Hard to answer. 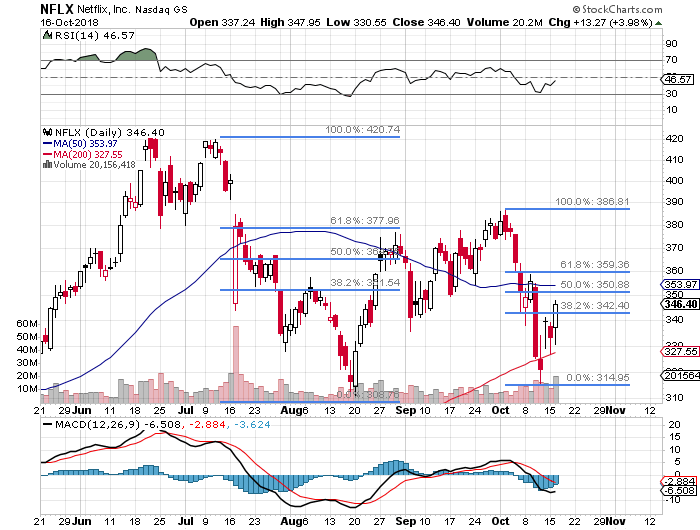 Okay, gang... fundamental analysis is not going to do much good when analyzing a name priced for fantastic growth. Current liabilities combined with long-term debt simply dwarf cash on hand -- and that cash on hand is down significantly from the Q2 balance sheet to the Q3 balance sheet.

That does not matter this morning, but I think it should and I think it will. This stock may trade close to a 100% retracement of the October selloff this morning. I will be somewhere above that level waiting to set up a small entry level short position. I will not be too aggressive. I understand that the name has a cult following. At least, only a rough 4% of the float is held short, so this will not be a crowded trade. If I get chicken, I'll buy an out-of-the-money put option. Bok bok.

In all honesty, I want you, the reader, to understand that I have often played NFLX from the short side, and my record on those trades is inconsistent. I have had some nice wins, and I've had only one loss, but it was a doozy.

Get an email alert each time I write an article for Real Money. Click the "+Follow" next to my byline to this article.
TAGS: Investing | Global Equity | Regulation | Markets | Financial Services | Technology | Economic Data | Earnings | Economy | Entertainment | Newsletter | Politics