The most surprising aspect of the Tuesday rally -- at least for me -- was that the put/call ratio was 103% even at the end of the day. That tells me the acceptance of the rally was not there.

I heard complaints about the volume. Volume has always increased on down moves and lightened up on up moves. It's been that way for years. And to call Tuesday's volume light seems incorrect to me. Here is a chart of Nasdaq with volume. Does that look like light volume to you? It was higher than Monday's down day and pretty much in line with the last two weeks. 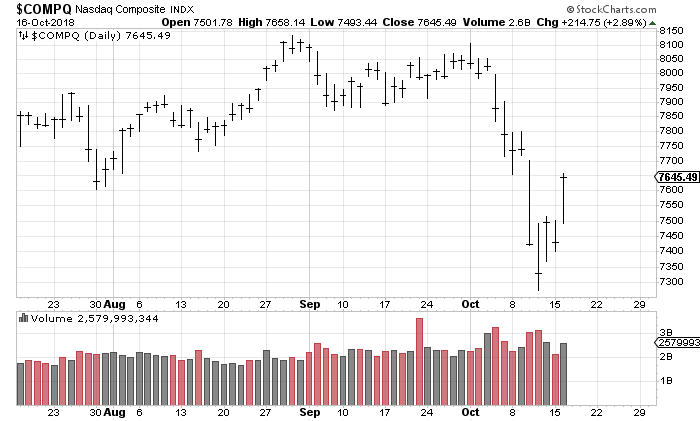 Another complaint was the banks didn't participate. They didn't. The banks have been awful for weeks now. But one thing has changed. Weeks ago everyone loved them. Can you remember the last time you heard someone on television recommending the banks? They wouldn't dare. Yet Bank Index was red in the morning and reversed late in the day to close near the highs.  I think the Banks deserve an oversold rally.

There were other complaints too but let's remember we're oversold. That doesn't change just because we rallied one day. It's still too far away to peg closely but the Oscillator looks as though it won't get overbought until around Friday, October 26.

This doesn't mean we will rally every single day between now and then but it means the momentum is with the upside while we're still oversold.

The Hi-Lo Indicator only just fell under 15% late last week. Nasdaq's only did so this week. The NYSE is now at 8% and Nasdaq is at 11%. That's still oversold.

Breadth was the best we've seen in about 18 months. In fact, the McClellan Summation Index which has been in a downtrend for months, but most notably fell off a cliff six weeks ago needed a net differential of +2,600 advancers minus decliners to reverse as of Tuesday morning. It now only needs +300. That is within reach.

The 10-day moving average of the put/call ratio has finally pushed itself up into higher ground. It has not yet rolled over. I still expect it will do so later this week.

Finally I would point out that the day started out with the small caps lagging but at the end of the day they had outperformed for the second day in a row. We haven't seen a move like that in the ratio since mid-August. But in mid August the ratio wasn't at the bottom of the range. Now it is.

The charts still look bad. But as I have said bad charts turn good and good charts turn bad. I doubt we'll see a rally every single day but we're still oversold so the declines should give us another rally attempt.

I'm Not Chasing Johnson & Johnson but Here's How I'd Trade It

If one is already long, do today's earnings provoke a sale? Not in my opinion, but do they provoke a purchase?