During last night's "Mad Money" program, Jim Cramer said that the only negative Tuesday was International Business Machines (IBM) , a disappointment that's becoming all too common for the tech giant, he noted.

IBM was trading lower early Wednesday morning. It has been struggling to mount a sustained advance so a quick review of the charts should tell us to continue to avoid this Dow Industrials icon.

In this daily bar chart, below, we do not have Wedneasday trading. Use your imagination and visualize IBM around $137 - a new low for the recent move down and perhaps we will see a new 52-week low being established.

Prices are below the declining 50-day moving average line as well as the bearish 200-day line.

The daily On-Balance-Volume (OBV) line did show a rise from early June to late September but it turned lower ahead of yesterday's earnings release.

The daily Moving Average Convergence Divergence (MACD) oscillator is also bearish having turned down in early October and recently moving below the zero line for an outright sell signal.

In this weekly bar chart of IBM, below, we can see that the price of IBM has been weakening since early 2017. Every time prices reach the $140 area support has developed but this time we run the risk of this support zone being broken. Prices are below the declining 40-week moving average line.

The weekly OBV line has been in a downtrend for nearly three years and the MACD oscillator is turning down from below the zero line for a fresh outright sell signal. 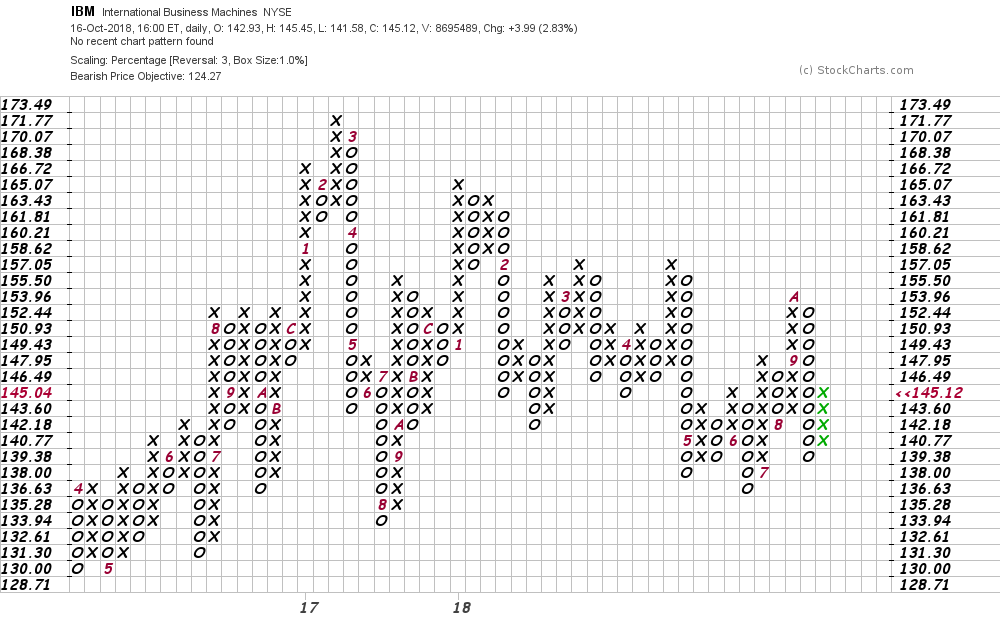 Bottom line strategy: All three of our charts and their indicators are bearish. Analysts and investors may be anxious for a turnaround in Big Blue's fortunes but at this juncture it does not seem likely. A new low close below $138 could precipitate further declines. $124 is our Point and Figure price target.