The Most Dangerous of Games

I have made some show of asking the Fed Chair Jerome Powell to either ease the pace of short-term rate hikes, or slow down on the management of the balance sheet. I have seen some signs of coming economic fragility for quite some time, particularly in areas where consumers need to access the use of credit in order to support growth. Cracks in housing and autos had been apparent for a few months. Then came weakness across the retail landscape.

Unless one intentionally keeps themselves from having to tap the intellectual side of their brain, then they noticed the Federal government's monthly budget statement for September. For the month, the Fed enjoyed a surplus more than $40 billion greater than had been expected. This "held" the deficit for fiscal 2018 (The federal fiscal year ends with September) to $779 billion.

I want you to understand this, because the danger ahead will be easy to blame on Jerome Powell, but will certainly not be all the fault of the FOMC. While those at that committee truly appear unable to recognize a more-difficult road ahead, they did not build that particular road.

Fortunately, the fiscal stimulus experienced over the past year has truly produced some standout headline economic data, some of which we honestly never thought we would see again after a decade of economic malaise. Unfortunately, unlike during other economic eras where growth had broken out, the deficit between federal spending and federal revenue is not contracting. In fact, on top of what was 17% expansion in this space from FY 2017 to FY 2018, will be an acceleration of this widening deficit for FY 2019. The number is expected to exceed $1 trillion.

What This Does To You

What this sizable increase in the federal deficit does is also increase, quite rapidly, the necessity for the U.S. Treasury to borrow much more money than previously thought in order to fund itself. This comes, my friends, as the U.S. Treasury's largest investors (the Fed and China) have, for different reasons, taken a proverbial hike. You do understand that unless these buyers return to the marketplace, or some other white knight fills the void, the long end of the curve will trade where the bond market prices credit risk, right? Our problem with the Fed is simply that they are reacting to this changing game before the long end moves significantly enough to do so safely.

Our problem with the fiscal situation is quite simply that this is unsustainable. Either the tax cuts implemented last year have to produce much greater revenue from household income, corporate taxes and capital gains in aggregate, or federal spending must be reduced significantly. This situation is akin to playing with fire. If left unabated, confidence will eventually soften in the perceived safety of U.S. government debt  --and then the U.S. dollar itself.

These are not maybes. We'll live in the environment provided, because timing these things is impossible -- and because things do have a way of correcting themselves before the genie leaves the bottle. That said, it is my honest conviction that the good people of the neighborhood do need to have some hard assets in their portfolios -- land, gold, maybe art. This is a level of diversification that many retail investors will ignore at their own peril. If you don't understand, ask. There are no stupid questions.

Aside from diversifying into hard assets, one could also simply follow the money. I wrote to you on this topic at TheStreet yesterday afternoon. Defense is where this administration likes to spend money. Defense is where this administration likes to pressure client states to spend money. Use that knowledge -- be invested where you know unchecked capital will be spent. No promises, but you all know that's what I do.

That said -- three cheers for Jeff Bezos, who, as CEO at Amazon (AMZN) , in my opinion is about ten thousand times smarter than the guys running Alphabet (GOOGL) . You may recall that a few days back, Alphabet or Google had made a public show of pulling out of the bidding for that often mentioned $10 billion Pentagon cloud computing contract. While firms such as Amazon, Microsoft (MSFT) , IBM (IBM) and others wrestle over this deal, Alphabet has made clear that at least in part, it would walk away because this type of work might cross with the guidelines set by the firm for the use of artificial intelligence.

Bezos made his opinion on the matter clear. According to the Financial Times, on Monday he said " If big tech companies are going to turn their back on the Department of Defense, this country is in trouble." FYI, I sold my long position in GOOGL when the firm failed to appear before congress in very early September. I doubled my Amazon long toward the lows last week. That's how I feel about these two names. My FANG portfolio has only had an "A" ever since, and has never had an "F".

Netflix (NFLX) will make the big splash tonight. Expectations for the firm's third quarter performance are for EPS of $0.68 on revenue of roughly $4 billion. Financial media will focus on NFLX, and the stock will react, probably with some violence, but not to Q3 expectations. It will be subscriber growth, ad sales and guidance that either lifts this name from the lower end of its six month range, or it smashes through what has been support. I gave you an options play based on this earnings release last Friday. One would need to adjust price levels if still interested.

For folks planning to play the tech space going forward, the real directional news tonight won't be coming from NFLX, but will be found in the earnings released by Lam Reseach (LRCX) and the associated post-earnings call. This is where you will find how "bust" the boom/bust cycle for the semiconductor space is, and this call is a must-listen. The firm's CEO Martin Anstice is one of the few people whose calls that I think even people who do not make a habit of listening to earnings calls should go out of their way to listen to. In my opinion, Anstice comes with a Paal Kibsgaard-like ( (SLB) CEO) reputation for frankness. If that's not who Anstice is, then he sure has me fooled.

While the band of fools (algorithmic traders) was out and about on Monday afternoon, puking their cloud computing long positions, and overshooting as usual -- like a bunch of amateurs -- leadership at Adobe (ADBE) was busy prepping for their MAX Conference in Los Angeles, California. The firm would present -- in a limited way -- their new tool for digital artists, Project Aero AR, along with updated versions of many already popular applications such as Premiere Rush, Project Gemini, and Photoshop.

The toys are nice. I am sure somebody smarter than me will cover them in detail for you. I like numbers -- and after the close, Adobe dished some of those out as well. No, the firm does not report again until December. What they did do last night, was reaffirm to us shareholders that the firm was close enough to consensus on EPS and revenue guidance for the fourth quarter that investors could breathe a sigh of relief. Huzzah! But wait... it gets better.

The firm also provided preliminary growth targets for fiscal year 2019. This is straight from the press release, gang. ADBE expects to see in FY 2019:

These tender morsels, according to the firm, will add up to 20% y/y revenue growth. Period. Who's that coming over the hill? Whoa Nelly.. The take 'em boys are here. I love those guys. The stock that sold off 4.4% yesterday is up 5.9% here at zero dark thirty. Just sayin'.

Last Friday night, in preparation for the big Cramer Teach-In in New York City, I stayed up into the wee hours. I threw out and redrew target prices and panic points for 65 stocks, which covers the lion's share of my long positions. Adobe was one of those names. 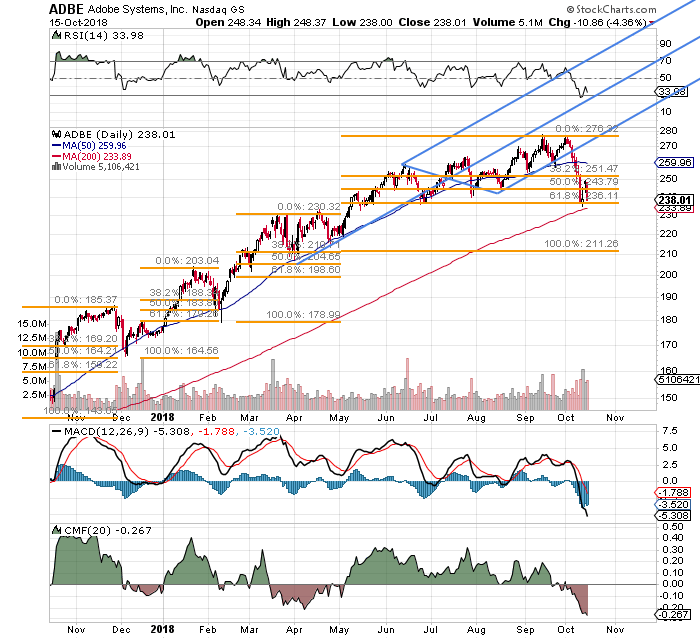 One is quickly drawn to the broken Pitchfork. The cloud is littered with these broken formations by the way. However, one also sees how support showed up in the same spot at the same time in the form of a 61.8% Fibonacci retracement, and the 200-day SMA. The daily MACD, Relative Strength, and Money Flow will all improve aesthetically with the ringing of the opening bell at 9:30 a.m. ET.

Do I need to regain the lower trend-line of that Pitchfork model? No. That's trash now. Besides, this is also a name that I added to late last week. I will take something off way before that spot is regained, anyway.

My Targets for Adobe

Get an email alert each time I write an article for Real Money. Click the "+Follow" next to my byline to this article.
TAGS: Investing | Global Equity | Technology | Economic Data | Earnings | Economy | Newsletter | Politics