Tomorrow is the big day north of the border. October 17th, 2018, Canada becomes the first major economy to legalize the recreational use of cannabis. Ahead of this landmark event, stocks labeled as Cannabis stocks have been quite volatile. To understand this business, one must understand that this is really not just one business. There are the firms that grow and produce the plant. There are firms that will market the recreational user, and other that target only medical use. Then there are the large, multinational corporations that have either sought or consummated deals within the space to produce beverages, or other consumables to infuse either THC or CBD into newly developed products.

In my opinion, and likely in the opinion of many, Canopy Growth (CGC) is best in class in the pot space. One huge reason would be the $4B investment made by Constellation Brands (STZ) in this name back in August. It was at that time that the maker of Corona and Modelo beers increased their stake in Canopy from 9% to 38% of the firm. At the time, Constellation Growth chief Bruce Linton mentioned the eventual development of cannabis infused beverages and sleep aids.

There are several other major players in this space that the retail investor needs to be cognizant of. Those names would be Aphria (APHQF) , Aurora Cannabis (ACBFF) , Cronos Group (CRON) , GW Pharma (GWPH) , and the now infamous Tilray (TLRY) . I say infamous because TLRY, since August, has been more known for the extreme volatility in the share price that put noted short seller Andrew Left in the spotlight than for anything else.

Of those majors, there have been recent rumors putting Aphria together with tobacco grower Altria (MO) for a possible minority investment, and there have been other co-developer type rumors in that past concerning Aurora and Coca-Cola (KO) that appear to have not turned into hard news. Aurora also has been in the news of late as the firm is set to re-domicile their U.S. listing to the New York Stock Exchange. This should give this name, a name that has battled the forces of dilution in the past, a higher profile, and better accessibility for investors. This is also the name, that I have the most experience with. As co-manager of the "Stocks Under $10" portfolio here at TheStreet, we have been long this name twice and have made money twice. Currently flat, should the name, on a dip return to a level permitted by our portfolio to enter into a new long position, we would be very interested.

Many of you may recall that the state of California legalized the recreational use of cannabis back on January 1st this year. All of the cannabis stocks rallied into that event much as they have into tomorrow. I feel it more than likely that the industry experiences something similar in the wake of what happens in Canada tomorrow. That something similar was a selloff that lasted. Many of these names did not recover their January levels for another six to eight months. For those of you who have already enjoyed a nice run, I might take a little something off, and protect those profits.

For those flat, who want to be involved, there are in my opinion, three ways to go. Best in class (CGC). Less downside with a short-term supportive catalyst (ACBFF), and for those who just want some exposure without doing all the homework, there are ETFs. The one that actually has trades in respectable volumes would be the ETFMG Alternative Harvest ETF (MJ) . 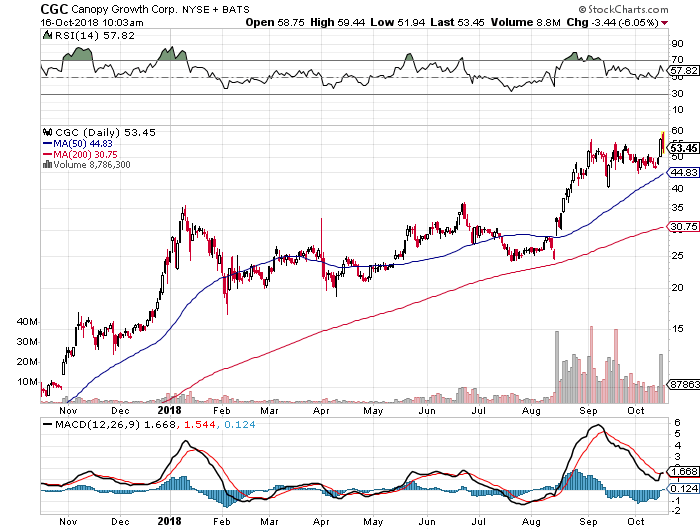 Canopy has already traded in an $8 range today, making this a dangerous day to get involved. Given that $45 support has passed three tests since early September, I would rather wait, or sell a $45 November 16th put than buy the equity this morning. Then again, I am all about risk management. It's what I do.