Advanced Micro Devices Inc. (AMD) made a very strong rally from April to September and now we are seeing a pullback/correction unfold. AMD more than tripled from the April nadir in just six months -- pretty impressive even for this bull market. Prices stalled in the $32-$34 area in September and turned lower this month. Have prices retraced or corrected enough, or is there more weakness ahead? Let's review a few charts.

In this daily bar chart of AMD, below, we can see a short-term decline this month. Prices are testing the rising 50-day moving average line, which should crest soon. The daily On-Balance-Volume (OBV) line shows a peak in early September and a decline, so far, to the middle of October. A declining OBV line happens when the trading volume is heavier on days when the stock closes lower. This is a sign that sellers are aggressive and they want to get out of earlier longs. The trend-following Moving Average Convergence Divergence (MACD) oscillator is moving below the zero line for an outright sell signal.

In this daily candlestick chart of AMD, below, we can see the decline a little differently. There is a spinning top pattern on Friday and a doji pattern on Monday. These two candles could mark a reversal, but we have yet to see any confirmation. Another point about candles is that a reversal under this technique can mean a shift from down to sideways. A turn to the upside is not required or expected.

In this weekly bar chart of AMD, below, we can see a long consolidation pattern in the $10-$15 area followed by the big rally. Prices are above the rising 40-week moving average line -- perhaps too far above it. The weekly OBV line has declined the past month and the MACD oscillator on this longer time frame is narrowing toward a potential take-profits sell signal.

In this Point and Figure chart of AMD, below, we can see two interesting points. The first is that AMD has reached a downside price target and the second is that a decline to $24.43 would be a new low and could precipitate further weakness. 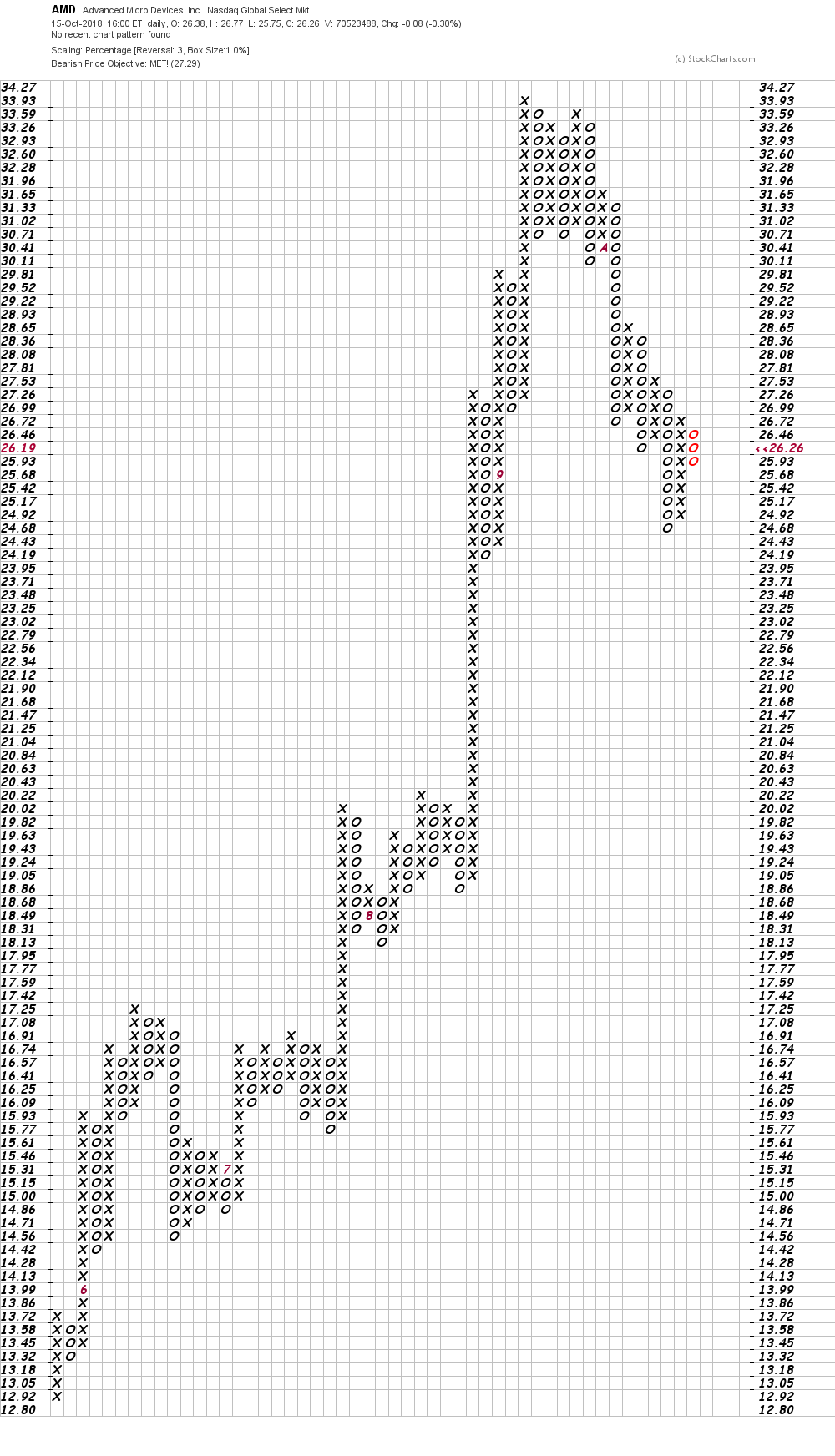 Bottom line strategy: The big  question is whether AMD has corrected this year's rally. Is this the time and place to return to the long side? Prices have corrected about one-third of the rally, so the answer is a definite "maybe." I want to see some further testing of the $26-$24 area before recommending a long position.

I'm Willing to Take a Shot Here With ContextLogic

WISH has a setup to possibly push back to its recent highs.

Jim Cramer: Here's Why Amazon Is a Stock I Could See Buying

The imbalances that have hurt us so much are beginning to take care of themselves.

It's Not Too Late to Get Long or Re-Enter Adobe

The trick is doing so intelligently.