Why This Is Hard

Pricing merchandise in a changing environment is obviously tricky. The undercurrent of questions that I received from retail investors as I came off of the stage at the Cramer Boot Camp for Investors event in New York City on Saturday centered on this uncertainty. The reality is that folks must understand that stock prices are the result of supply and demand.

That supply and demand model is formed in two ways. Through technical analysis, which measures patterns left by past market behavior, and through fundamental analysis, which is the measure of corporate results. Both are actually lagging indicators that are tools used in projecting a best guess at future performance. One who only adheres to the one type of analysis without properly respecting the other does so at his or her own peril.

What controls the inputs that must be used in order to properly analyze financial markets? Macroeconomics is where the rubber meets the road. This is the very lab for all of our experiments. In other words, without the macro, you don't have a ball game. It is imperative that observers understand that economics is not science. Some might tell you different, but economics is simply the measure of human response against conditions of surplus and scarcity. That's it. Policy, both monetary and fiscal, are nothing more than the artificial creation of false versions of these conditions in order to attempt to fabricate a desired result in that human response. Sorry, economists, this makes you an artist, not a scientist, and most of you are darned lousy at understanding human response.

Life Is Just a Fantasy

Unfortunately, from my point of view (though yours may differ) those conditions of artificial surplus and scarcity have been with us to an ever-increasing degree since the creation of central banking, and in some measure since the first municipality got the idea of taxing its citizens. Long gone are the days when the hunter could trade with the farmer to both of their satisfaction without interference. None of us remember the true purity of the free market. By the way, this attempted manufacturing of artificially created results has become more and more glaring since the creation of 100% fiat currency. That said, the overbearing input from central banks over the past 30 or 40 years -- and in particular, in this current millennium -- has completely blurred proper price discovery and risk assessment.

Now, remember that the true free market can only exist in a laboratory condition, free from all impacts created through policy. You and I cannot fix this. Even as the central bank moves towards a "normalization" that they can truly never approach without forcing another crisis, fiscal (budgetary) policy at the household, municipal, Federal and global levels remains on an unsustainable course. What this does, folks, is pull forward performance. There is still a piper to pay, and politics does not reward the politician who is realistic about correcting these inputs. That said, we will go through periods of increased volatility until there is an eventual reset of the economy at a lower base.

That said, our domestic economy is performing well on the surface. There are clearly sources of fragility easily seen by anyone not blinded by political bias. We don't panic. We must live in the environment provided. We adapt to and overcome all obstacles to our success. We'll take nothing for granted. Finally, we understand that there may be a day out there when the ball rolls uphill because the ball is no longer a ball, and the hill is no longer a hill.

The good news was (some thought) that the 200-day simple moving average held, or in reality was regained on Friday by the S&P 500, the Dow Jones Industrial Average, the Nasdaq Composite -- and most importantly for now, the Technology Select SPDR Fund (XLK) . In my opinion, a somewhat false importance was placed on this technical level over the weekend, simply because that was where the bus had stopped.

The truth is the equity index futures are considerably lower in the wake of a poor session in Asia, and these levels only matter if the folks who write the algorithms think they matter. That's all. Many other sectors underperformed by a considerable margin, and the small-caps are testing the 400-day SMA this morning. The 400-day? Yeah, folks reaching for answers can find anything they're looking for. Trust me, nobody looks at the 400-day, but if that's where the bus stops today, somebody will pretend that they have been watching this level all along.

How about these guys? One, two, three, but then there's still this...

2) Vice President Michael Pence's tough-sounding stance on the trade conflict with China balanced against plans made for the two presidents to meet in November.

3) The IMF cut forward-looking growth forecasts last week, but then sounded optimistic on trade this past weekend, in large part thanks to the U.S. deal with Canada and Mexico, the delay in placing auto tariffs on the EU, a free-trade deal with South Korea and the planning of future talks with Japan.

4) PPG Industries (PPG)  cited margin pressures ahead of earnings. This is what really kicked off all of this nervousness. It is this pressure induced by higher material costs, higher labor costs, higher interest expense, and tariffs that force up overhead that will be measured against both demand, and pricing ability. Yes, demand. That may be a thing. We'll see.

We have, over the last few days, discussed several ideas on best defending oneself in a falling market. We have talked over defensive names -- and physical gold. What every equity investor should also always have at the ready are a list of stocks that the investor or trader missed entirely, or did not get enough of. Then when these stocks that the trader already knows that he or she likes either do go on sale, or present as opportunity... we act.

PPG is going to report this Thursday. They have already told us that there is a good chance that they spit the bit. What do these guys do? Among other things, they manufacture automotive coatings and finishes. Their customers are pretty much all of the auto makers. Now, if demand is not there for what these guys sell, does that mean that people have stopped, or will stop driving? Of course not. They are going to buy used, and they are going to repair what they already have in a past-peak autos world.

By the way, you kids notice O'Reilly Automotive (ORLY) ? They report next Wednesday, nine days from now.

For those unfamiliar, this firm sells after-market auto parts and automotive tools. Their customers are the kid fixing his own car in the driveway next door, as well as the business that you left your car at this morning. 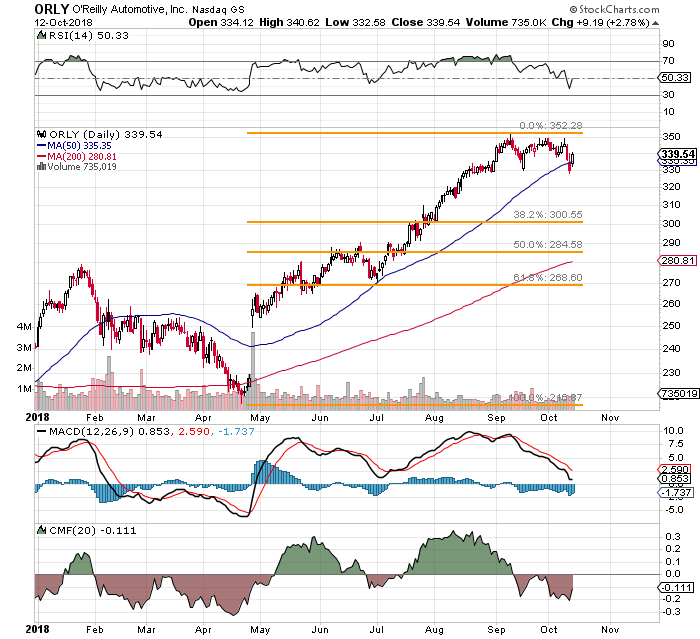 Why am I showing you this? While the rest of our equity marketplace, for the most part is trying to hang on to their various 200-day SMA's. ORLY is still clinging to it's 50-day SMA. The other auto-parts dealers? Advance Auto Parts (AAP) , and AutoZone (AZO) are both also hanging around the 50-day, but AZO is even less affordable for retail investors. ORLY is the only one of the three that has seen four consecutive quarters of increased fund ownership, and the only one of the three that retains 3% ownership by management. I like to see funds on the bid side, and I like it when management has skin in the game.

Still, this is an expensive name with a ton of debt that remains heavily reliant upon inventories that can be sold at or near where they should be in order to keep the liquidity wolf at bay. This is why I do not consider this an equity play. However, there should be some Fibonacci support close to the $300 level, and then more at $284. The 200-day SMA currently comes into play at $280.

A Trade on O'Reilly Automotive

This is simply a premium capture play, but the trader must be prepared mentally to have to purchase the shares at the strike price in the event of a more-significant correction by mid-November. That means either sufficient cash, or available margin, or simply buying back the put ahead of expiration if necessary.

The trade-off for the reduction in risk is the reduced benefit on an upside move by the shares, but that was not the purpose of this mission in the first place. Now, let's go have a good week.

Get an email alert each time I write an article for Real Money. Click the "+Follow" next to my byline to this article.
TAGS: Investing | Global Equity | Regulation | Markets | Economic Data | Earnings | Economy | Newsletter | Options | Politics