For his "Executive Decision" segment of "Mad Money" Thursday, Jim Cramer spoke with Andreas Fibig, chairman and CEO of International Flavors & Fragrances, which trades under the ticker symbol (IFF) . Cramer said investors should consider a company such as International Flavors & Fragrances in a volatile environment. All well and good, but let's check the charts for a couple minutes.

In this daily bar chart of IFF, below, we can see what could be a bottoming pattern from April. Use your imagination to "see" a "left shoulder" in March/April, a "head" in May/June and a "right shoulder" in September. The "neckline" could be downward sloping and drawn along the highs of late April and late September. The slope of the shorter 50-day moving average line is bullish, but the slower-to-react 200-day line is still bearish.

The daily On-Balance-Volume (OBV) line is interesting in that it bounces around from May to early September and then rises strongly to show aggressive buying. The trend-following Moving Average Convergence Divergence (MACD) oscillator moved above the zero line in July, but recently has rolled over to a take-profits sell signal.

In this weekly bar chart of IFF, below, we see a mixed picture with our favorite indicators. Prices are below the declining 40-week moving average line. The weekly OBV line peaked in late April and still has a downward bias. The MACD oscillator shows a cover-shorts buy signal in July but it is still below the zero line and a buy signal.

In this Point and Figure chart of IFF, below, we can see a modest downside price target of $126.71 being projected. A rally to $142.18 would be an upside breakout. 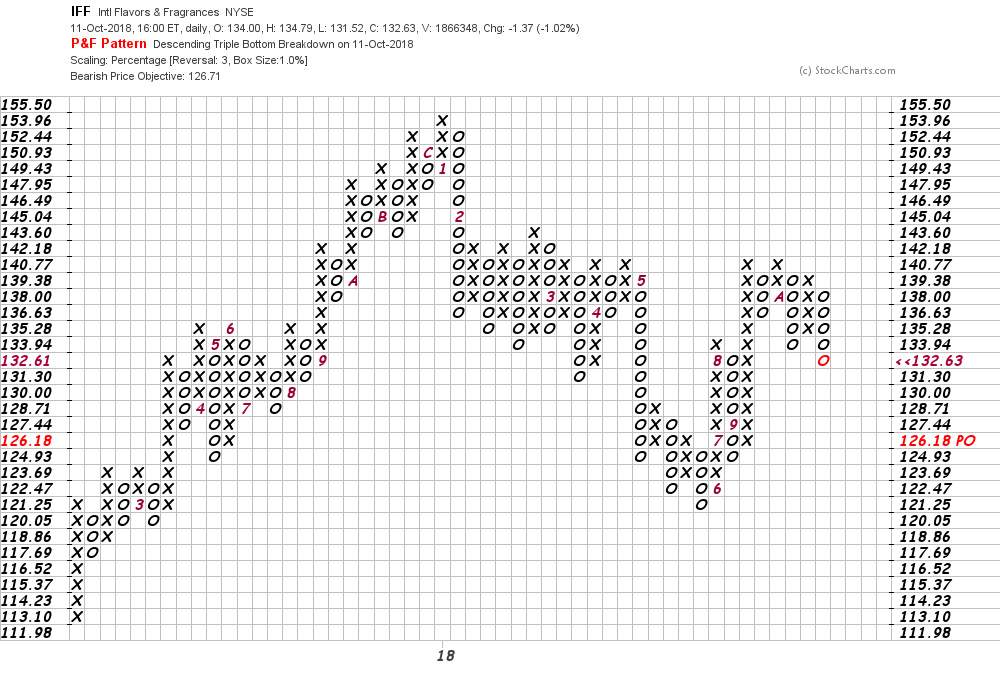 Bottom line strategy: There was a shift to buying in September for IFF. You could put it on your shopping list but wait for strength above $142.18 before buying.

Get an email alert each time I write an article for Real Money. Click the "+Follow" next to my byline to this article.
TAGS: Investing | U.S. Equity | Consumer Staples | Consumer | How-to | Mad Money | Risk Management | Stocks