Thursday was quite a different day in the market than we have seen. And the curiosity is how different folks sounded after the Wednesday close vs. the Thursday close.

On Wednesday evening everyone wanted to buy a big down opening. On Thursday evening many of those same folks told us to wait. As best I can tell the main difference is that we broke the 200-day moving average lines in all the major indexes. But it might be other things that changed their minds.

There was also a flight to safety in that bonds rallied (finally!) as did gold.

Here's what we know though. The put/call ratio went to 121% for the second day in a row. That means the 10-day moving average is finally moving up. It probably has a bit further to go but it has finally reached the level it was in June, so it is no longer "too low."

In case you are wondering, the February lows saw Nasdaq's DSI at 9 and the S&P at 10. This is on top of the American Association of Individual Investors weekly survey showing a 15 point drop in bulls, keep in mind the AAII survey didn't even include the last two days.

But let's move on to the Hi-Lo Indicator. It is now at 13%. Sure it can go lower. Heck it probably will. But under 15% and we're oversold. 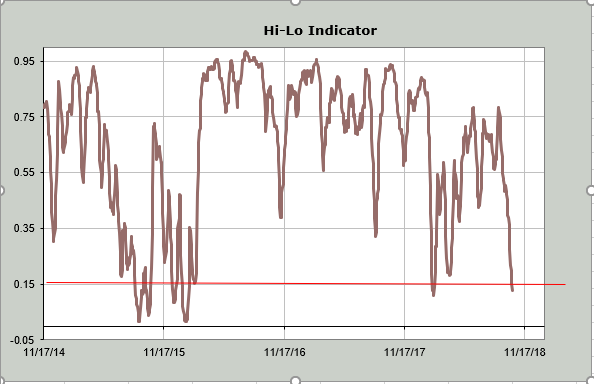 What I haven't discussed much though is Nasdaq's Hi-Lo Indicator. It has not been under 15% since January 2016. Yes, that's almost three years. It closed at 19% on Thursday. Again, due to the calculation it probably takes a few more days to get under 15% but I think we can all agree that under 15% is oversold. 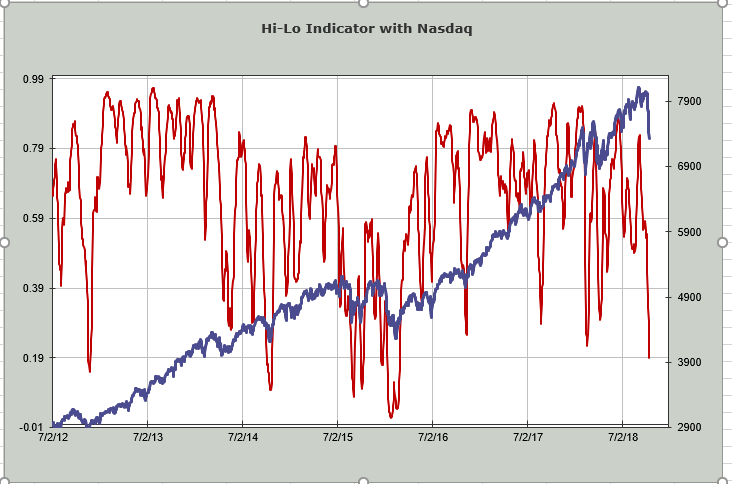 Finally let's talk about the small caps. In the last two days the Russell 2000 has outperformed the S&P. Oh sure the Russell is awful, I know. But folks thought it was great all summer when it was underperforming in a serious way. Now no one even wants to look at the small caps.

Please don't think it is my view that the market is great and I'm wearing rose colored glasses. I am not. The number of stocks making new lows is still expanding. The charts look awful. The Bank Index just made a lower low. The Semis are on the verge of making a lower low as well. The Transports are now down on the year.

But I am a believer that nothing goes in a straight line-not up or down. And with the Nasdaq Momentum Indicator into a window of oversold (between now and Tuesday) it's time for a rally.