Once Upon A Time

The phone, a very expensive model, had been smashed the into many, many pieces. My first day wearing badge number 986 on the trading floor of the New York Stock Exchange. I had made a very poor sale in American International Group (AIG) . I had been called to the phone from the crowd by my firm's lead prop trader. He accused me of "being in bed with the specialist."

I had honestly done my best. I had been schooled by a much more experienced trader. At first, I was taken aback. Then I got angry. My integrity had been questioned. Question my honor? There are consequences for that.

Knowing my job could be lost (which never really bothered me), I coldly told this "lead trader" to listen and listen good. There was a park across the street from my old firm's office. I told him that if I left on the bell, I could be in that park by 4:30 p.m.. I wasn't kidding. He said something threatening. I hung up the phone with enough force to shatter it. My hand was cut up pretty bad. That alone would impress my clerk. That was the end of it, though. We never met in the park, instead we became friends, and we ended up working quite well together.

Markets were already ugly yesterday. In fact, for equities, support had not been visible anywhere since late Tuesday. Then it got worse fast. You can see it easily on the charts. I was "miked up" for TV, with a big screen right in front of me. Starting at 2:30 p.m. ET, and culminating after 2:40 p.m., something that every trader worth his or her salt had been expecting to see for about an hour actually broke. Margin Calls!! In a flash, literally, every equity index cracked, the NYSE TICK (net aggregate last sale: plus ticks less down ticks) hit a level of negativity not seen since the "Flash Crash" of 2010.

The problem is that in 2018, algorithms race each other, and massive programs such as this race to multiple points of sale, exacerbating the market overshoot. It all happens in micro-seconds. Why micro-seconds? Because for the high-frequency crowd, milliseconds are way too slow to stay competitive.

Once upon a time, in a slower, more centralized marketplace, where orders were required to be represented openly for all players to have a fair chance at, human traders used to walk away from executing orders that they thought might just be stupid. There was incentive to avoid making a poor trade. See above. A floor trader might just feel that he or she was being taken to the cleaners, and instead of participating just because the trade would be covered by the tape, they would call the client. That client usually being a hedge or mutual fund, more times than not, they actually appreciated not "going along" like a mindless fool.

Flash forward to the present, and trades are chopped up into tiny slices. Speed is paramount. Not only do these funds not know that they are not being represented in what used to be, in my opinion, more professional price discovery, but nobody still standing even seems to care. Executing a client's order at a lousy price not only would get a floor trader screamed at in the days of a two-sided ongoing auction-style market, it would likely lose for the floor trader that client's trust.

Yes, you might say that I am an old floor broker pining away for the old days, and that I am biased in my opinion. I would say to that... yes, you are 100% correct. I have been an active trader for decades. My career has successfully spanned the eras and the change in market models. Therefore, I know that we used to do things in a better way that seemed much fairer for all.

Equity index futures responded to this forced weakness that saw U.S. equities close near enough to the lows of the session for a second awful day, by heading in a northerly direction. News had broken that the president's Economic Council Director Larry Kudlow would get his way. The White House would move ahead on the planned November summit between Presidents Xi of China, and Trump of the U.S. at the G-20 meeting in Buenos Aires.

There has been no breakthrough, but the mere fact that the two sides were willing to try again, and at the highest level, was seen by traders as a distinct positive overnight -- despite a Thursday trading session that saw broad selling for a second straight day, and which enveloped both growth and value-type names and pulled lower all eleven sectors of the S&P 500.

It did seem yesterday, yes some of us still trust instinct, that markets were feeling around for a short-term bottom. The demand for gold in Thursday's session tells me that the folks are a little more frightened than they were 24 hours earlier. That said, I trust no one, and I assume nothing. I live in the environment provided. If I am right, I will profit. If I am wrong, I will adjust.

We Come Seeking Wisdom and Value

In the era of a central bank engaged in the methodical targeting of higher interest rates, I think that one can easily call this development alarming. Blame the doubt on future growth? Blame the withdrawal of potential liquidity from the balance sheet?

Yes, everyone expects the major banks, or at least best in class, JP Morgan, to beat headline projections for earnings and revenue. That won't push the stock higher, though. What will would push bank stocks higher will be greater than a paltry 2% loan growth, and improved conditions for investment banking as well as trading.

Well, as to trading, if they fail in this volatility, then maybe those in charge are the wrong people. As always, guidance in the post-release calls will matter more than whatever knee-jerk we get from the numbers. Then if that fails, those of us long these names will have to rely on corporate repurchase managers to enter the marketplace, and on Jerome Powell to let up a little on the short end of the curve. A little net interest margin improvement might be nice, too.

Netflix (NFLX) reports this coming Tuesday after the closing bell. As always, market response will be more about both domestic and global subscriber growth, as well as pricing power, than it will be about the fundamentals. 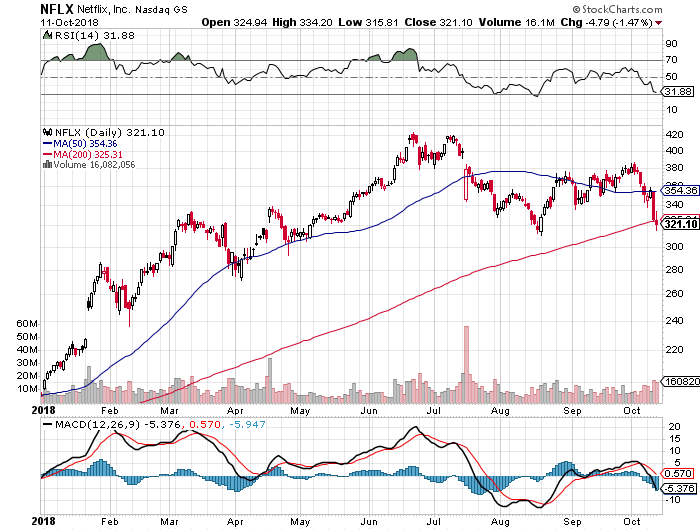 How to Trade It

Markets move. These prices will be different by the time you read this, but I think you'll get the idea. What this does is expose the trader to having to purchase NFLX at $300, or sell the stock at $340. The trader has already netted more than $20 worth of premiums here, which would be realized profit if the stock remains relatively stable through next Friday, or reduce the trader's net basis by that much if forced into either position.

Get an email alert each time I write an article for Real Money. Click the "+Follow" next to my byline to this article.
TAGS: Investing | Global Equity | Regulation | Markets | Financial Services | Technology | Economic Data | Earnings | Economy | Newsletter | Options | Politics | Stocks