How long now have I been warning, both in print and on screen, that the Federal Reserve was being far too aggressive given the landscape?

Don't let my reputation as a Fed basher cloud your judgment. I am not here to gloat. I would much rather have been wrong.

The fact is that the U.S. economy has been on a tear. Even the little piggy who had built his house made of straw had a nice place to live. That was until the big, bad wolf showed up.

There are positives. Namely, that we are at peak labor, have huge order backlogs for both the service and manufacturing sectors, and are currently in the middle of sizable inventory builds. Unfortunately, this economy is past-peak autos, past-peak housing, and despite the 2018 renaissance... past-peak retail. Have you not seen what's happening to the mall? Higher vacancies, lower rents? Not the best place to be in the business cycle.

The hard truth is that fiscal policy is too loose, and monetary policy has been too aggressive too quickly in this reality. You all know it. Tax and spend was a lousy policy. What then is tax less and still spend? Dangerous. As for monetary policy, how smart is voting for rising short-term interest rates while simultaneously draining the balance sheet? Bet you did not know that the Fed unwound $19 billion of these asset purchases just last week. Potential liquidity is a terrible thing to waste.

The only thing that the current condition of this economy and this marketplace guarantee is volatility. That is what we now have, and my gut tells me that this is what we'll need to live with for some time to come.

The easy money, my dear friends, already has been made. Bull market traders are like the wind. You might remember their faces, but never their names. Those traders who can read a corporate balance sheet, who always have done their homework and then lived by a core set of disciplines... yeah, they'll always be around because they know how to fight.

We have enemies, gang. Dollar strength is no friend, I don't care what other pundits might tell you. Never trust someone who works for someone else.

The United States is still mired in significant trade disputes. The federal government, corporations and individuals all run with way too much debt. That debt is rapidly becoming more expensive to service... more expensive to expand. This soon will impact capital spending negatively. All this, in addition to higher material costs and tighter labor markets, add up to what we call margin compression. Markets punish margin compression. Always have. Always will.

Most broadly read corporate projections are quite optimistic. Earnings are supposed to grow 19% for the third quarter and 17% for the fourth. Revenues are expected to expand more than 7% in Q3, followed by more than 6% in Q4. Even should these numbers actually be met, or perhaps exceeded, corporate guidance will need to include the margin compression that I just tried to lay out for you. This is what is currently being priced in above all else, and though it hurts, it's not wrong.

I have told everyone who would listen that the Fed was being tone-deaf to the real economy, especially given current debt levels and input costs. Now, the wolf is angry, and the house of straw is damaged.

I have been telling you for weeks to shave rallies in order to raise cash and to start managing risk differently as the selling of out-of-the-money puts would become more dangerous. It's not like I see everything first and do everything right, but I think about this stuff all the time and I have been in the middle of more than a few of these.

Perhaps the markets will come storming back and make me look like an alarmist. I sure hope so. Early-morning equity index futures markets are betting against that right now. If you do something else for a living, give your financial adviser a call. Let him or her know that you are watching. Just beware of the ones who work for somebody else. They will need to watch what they say, so as not to conflict with the public views of their employer.

What Can Save Your Tail for Now

There would be two distinct headlines that would put a bid under markets. One would be positive headlines regarding future negotiations between the United States and China on trade. The other would be Fed Chairman Jerome Powell recognizing the policy error now in progress and acknowledging so. I would count on neither.

Obviously, the Federal Open Market Committee (FOMC) is terrified by inflation. We will hear key data on consumer level inflation this morning. This release either will act as a balm on a wounded market or as kerosene on a bonfire. Helmets, flak jackets and gas masks at 08:30 ET, gang.

How does the common man or woman know where markets are? There are two things to watch that keep it simple. Gold and the transports.

Yes, tech makes the headlines. Tech was the major beneficiary of the irresponsibly loose monetary policies of the past. Tech is both the backbone of any possible future, as well a key component of key capex for almost every other industry.

However, the transports are, for me, a key indicator of expectations for economic growth. When traders sell the airlines, the truckers and the rails all at the same time, they are betting against future commerce.

Gold is another story. We are pricing in changed economic conditions. When you see the good people of Gotham buying bonds and bond proxies, it means they are becoming nervous. When the money pours into gold, particularly physical gold, that means they are terrified. The folks will not capitulate until they are terrified. We are not there. That's when you'll have a clue that things are as bad as they are going to get in the short term.

The Polish Army's 1st Armored Division still wears their patch. They are the stuff of legend. Goosebumps.

Sept. 12, 1683. The Battle of Vienna. The largest cavalry charge in planet Earth history. The turning point of a 300-year conflict. The sound of their wings.

Oh, my. July 3, 1863. Gettysburg, Pennsylvania. Custer leads the 7th Michigan Cavalry and intercepts a Confederate cavalry force three times their size led by J.E.B. Stuart on its way to attack the Union rear behind the lines at Cemetery Ridge. After almost an hour of intense fighting, the Confederate force is forced to give up their objective. Wolverines!

Three hundred and thirty-five years later, the cavalry is still on the way. The blackout period for corporate repurchases usually begins about two weeks before the quarter ends and resumes with the reporting of quarterly earnings. For many companies, we are in that period right now.

Buybacks as reported by UBS earlier this week have fallen to "near trough levels" and could triple over the next six weeks or so. Interesting. You can look it up. This is severe in comparison, but U.S. equity markets have wobbled during this period all year and then rallied as these significant buyers who both support the bid side and enforce artificial scarcity ride into the storm.

Bear in mind that thanks to the already mentioned fiscal policies many companies already have authorized huge repurchase programs. Indeed, the aggregate amount comes to something close to a record $1 trillion. Our dear friends at Apple Inc. (AAPL) make up about 10% of that number.

Run For Your Life

Maybe that's extreme. What a trader can do is run to Verizon Communications Inc. (VZ) . Yes, the S&P 500 gave up 3.3% on Wednesday. Yes, the brand-new Communications Services sector broadly back-tracked nearly 4%. Verizon is a telecom, among other things. Telecoms, back when they existed as a sector, were considered defensive in nature. Defensive names and bond proxies, known for their dividend yields, don't usually play well in the sandbox with rising bond yields. However, as already mentioned here, they do when people are becoming concerned.

Oh, this stock will not save you from a broad market meltdown. The adviser who tells you what will probably should be avoided. Yet, Verizon only gave up 1.2% in Wednesday's carnage, and quite frankly still looks technically sound.

Yes, I am long the name. I have considered this one to be "best in class" in its industry for some time. Make no mistake. This is a value stock with significant cash flow but a significant debt load. Like I say, "No sure thing." However, it does pay you 4.4% to own the shares, and it does have a somewhat captive customer base for its core business line.

My thought is that while you won't get rich in this one, it might be a good core position for investors worried about capital preservation who want to be paid something for their time. Bingo. 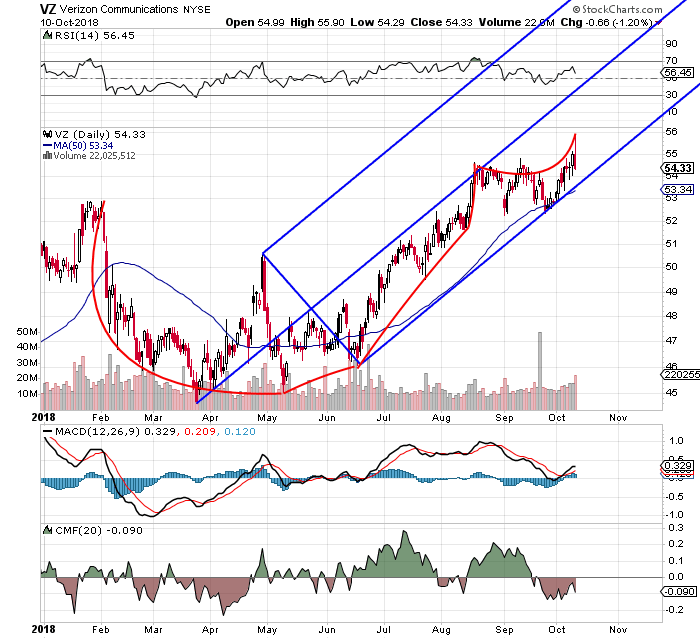 Forget about Relative Strength and the daily moving average convergence divergence (MACD), though in this case they both look OK. Money flow? Meh.

I want you to see two things. First, my Pitchfork model displays a stock the performance of which fits snugly within my lower chamber and suggests that this stock remains on trend.

Second, I want you to see the cup-and-handle formation that I tried to crudely draw on my chart for you. I am not always so sharp at spotting this formation, but this is as clear as a ringing bell. Given the depth of the cup, my bet is that I eventually can sell my stake in Verizon above $60. The Pitchfork backs up the cup and handle in this case. One note of caution -- this name regularly has relied upon the 50-day simple moving average (SMA) as a guide. Something you shouldn't lose focus on.

Well, you're still on this side of the dirt, and you hung in with me this far. I'd say that you're two and oh. Your children are counting on you. That is all you need today. No room for fear. You, my elite friends, were born for this. Now go. Win.

Get an email alert each time I write an article for Real Money. Click the "+Follow" next to my byline to this article.
TAGS: Investing | U.S. Equity | Financial Services | Technology | Telecom Services | Markets | Economy | How-to | Risk Management | Stocks