In 1897, you could purchase a fine alligator pocket book from the Sears catalog for 50 cents. In 2018, you could buy a share of Sears Holdings Company (SHLD) for less.

Shares of the troubled retailer dipped 17% in Wednesday's trading to close at their lowest level ever. The stock fell as far as $0.36 in early morning trading.

The race to zero quickened its pace on Wednesday as news that the company has hired multiple debt restructuring experts from both M-III partners and Drivetrain Advisors indicates a default on $134 million in debt could be imminent.

"Sears is fascinating," Real Money contributor James "Rev Shark" DePorre said in his column this morning. "Much like a car wreck."

Sears has come under significant strain as the company has been unable to adjust to the changing retail landscape.

The company has been unable to do so mainly due to its massive debt load. 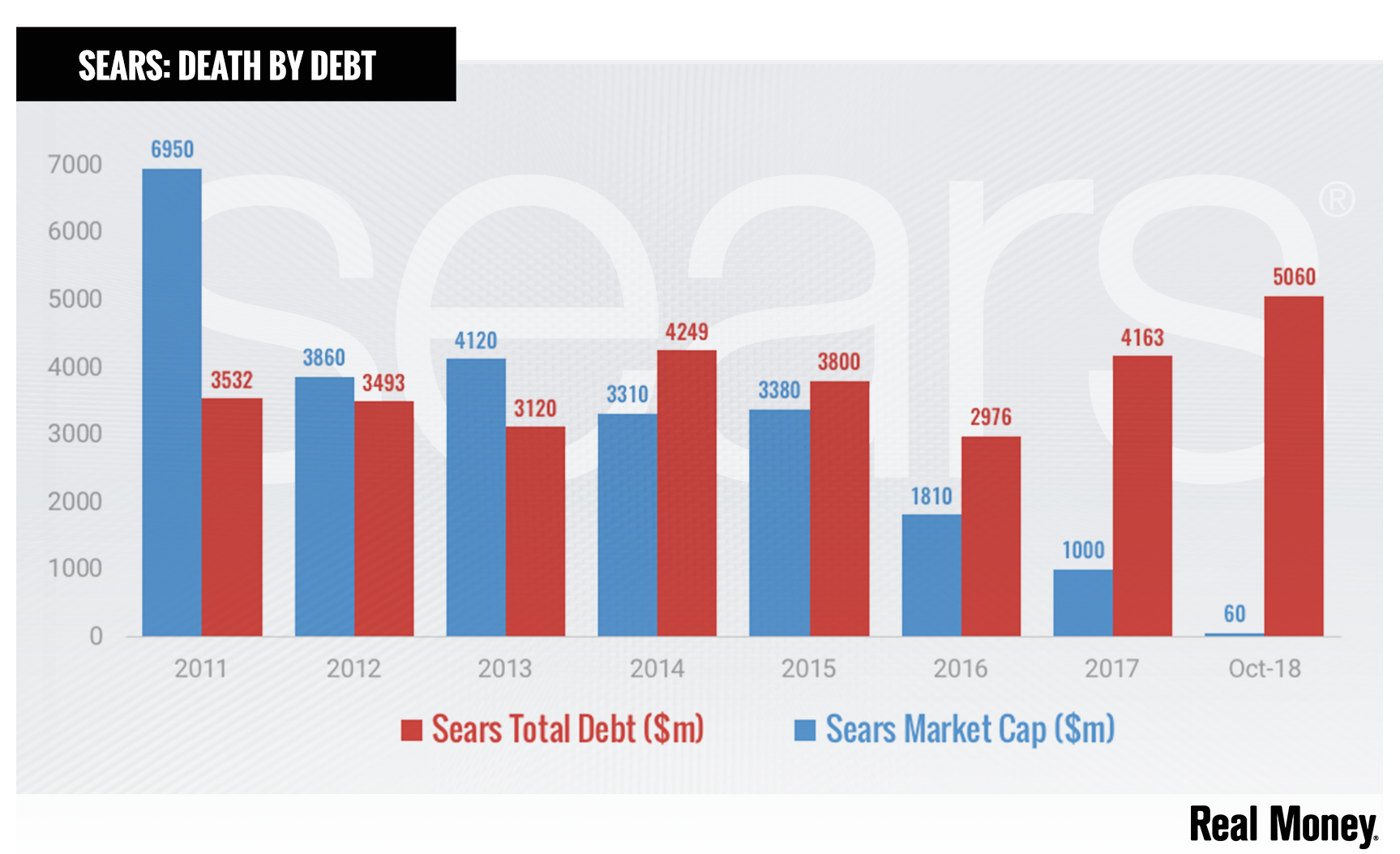 "The debt load is what kills these companies," Jan Rogers Kniffen, president of retail consultancy J. Rogers Kniffen Worldwide Enterprises, told Real Money. "It keeps the company from reinvesting in the business when they really need to be."

He added that the need to reinvest and reinvigorate retailers has been amplified by the presence of Amazon.com Inc. (AMZN) and its propensity to eliminate lagging, older competitors.

With too much debt on the table, Sears' stumble might be too much to recover from in the face of such competition.

"I think the debt levels that the company has acquired in trying to right itself are too high for the company to come back from," Real Money contributor David Butler said tersely in his analysis in September.

If true, Sears could be added to a list of companies such as Toys R' Us, Circuit City, and Sports Authority that serve as cautionary tales about over-levering a company.

The pain for the company might yet drag on competitors as a parting gift to the retail sector as well.

"In the short term, you will get liquidation that will add a little pain for the retail sector," Stacey Widlitz, President at SW Retail Advisors told Real Money. "This isn't great timing for retail as we head into the holidays."

She explained that competitors will feel a pinch on profits in the short term as Sears' liquidation prices undercut their products.

Our own Jim Cramer added that share recipients in the home improvement space like Lowe's Companies Inc. (LOW) and Home Depot Inc. (HD) will be sorry to see a consistent share donor exit the industry.

"This is bad news for Home Depot and Lowe's," Cramer explained on CNBC's Squawk on the Street. "Sears has been a share donor for years.

To be sure, Widlitz said that the retail sector will be much healthier sans Sears in the long run.

"Competitors will feel a pinch once bankruptcy comes, but in the long term this will leave a healthier sector," she said. "Sears' market share is crumbs, but however small their market share is, it has to go somewhere."

She explained that while competitors like Burlington (BURL) , TJX Companies (TJX) and Macy's (M) may see some moderate gains after four to six months, the short-term squeeze will hamper the nearer term.

As DePorre put it in his column Wednesday morning, Sears is not an investment vehicle.

However, it offers interesting lessons and plays on the broader retail sector and intertwined Lampert-run entities like Seritage Growth Properties (SRG) .

Additionally, as Sears is set to slink off into the memory of retail investors if it does shutter its doors, its failures will offer important lessons for investors to be mindful of.

While the Market Takes Amazon to the Woodshed, I've Been Adding to It

The lower growth rate is understandable given that the firm is lapping what was an incredible year of growth where the public largely relied on them for everything.

Politics Are Impacting Markets in a Number of Ways

There are at least three key political questions playing out.

Haynes Continues to Strengthen Its Lead in My Active Portfolio

Here's the latest update on my Triple Net Active vs Passive portfolio.

The Technical Risks and Rewards of Trading DexCom Stock

DXCM is now trading above the rising 50-day moving average line and the rising 200-day line.