It's mid-October. Up until now, it has been too early for neighborhood children to get very excited over Halloween. Some of the houses have been decorated. Pumpkins, hay bales and plastic skeletons are starting to show up more and more as we head into the later part of the month. If anyone cares, I plan to be Chewbacca this year.

One character that I will not pretend to be this year will be the secretary of the U.S. Treasury, Steven Mnuchin. The International Monetary Fund (IMF) and the World Bank Group will hold their annual clambake in Bali later this week. The G-20 will throw their shindig in Argentina later this month. That's a whole lot of warmth and togetherness. It's also high-profile. This may also be the main reason that Steven Mnuchin has not yet labeled China a currency manipulator despite the renminbi's 10.9% devaluation versus the U.S. dollar in just five months' time.

According to a Financial Times interview published overnight, Secretary Mnuchin claims to have seen no sign of damage to the U.S. economy directly attributive to the trade war with China, with the exception of "specific localities" that have been targeted by the Chinese. However, Mnuchin has warned China against the competitive devaluation of its currency, even while acknowledging that aside from the overt dispute over trade the Chinese currency is suffering from other pressure, including China's own domestic economic slowdown and the broader weakness seen across emerging markets.

Who remembers the Cold War?

OK, who remembers camouflaging their foxhole with snow and ice and then hoping the sun would come out so the water in your canteen might just melt a little?

I see most of the hands went down.

Was Alibaba Group Holding's (BABA) Jack Ma correct when he said this trade war could last 20 years? Who can say?

One thing is certain. China is not likely to capitulate easily, particularly ahead of our own midterm elections if it feels support for the current U.S. administration might wane.

You know what sells at a premium during a cold war? Weapons. High-tech weapons. Anti-weapon weapons. This is one reason for me not to bail on the aerospace and defense industry regardless of volatility across the industrial space, and regardless of rising material costs. Navies are especially expensive to run. Navies also happen to be where the Chinese government seems to be focusing its defense budget, and how the United States historically has projected its own power globally.

Taking a glance at the big defense names, Boeing Co. (BA) , Raytheon Co. (RTN) , Lockheed Martin Corp. (LMT) and Northrup Grumman Corp. (NOC) have all outperformed General Dynamics Corp. (GD) year to date, and it's not close. (Raytheon is a holding of Jim Cramer's Action Alerts PLUS charitable trust.) GD is only up 0.35% YTD. I happen to be long those first four names for what I consider to be good reason. I am flat GD and have been for a good while.

Know what? You kids ever hear of the Virginia Class submarine? How about the Columbia Class Ballistic Missile submarine? Now,.... ever hear of "Electric Boat"? That's the General Dynamics design yard where these programs are both housed. For me, it's time to reconsider GD, ranked near the bottom of this group in terms of forward-looking valuation and in the middle of the pact as far as profit margin is concerned.

The Materials Select Sector SPDR Fund (XLB) had an awful day on Tuesday. In fact, that fund is off nearly 8% for the year.

What spooked yesterday's rout? That's obvious. Rising input costs. PPG Industries Inc. (PPG) warned of higher raw material costs mixing poorly with waning demand in China. Peak autos? That's not a real help here, either. Jim Cramer has covered the PPG story for you up, down, and sideways (and he touches on it again this morning). Indeed, I think Jim was the first person in the industry to publish an opinion on this.

Folks are expecting earnings growth of slightly more than 19% for this third-quarter earnings season on revenue growth of more than 7%. Guess how much Q3 out-performance is going to matter to traders? Try this much ><. Guidance in the face of current trade conditions, the state of labor markets and a hostile central bank are what will matter. Those best equipped to adapt to a less traveled path will do well. Those ill-equipped, or unprepared? Let's just say it might not be pretty. So, tape on the foil.

It was just yesterday that Dallas Fed President Robert Kaplan mentioned his preference for three more rate hikes before making a decision on whether even more are necessary. What? That would leave the Fed funds rate at 3% by mid-year.

Remember the term "breakaway speed". This is a term used by central bankers of yore to describe an unknown measure for the velocity of money that would be required for the broader economy to sustain itself without monetary accommodation.

The somewhat-dangerous fiscal policies of the current administration were obviously something of a "Hail Mary" pass after 10 years of recessionary-like conditions in the real economy that left most Americans in pretty rough shape. The object of the administration had been to lift that velocity of money to that somewhat mythical level before the Fed could kill the baby in the cradle.

Listen, we'll get numbers on September consumer level inflation this Thursday. That Core CPI (Consumer Price Index) number has been above 2% for six, going on seven months now. I understand Fed Chairman Jerome Powell's fear, but the greater threat to this economy.... is to force higher both business and individual borrowing costs while simultaneously draining the pool of potential liquidity. Hello. Am I the only guy here who has dug a hole in the ground or lugged bags of cement for a living? Pay attention.

On Tuesday, the Dallas Fed's Kaplan also admitted that it would be difficult to know precisely where the boundary between accommodative and restrictive monetary policy lies. You don't say? The Fed chair discussed last week a willingness to overshoot on policy. Hmmm? Ever move through the forest at night? You go slowly. This way, nobody gets lost and nobody breaks an ankle.

Paul Volcker once proved that if you have to, you can catch consumer level inflation from behind. My thought is that while that is dangerous in itself, this current policy is ahead of current conditions and balance sheet management only makes the path that much more unknowable. Take a powder, guys. Let the velocity of money find its own way with tapping the breaks every two months. You were born with the ability to reason. Maybe, try giving it a shot. Dear FOMC... If this is beyond your depth, I answer my e-mails.

Takes A Licking and Keeps On Ticking

Timex? No. I am sure that you have noticed the broadly disputed story last week that 30 or so tech companies had purchased servers that came complete with Chinese government spy chips, free of charge. I am sure you noticed consumer electronics giant Apple Inc. (AAPL) among them. Then, I am sure that you noticed Greenlight Capital's announcement that it had exited the name for a couple reasons, among them.. retaliatory Chinese tariffs.

However, the stock keeps on keeping on. The name does not appear to suffer along with other tech stocks. The name does not appear to suffer with other consumer discretionary names. On Monday, Citigroup analyst Jim Suva raised his price target for AAPL from $230 to $265. Suva also raised his fiscal 2019 EPS estimates to a well-above consensus range of $13.92 to $14.43 on Apple, which is another holding of Jim Cramer's Action Alerts PLUS charitable trust.

Then, on Tuesday, Bank of America Merrill Lynch analyst Wamsi Mohan reiterated his "Buy" rating on AAPL and reaffirmed his price target of $256 plus his fiscal 2019 EPS estimate of $14.41, already toward the high end of Suva's range. Why? Mohan cited his own firm's survey of 91,000 global consumers. They found that 33% of iPhone users planned to upgrade to the newly released, more expensive models, while this measure of planned loyalty only came to 15% for Samsung. Interesting. 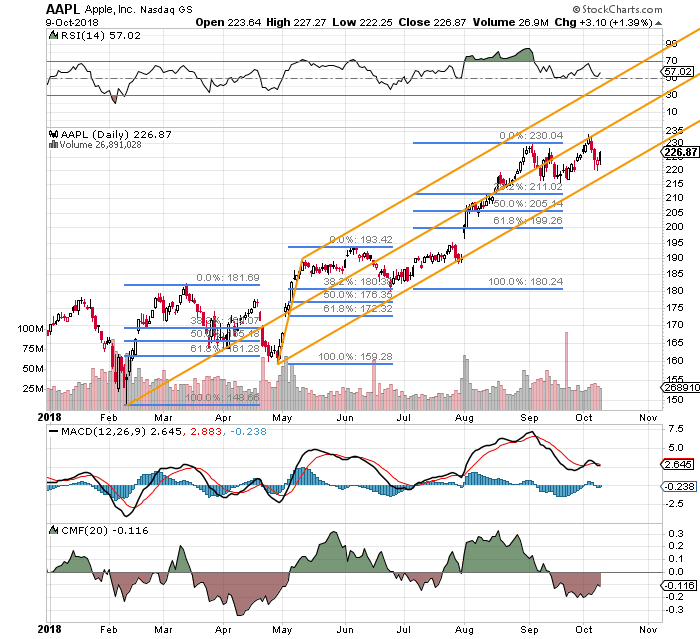 I want you to see that, despite the sloppy moving average convergence divergence (MACD) and lousy money flow, that Relative Strength remains just fine, and this name continues to obey the Pitchfork. Do I want to own AAPL? You bet your tail I do. I'm trying to price my entry. That's another thing. I was hoping to catch a significant discount on a market downturn. So far, that has not happened.

The name reports on Nov. 1. I am already short a plethora of AAPL put options with deeply discounted strikes, a few of these expiring in November. This does provide revenue, buy unless a disaster truly hits, no equity stake.

At least until earnings, I will maintain my discipline. That means that if I can get $220 or cheaper, I will leg in with 12.5% of my intended position size. Or one could.....

In other words, the trader is risking a net $1.82 on these transactions to try to profit to the tune of $3.82 on a post-earnings sell-off that leaves the trader with an equity stake at a net basis of $216.18. Not bad for stock that closed last night at $226.87.