We reviewed Estee Lauder Inc. (EL)  in early May, writing that "EL has declined sharply the past two weeks even though Wednesday's price action was more eye catching. Spillover selling towards $125 where the rising 200-day moving average line intersects would not be surprising in the short-term. Support could materialize around $125 but I would not be the first bidder."

EL staged a reversal short of $130 and rallied to a new high in June. That strength did not last long and prices made a new low for the move down in August. Prices grinded out another rally into early October but they have returned again to the $130 area. Prices may have outlined a nine-month top pattern.

Let's check out the latest's charts and indicators on this name discussed by Jim Cramer Tuesday night on Mad Money.

In the daily bar chart of EL, below, we can draw a "neckline" across the $130 level over the past nine months. Prices are below the flat the 50-day moving average line and below the cresting 200-day line, which is telling us that we have shifted from an uptrend to a sideways trend.

What is odd or dangerous is that the On-Balance-Volume (OBV) line has been moving upward from early May. This suggests that buyers of EL have been more aggressive even though the best level on the chart was back in June.

The trend-following Moving Average Convergence Divergence (MACD) oscillator has just crossed to the downside for another take profits sell signal. An outright sell signal is close at hand as the indicator is nearing the zero line.

In the weekly bar chart of EL, below, we can see that prices are below the 40-week moving average line and the slope of the line is cresting or peaking.

The weekly OBV line is pointed down from a lower high. The two moving averages that make up the weekly MACD oscillator are very narrow and could cross to the upside or downside depending on the price action.

In this Point and Figure chart of EL, below, we can see a distribution or selling pattern. A trade at $128 could start a decline toward $117 -- the point and figure price target. 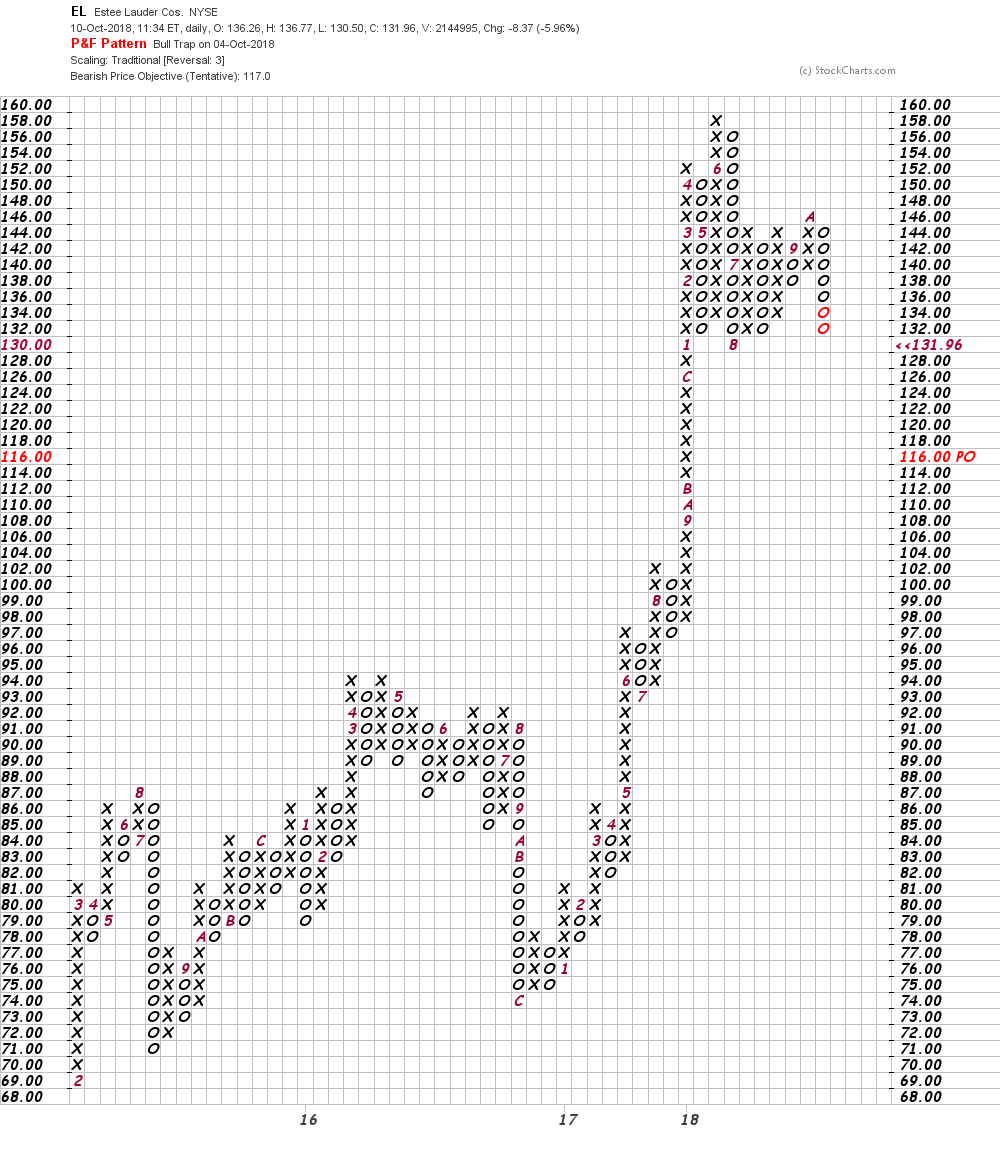 Bottom-line strategy: When you stand back a bit from the charts of EL you can see a large nine-month top formation with a "neckline" around $130. This top pattern measures to a $105 downside price target (the distance of the neckline to the top of the head in June subtracted from the neckline). Traders and investors should get out of the way.