Walt Disney Co. (DIS) was discussed Monday on Jim Cramer's "Mad Money" show. Jim unveiled "Cramer's Power Rankings" -- his top five stocks in a sector. Communications was Monday's sector, which includes telecom, media and video game companies. Jim's top pick was DIS. Let's get a pass to one of the parks and visit the charts and indicators of Disney, which also is a holding of Jim's Action Alerts PLUS charitable trust.

In this daily bar chart of DIS, below, we can see a stock that does trend, up and down, but with many corrections along the way. The pullbacks every few weeks are unnerving to me. In May DIS starts an advance that carries up to early August with a retest of that high made recently. Prices are above the rising 50-day moving average line and the bullish 200-day line, but a retest of the 50-day line could happen in this currently weak equity environment.

The daily On-Balance-Volume (OBV) line shows strength and aggressive buying from May and even a new high recently. The Moving Average Convergence Divergence (MACD) oscillator is poised to cross to the downside for a take-profits sell signal.

In this weekly bar chart of DIS, below, we went to late 2013 to show the size of this pattern. This multiyear consolidation potentially could support a very large move higher. Prices are above the rising 40-week moving average line. The weekly OBV line, however, shows a long decline and a neutral period more recently. The weekly MACD oscillator is bullish and pointed up.

In this weekly Point and Figure chart of DIS, below, we can see a weekly breakout at $118. Maybe an upside price target will be generated on Friday. 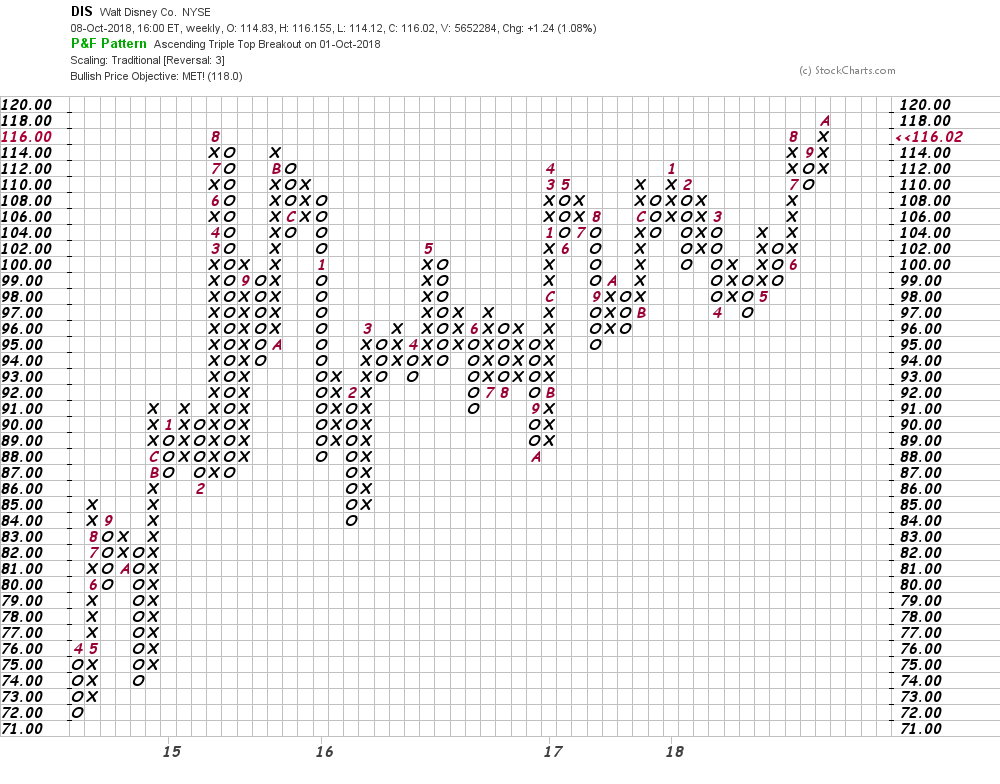 Bottom line strategy: DIS fans have three charts to consider. In the short run DIS could correct to the downside. Longer term, DIS could stage a major move up from here. Maybe a trade above $120 will do it. Stay tuned.

Get an email alert each time I write an article for Real Money. Click the "+Follow" next to my byline to this article.
TAGS: Investing | U.S. Equity | Consumer Discretionary | Entertainment | How-to | Gaming | Mad Money | Risk Management | Sports business | Stocks